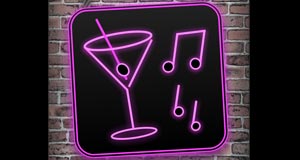 John Godber’s play Bouncers is, in the playwrights own words, a ‘grotesque’ comedy of exaggerated characters, and the ‘Poor Player Productions’ version of it looks set to practically ooze this. The play, with a cast of four, is based around the preparation for a big Friday night, and moves fluidly from one set of characters to the next, culminating in a well-executed finale.

The four actors in the production rotate between extremes with ease, not only limited to character. Completely in control of their sound and movement, the players here command their stage entirely, and convincingly and effortlessly morph between the different sets of characters.

These include (but are not limited to) the nightclub bouncers of the title, the ‘girls’ before the big Friday night out and the ‘lads’ (or perhaps, more appropriately, ‘ladz’). The juxtaposition between the almost aggressively hilarious masculinity of the bouncers and the boys and the ridiculous femininity of the girls is pulled off well.

Both the play and the players are also comically self-aware. The group of bouncers mocking lads in general brings ironic layers into the performance: the actors imitate and caricature not only as themselves but as characters mocking other characters.

Disorientating as that may sound, this production group does bring it off persuasively, and as an audience member you never feel left out of their jokes. The exaggeration of the comedy brings the audience completely on side, particularly in the near ritualistic scenes of the lads getting ready – you’re laughing with them, and yet it doesn’t feel forced: something quite rare in such extravagant comedy.

Bouncers is more than just a romp through the potential to parody a night out however, and the cast do show glimpses of true emotion underneath, and sometimes through, their ridiculousness.

The ludicrous images the characters, especially the bouncers themselves, build up are only occasionally permeated by the back stories that turn them (just) into people, and the very rare instances of this emphasises the grotesqueness of the majority of the play.

Many of these result in almost scary fights or near fights, the excellent direction of which is indicative of the fast-paced yet well thought out work of the two co-directors, Adam Leonard and James Watt, throughout the production.

It begins and ends, of course, with the bouncers, and these are the most convincing and comedic caricatures in the production. At the very least, they will make you snort, and, more likely, the whole play will have you laughing – easily worth a visit.