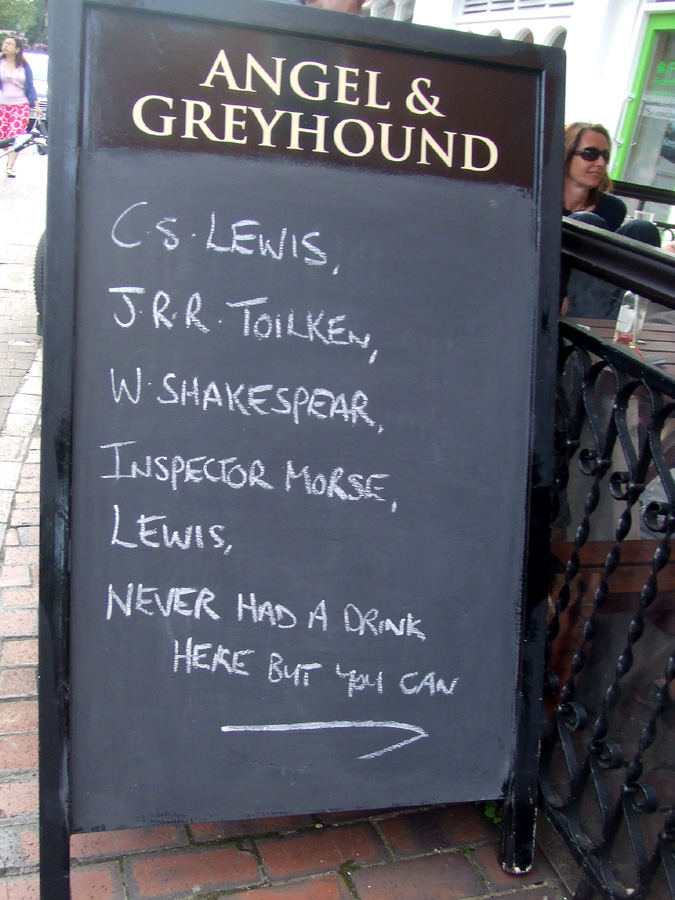 A pub that can barely justify its claim to be a Cowley local, the Angel and Greyhound sits on St Clements, just off the Magdalen roundabout. The unremarkable outside, littered with picnic tables and clad in unattractive red brickwork, is drab enough that we came perilously close to beating a hasty retreat. The hanging Young’s sign, with its promise of sterile mock-antiquity, did little to dispel the impression. The judgement was too hasty, however; this is a fine example of a well done suburban pub with a solid selection of drinks, a pleasant atmosphere, and enough unique features to hold interest.

Despite the time (2pm on a Tuesday, a damning indictment of our work schedule), the Angel and Greyhound had one of its two fires roaring and a surprisingly young clientele cosied on the tweed and leather armchairs. The bar itself was spacious, well stocked and warm, with a friendly, professional but laid-back landlord buried in the crossword as we entered. In classic Young’s style, there was a drink for everyone here: as well as the brewery’s standard ales, there was a unexpected selection of European lagers, some exceptional spirits that included a particularly fine port and a pretty good wine list. It’s even one of only four pubs in the UK that serves Young’s chocolate stout. Being a particularly vile drink, this isn’t entirely surprising.

This was essentially a nicer, cheaper King’s Arms. The same olde worlde photos of an Oxford that is far past, or perhaps never existed, including a particularly strange series of grocery murals; the same unclassifiable wooden panelling and expensive upholstery that fulfills the cliché of what a British pub should look like. There’s more here, however, including a bizarrely wide selection of board games, a peculiar baize-based cross between billiards and pinball that slightly defeated us and a particularly strange selection of banjo playing guinea pig models nestling among the wines. These eclectic additions remove the drinking-society pretentiousness that pervades the KA.

The space is well laid out, affording private areas without being oppressive or constrained; the sense of a cosy inn was here in force. You were naturally led through to the large beer garden (really more of a patio). At first extremely uninviting in the bucketing rain, this grew in promise as the afternoon sun lengthened and the second pint sunk in. This coincided with the pub beginning to busy, until – by 4pm – the atmosphere was pleasantly jovial.

There were a few downsides to the Angel and Greyhound. The bar snacks were overpriced and Dickensianly gristly, palatable only when dowsed in mustard. A particularly ugly ATM seemed an entirely unnecessary addition, and, positioned between two games machines, lent a slightly arcade-esque feel to the back of the pub. The bathroom facilities slightly gave away the game of a commercial pub dressed up, as they certainly clashed horribly with the clean and welcoming bar.

This is an ideal pub for a lazy Wednesday afternoon, where a superior option to work is a couple of pints and a catch up with an old friend – though we do suspect it busies significantly with locals and students in the evening. It’s not angelic, but it is a worthy alternative to Oxford’s better known establishment.