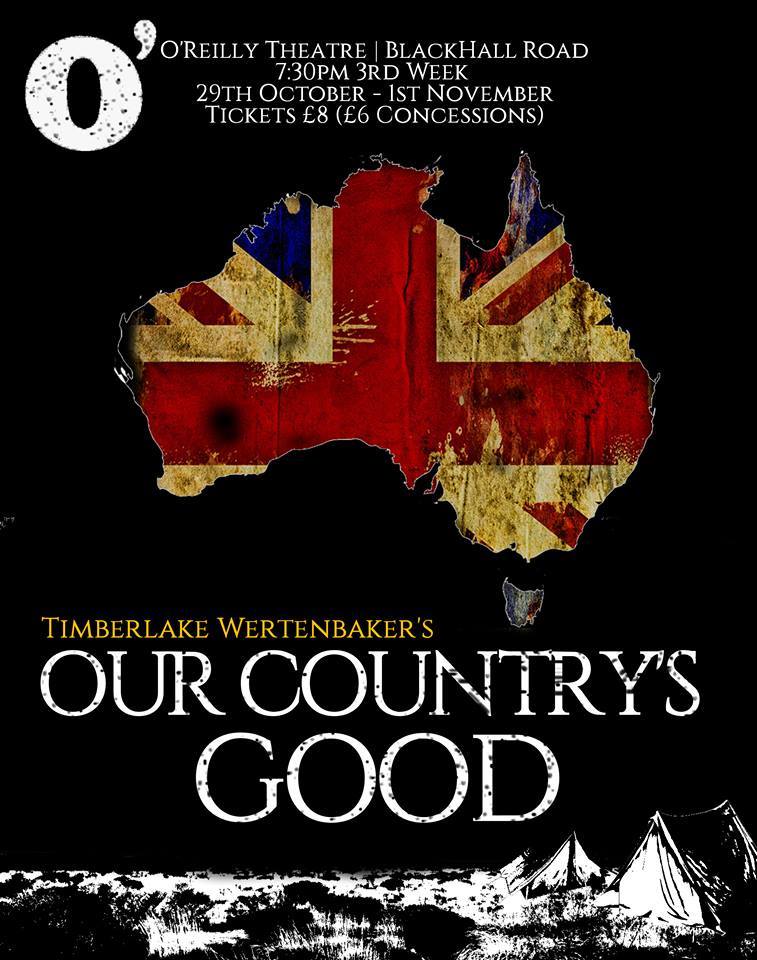 Timberlake Wertenbaker’s politically charged Our Country’s Good comes to Oxford’s Keble O’Reilly theatre in 3rd Week. Situated on a convict ship headed to Australia in the 1780s, the play is packed with love triangles, power struggles, and clever dialogue.

The crux, however, is the staging of a play within the play itself, completely altering the relationships between the characters as all are leveled on the stage. As their involvement with the theatre gradually softens the hearts and minds of the convicts, the play raises vital questions about the role of art in convict rehabilitation. Director Fay Lomas describes how controversy over banning books in prisons made her keen to put on the play: “I heard Chris Grayling being interviewed on the radio trying to justify the ban and ended up shouting at the radio in frustration. It really got me thinking about the importance of art/ literature as something for everyone, and about the role art can play in rehabilitation.”

The play sees convicts find their voices and learn about themselves through theatre, unfolding in the shadow of one execution, and under the looming threat of another. The dichotomy created is clear: either convicts and leaders can come together to better themselves through theatre, or the group can self-destruction as those in charge exploit their power over those below.

The power relations between the cast are at the heart of the play’s dramatic tension, as Lomas aims to stress visually by creating a literal hierarchy with blocks on the stage. The ground level is the confine of the convicts, only allowed to progress up onto higher levels when acting in the play. Though the metaphor is clear and striking, it will be interesting to see how the cast succeeds in playing this out without disrupting the movement of the play.

Dominic Pollard and William Yeldham do a good job, however, with their testosterone-fuelled contest as Ralph and Wisehammer trying to win the affections of Mary, played by Alannah Jones; it fits perfectly with Lomas’s stage concept, as the two of them subtly air their grievances with Mary nervously shuddering between them.

Mary’s part, played by Alannah Jones, is set to be more challenging than those of Ralph and Wisehammer. The female characters are given a more passive role, so that much of their acting relies on body language, something that presents an inevitable challenge. Jones calls her character “frustratingly shy,” presenting a “compelling contradiction of worldliness and naivety.” It’s an absorbing combination, and hopefully Jones’s female cast members will fill the role accordingly. Another difficulty that faces the cast is the multi-rolling, as all the characters but Ralph play dual roles; Lomas takes the same approach as Ralph within the play – the difficulty can be turned into an advantage.

While it’s hard to see how a play set on an 18th century convict ship could be relevant and engaging to an audience today, Our Country’s Good is set to grip its viewers firmly. Its metatheatrical elements keep the audience thinking about their role, and the role of theatre, equally keeping Lomas on her toes.

Directing Ralph to act as director “is really rewarding because of the way it makes you more conscious of your own process of creating a show,” she says. The thought and passion going into the play at this early stage is set to result in a thrilling and entertaining watch – don’t miss out!

Thierry Lhermitte: An audience with one of France’s top comic actors