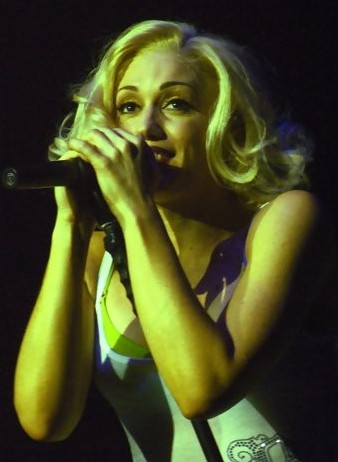 All Hail The Return of Gwen Stefani

Casual consumers of pop music could be forgiven for believing Gwen Stefani already returned to us on the radio this past summer. ‘I’m so Fancy/you already know’ blared from speakers of all sizes across the land. That hook. That delivery. It was trademark Gwen. And yet she wasn’t. It was Charli XCX, dropping the self-consciously cool pretension of her solo work in favour of Iggy Azalea’s career-making global smash. ‘Fancy’ would go on to sell over six million copies worldwide and top charts around the world. We were clearly starving for some Gwen Stefani. Thankfully, she heard our prayers (and probably the ringing of cash registers) and has deigned to return to us, with both a new single and a new album promised by the end of the year.

But why do we need Gwen Stefani? What has she really done for us? In a pop music landscape still exhausted from 2013’s EDM fatigue, the charts have collapsed into a stagnant pool of tired sounds and directionless misfires. Sure, we’ve seen Beyonce champion a more experimental style of RnB, Lorde place her alt-pop stylings firmly in the mainstream, and Ariana Grande resurrect the ghost of Mariah Carey, but there’s been no era defining song in the way that Gwen’s “Hollaback Girl” launched an unending stream of imitators back in 2005. Even the House revival and the beginnings of a Trap-lite movement with the one two punch of “Dark Horse” and “Black Widow” have yet to yield a visionary to guide us. Perhaps then it’s the job of Gwen, along with her fellow comeback queen and class of ’07 hitmaker Fergie, to reimagine the urban influences of their glory days. Early signs are positive. Gwen has been in the studio with frequent collaborator Pharrell, the producer behind perhaps both’s most enduring creation, the “B-A-N-A-N-A-S” chant of “Hollaback Girl,” and, if gossip sites are to be believed, she’s reunited with the director of her most iconic videos. The world is holding its breath. The second coming is upon us.

It couldn’t have come soon enough. In an increasingly sterile pop music landscape, where every walk from a hotel to a waiting car is stage managed to within an inch of its life, Gwen promises at least a little rebellious spontaneity. Stuck for much of the 90s, along with the rest of her band No Doubt, on the sweaty, grimy merry-go-round known as Warped Tour, Gwen is hewn from the rough and ready aesthetic of the rock arena. She’s a contradiction, all feminine iconography backed by masculine bravado. She’s an aggressive and unpredictable stage presence with perfectly styled blonde hair and perma-stained red lips. And she’s already going off script. She messed up Stephen Colbert’s name while presenting him with an award on live TV. She joined the American version of The Voice, a show ostensibly built on the importance, of you know, the contestant’s voice, and then immediately dismissed the idea that being able to sing wa simportant to being a star. And she spontaneously skanked on Jimmy Fallon’s talk show, the cultural sinkhole of America’s late night circuit, where celebrities playing beer pong is about as close to counter culture as it gets.

The secret to Stefani’s appeal is that she doesn’t take anything too seriously. She’s dismissed her solo career as a “joke,” which as ridiculous a description as it is for almost ten million record sales, comes as little surprise to those that paid attention the first time around. This is a woman who twice rode samples from classic Broadway musicals to worldwide success – the Fiddler on the Roof’s “If I were a Rich Man” became “Rich Girl,” a delirious ode to the joys of materialism and couture designers, followed by the feverish, insane “Wind It Up,” which took the yodelling from the Sound of Music’s “The Lonely Goatherd” and wrapped it around a bombastic club beat. We need Gwen Stefani because she understands that pop music is inherently ridiculous. It’s disposable, vacuous, and utterly joyous. It’s made for preteen girls to sing into hairbrushes, for the gay clubs and for gym mixes, for the blogs who need new music to keep their twitter feeds ticking over 24 hours a day. Gwen’s dismissive treatment of the genre is at the heart of her appeal. The woman whose yodelling was heard around the world is going to save pop music from itself.

But this isn’t to say that Gwen Stefani exists outside the current pop production line. In fact, she lay the foundations for much of its architecture. By parodying the artifice of pop music, Gwen, after Britney, inadvertently created the modern pop star, an entity whose personality is defined by whatever outfit they’re wearing. Gwen as a Cheerleader, Gwen as Alice in Wonderland, Gwen as a Pirate. She put on these costumes, ringing every last drop of ridiculousness from their threadbare material, before moving onto the next. Without her there would be no Katy Perry, no Lady Gaga. But Stefani’s personas only worked because underneath it all, we knew she was the commanding frontwoman of No Doubt, a fierce, multifaceted performer who just liked to hang with the guys. Her imitators may have raided her costume box, but they’re all pageantry and no personality.

And yet, questions still loom over how Gwen will fit into the current pop music landscape. How will we respond to her new songs, with our ears already exhausted from Pharrell’s ubiquity? Will her bindis and her travelling troop of Harajuku girls spark untold numbers of outraged think-pieces across the web, in an age attuned to issues of cultural appropriation? To her fans, appreciation has always lain at the heart of her appropriation. It was another part of her slipping into costumes, too self-conscious to be taken seriously. To others, it seemed at best misguided, at worst offensive.

However, one trend she could surely slide right into is the popularisation of feminism. Whilst hers is certainly a different feminism to that espoused by Beyonce, and to a lesser extent, Nicki Minaj, its no less a valid interpretation. Her image, already one that draws attention to the performative nature of femininity, is a walking gender studies class. By making her name in the boys club that was 90s pop-rock, she’s drawn attention to double standards and misogyny, whilst at the same time exploiting her desirability. From the angry, subversive “Just a Girl” to writing the searing breakup anthem, “Don’t Speak,” and making its target, ex boyfriend and No Doubt bassist Tony Kanal, play it every night as she sang it to crowds of thousands of cheering fans, Gwen has always been fearless. Perhaps she’s also ready to be a feminist.

Ultimately then, whilst some pop stars fight to legitimise pop, worshipping at its altar as they try to imbue it with meaning, Gwen does the opposite. She makes pop records just because she can, because she wants to mess around, get paid and dress like a cheerleader throughout her adult life. It’s the fact that she operates at something of a remove from the pop world which puts the meta-textuality in her madness. She is always, brilliantly, aware of the limits of the medium. Pop music needs Gwen Stefani precisely because she doesn’t need it.

Plus there are always more fruits she can teach us to spell. Cantaloupes, anyone?