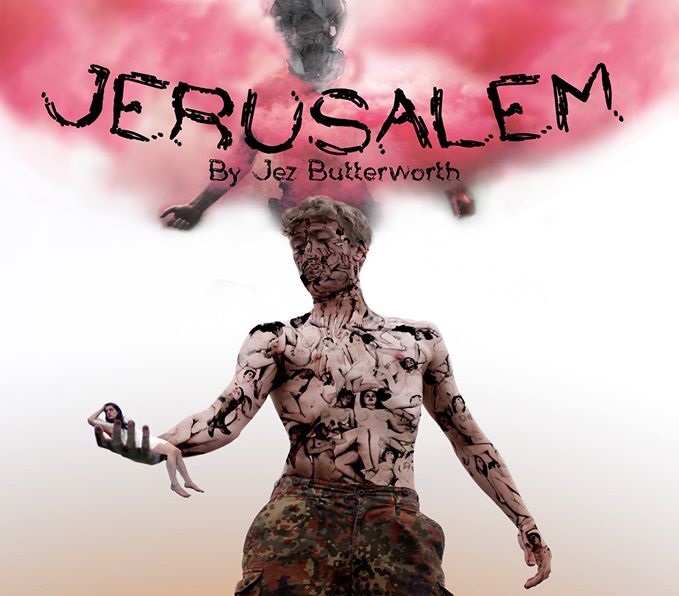 Will Felton has a vision. In the Wiltshire countryside youths in pagan masks dance around the shadow of a caravan, intoxicated by the heady combination of music, drugs and isolation. Add to this a live folk band, punchy dialogue, flares, strobe lights and chickens and you have a play: Jez Butterworth’s Jerusalem to be precise.

The play, first played to audiences in 2009 at the Royal Court Theatre, was an instant success, The Times calling it ‘bold, ebullient and often hilarious’ and The Daily Telegraph describing it as tender and touching with an ‘exceptionally high swear word count’.

It centers on the character of Johnny ‘Rooster’ Byron (Barney Fishwick), a modern-day Pied Piper who lives on the edge: wanted for eviction by county officials, hosting raves in the woods and supplying drugs and alcohol to his friends.

Bursting with fantastical theatricality, it’s the contradiction between this and more intimate scenes, honing in on the unsustainability of Rooster’s lifestyle, which first attracted Felton to the script: the play’s dynamism and larger-than-life characters certainly came across as two of its strengths during the preview, as did the sense of fun and energy in rehearsals.

It is Felton’s fourth play in Oxford, and the last before taking finals later this year. His top advice to fellow directors is to choose content carefully and ensure proper knowledge of budgets and technicalities before approaching theatres with a bid; when asked what people should look forward to most about his upcoming production he was quick to answer: visual effects, a television smashed with an axe, and a spectacular woodland set.

Running from the 5th the murkiness,” is sure to be a success. With its imaginative approach – think whimsical, hand-made masks and a throne made from car tyres – and a well-known cast on the Oxford drama scene, the play promises to expose the darker side of fun.