Wadham’s reintroduction of scholars’ dinners has caused controversy among the College’s undergraduates.

Despite not holding scholars’ dinners for a number of years, Wadham sent out dinner invitations to second-years who were awarded scholarships on the basis of their results in last year’s exams.

The invites read: “The College is pleased to celebrate the collective achievement of this year’s scholars and recent finalists. To this end, the College would like to invite you to an inaugural celebratory dinner in Hall on Saturday 1st November. We do hope you will be able to attend this first of what we hope to be an annual event in celebration of academic success.”

The invitations caused opposition among Wadham students, after emails were not sent to some high-performing prelimmers. Sean Bullock, an Oriental Studies student, received a first in Prelims but was not invited to the dinner.

He posted a picture of himself eating dinner on Facebook with the caption: “Hope you’re all enjoying your morally-decrepit Eurocentric scholars’ dinner. No first-students from Oriental Studies were invited so we must all be irrelevant. I will enjoy my tomato rice with pride.”

However, others suggested that Oriental Studies students were not invited due to clerical error or tutors’ prerogative.

Another Wadham student commented on Facebook: “Regardless of technicalities, whether people weren’t invited due to euro-centrism or a clerical error, the fact that College held this dinner is morally objectionable. Hopefully, the people who are raising the issue that they weren’t invited are raising it in order to undermine the dinner itself.”

She continued: “Hard work and intelligence are not the only things that contribute to a first – there are so many other sensitive factors which can determine which classification you get and the College has ignored all of those by holding this dinner.”

One third-year Wadham historian told the OxStu: “I don’t particularly mind that those who’ve done extremely well and worked very hard to get a first get a chance to be celebrated, though God knows getting a first from Oxford is celebration enough, and the SU was consulted about it. But this cannot be divorced from the Warden’s supposed agenda of pushing Wadham away from being the “progressive”, “party” college and towards being more “respectable” and “academic” This while Wadham is top fice in the Norrington tables. To many students it’s quite divisive. The outrage is more about what scholars’ dinners represent rather than the dinners themselves.”

Deans clamp down on snow fun 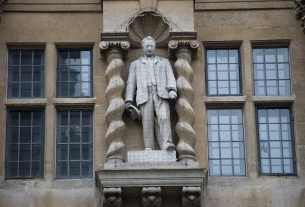