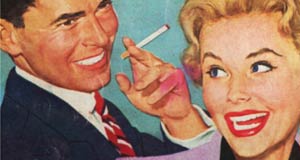 Review: Dahling You Were Marvellous!

There’s a moment in Berkoff’s Dahling You Were Marvellous when a group of thesps vent about a particularly nasty specimen of theatre critic: “He said my acting could cure insomnia – imagine reading that the next morning over your muesli.”

The cast can be pretty confident they won’t provoke any such response themselves. With razor sharp wit, they depict a collection of grotesque figures associated with the theatre world at a restaurant.

The play interchanges between about six of these groups: from grovelling waiters, to sleazy producers and egocentric actors. At just under an hour long, the performance is short enough to ensure that the reappearances of each of these groups add to the humour, rather than making it feel forced or monotonous.

Again and again we encounter the same actress assuring her friend that he’d make a “marvellous” Macbeth, or the cockney actor moaning that he has been booted off the A-list; the circular conversations are often the most hilarious, playing on the shallowness and boredom so obviously behind the artifice.

The competence of the cast puts the audience entirely at ease: it is obvious at every instance that they know exactly what they’re doing. They carry off the stylised characterisation with assurance, with each and every movement perfectly precise as they glug champagne, cackling and squealing with delight.

Cameron Cook’s animated facial expressions were notable, either contorted into a parody of shock or looking as if something unpleasant is being held under his nose. Helena Wilson’s sycophantic goggle-eyed glare was equally funny, whilst Nick Davies was hysterical as an actor failing to grapple with iambic pentameter.

There was no weak link in the cast, each pulling off the exaggerated stereotypes they depicted, whilst managing to make each distinct and engaging. Nor indeed, a weak moment either: from the chattering at the start, to the inevitable flurry of air kisses at the characters’ departure, it felt fast paced and full of energy.

With unremarkable set, costumes and props, it’s clear that the strength of this production lies in the talent of the cast: I felt they could have been given practically any line, and somehow transformed it into a work of comic genius.

The play itself may not offer any sort of deep commentary, other than its extravagant satire, but it doesn’t matter. An immensely enjoyable evening that will cheer you up from even the darkest depths of your workload. “Dahling, they were marvellous…”