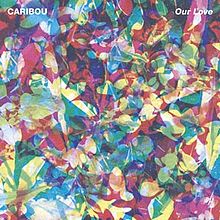 Canadian auteur Dan Snaith, who now records as Caribou, is nothing if not meticulous. His elegant, peculiar electronic creations are among the most intricately designed pieces of music in contemporary dance, precisely arranged and fine-tuned to the point of obsession. His latest album, Our Love, is something of an apotheosis: warm, intimate, and melodic. It nonetheless impresses overwhelmingly as a triumph of craftsmanship, a perfect system of pulsing bass, flickering percussion, and gleaming synths. It’s an engaging and sometimes engrossing record. Unfortunately, the album rarely manages to completely transcend its obvious constructedness. It has become a cliché to observe that Snaith took a PhD in pure mathematics at Imperial College, London, and that his music sounds exactly like what you’d expect a man with that background to produce. But Our Love genuinely does feel a little sterile in its careful, consistent detail, and by the time it finishes, you’re impatient to listen to something looser, more organic, more spontaneous.

Snaith has described the album as “mind-numbingly simple,” and on one level he’s quite correct. Though an immense amount of time and thought has obviously gone into it, the end product is unpretentious and homogeneous. It is a series of sultry, swooning, bass-heavy dance tracks that lend themselves just as well to late-night contemplation in a darkened room as to the dancefloor. While the album implies psychedelia with its broad sonic palette and trancelike atmosphere, it is less overtly pop, and less psychedelic, than most of Snaith’s previous work. Instead it offers what is effectively a sequence of torch songs (‘Silver’ especially fits that description) underscored by ’80s-sounding beats. The whole thing is as smooth as velvet, and the ten tracks can easily blur into one, for there is little stylistic variation to distinguish them. And it never gives us a true moment of catharsis – except, perhaps, at the very beginning, in the soaring and then all-too-briefly skyrocketing bliss of ‘Can’t Do Without You’. Not coincidentally, this is the album’s finest track.

What with its remarkably dense, reverb-saturated soundscapes, and its reliance on short, endlessly repeated, barely intelligible vocal snippets, Our Love occasionally seems like a more colourful, less gloomy take on a Burial record. More colourful that is, because its prevailing mood is not of alienation but of romantic rapture – albeit undercut with a disquieting current of uncertainty and fear. Our Love always feels open-hearted and occasionally even feels exultant: the aforementioned ‘Can’t Do Without You’ reaches a sincerely thrilling climax. But snatches of desperate-sounding voices tug at the undersides of many of these songs, and spooky counter-melodies snake their way into almost every upbeat tune. It’s an album about being in love, but simultaneously being beset by insecurity, feeling that you will lose everything, and fearing that all this magic and colour might fade away at any moment.

What ultimately holds the album back, however, is the fact that it never quite stops sounding calculated. Our Love is probably best heard in a state of downbeat weariness, where you can let it draw you in and you can lose yourself unthinkingly in its murky tunnels. But listen to it while you are alert, and it becomes unsatisfying. This is not a cerebral record, but it has been cerebrally composed, and for most of its length Dan Snaith fails to make it sound effortless and unselfconscious. It’s still a strong and accomplished work, but Our Love does not transcend its indie-electronic niche, and its appeal outside that sector is likely to be very limited. 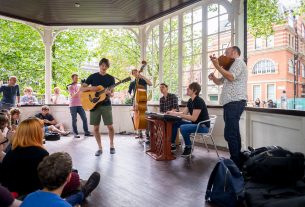