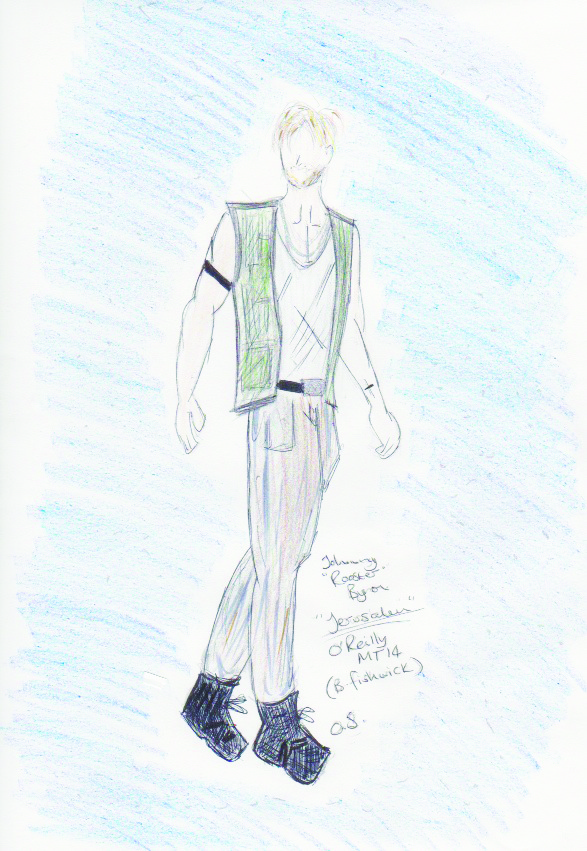 It is St George’s Day in Flintock, Wiltshire, and the modern-day pied-piper, coaxing youths into the forest with alcohol and amphetamines, is facing imminent eviction from his static mobile home. The following 24 hours escalate into delirium, violence and excursions into the recesses of personal and national identity.

The show is a carnival of sensory delights, incorporating a wide palette of elements: fireworks, strobe lighting, live animals, live music, folk songs, resulting in a series of exhilarating vignettes from the chaotic rave scene to the haunting ethereal performance of the allusive Phaedra (Clemi Collett) singing the hymn Jerusalem.

The action unfolds in Rooster’s wood, a green world in which he reigns as Dionysus, inciting the impulses of anarchy within his adolescent followers, resulting in bacchanal ritualistic chaos. The hedonistic revelry within the green world indicates a lamentation of decaying national identity, epitomised by the ‘Men in Black’ floats at the village fair, and the creeping onset of suburban development threatening to bulldoze this stomping-ground of pagan abandon.

A Puck-like figure in a drug-induced stupor, the fabulist Rooster spins out tales of meeting with Giants and being kidnapped by Nigerian traffic-wardens. Enchanted, we humour him, having temporarily suspended our belief as the boundaries between myth and reality become increasingly blurred by a drug-fuelled haze that descends on discourse and action in this stagnant realm where the philosophical ponderings of the Professor (Andrew Dickinson) further accentuate the state of confusion.

Rooster is the fallen anti-hero of this tragi-comedy in which his defiance against convention has ultimately detrimental consequences. Once an adrenaline-pumped village celebrity, Rooster is now depleted of his empire and left with straggles of teenage disciplines, whose own loyalties are even called into question.

Effacing truth, Rooster can only approach his desperate situation as a ‘storm in a tea-cup’. Rooster and his closest companion Ginger (Will Hislop) are submerged in a state of inertia; defiant of the prospect of change, with Lee (Tom Pease) as a somewhat anomalous character in his search for a break-out of his social shackles.

Rooster’s bombast becomes subdued in the heart-rendering moments with his young son Marky (Douglas Baird and Austen Phelan), but his incapacity to change restrains any reconciliation with Marky’s mother Dawn (Sammy Glover). Moments of glowing humanity in this conflicted play do not linger for long before they are under-cut by Butterworth’s biting humour or by more malevolent movements in the plot.

Jerusalem is as joyous as it is brutal, as hilarious as it is haunting. Will Felton’s last Oxford production is executed brilliantly by all cast and crew and provides a unique theatre experience in its own characteristically rule-defying way: in few other plays will you find Morris-dancing, Girls Aloud, William Blake, and a coconut.

Gone but not forgotten – a tribute to Chicago