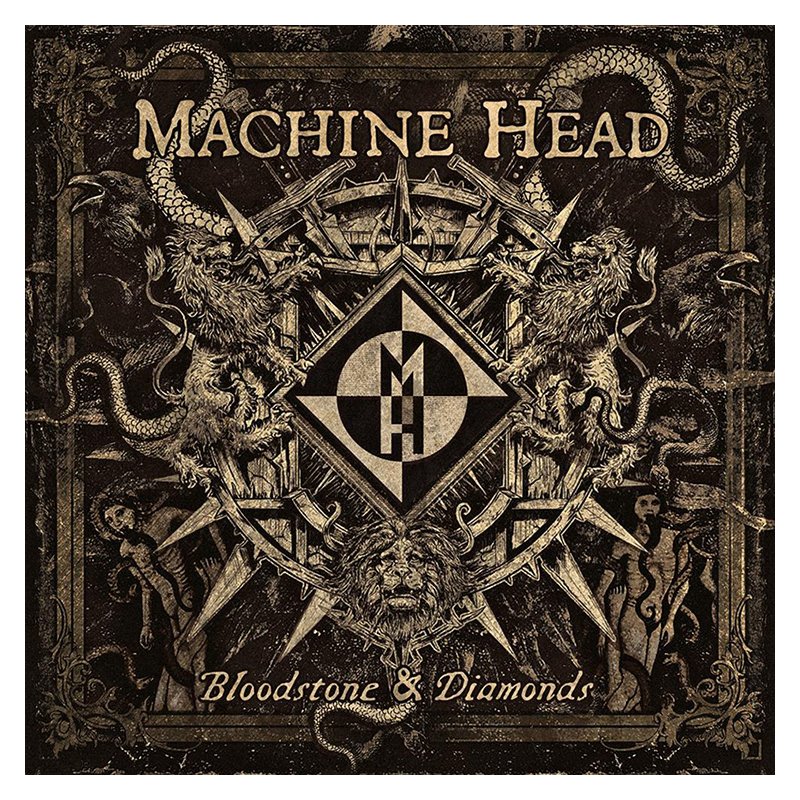 Boasting 12 songs that last over 70 minutes in total, Bloodstone & Diamonds is the Machine Head’s longest album by over 10 minutes. On a first listen, it may all be too much to take in: the melodies may start to blend into one another, the various ripping guitar solos may become indistinguishable, and the band’s trademark aggression may seem diluted. In other words, it may come across as the trash metal equivalent of a sumptuous Christmas feast: it satisfies intensely, but leaves you stretched out on a couch promising yourself never to eat anything ever again. Yet the album’s triumph is that it is not simply long for length’s sake: it is also the most varied album of their 23-year career.
The band’s influence on its own music is clear. Bloodstone & Diamonds includes everything from the string quartets and choirs present in their previous effort, Unto the Locust, to a nu-metal chorus in ‘Game Over’ that hails back to their middle period, and all the way back to an instrumental track with voice-overs such as ‘Real Eyes, Realize, Real Lies’ from their debut album, Burn My Eyes. While this could be conceived of as the band rehashing their glorious – or, as the case may be, inglorious – past, these elements are never repetitive. The female choir singing “America” in ‘In Comes the Flood’ sounds nothing like the children choir of ‘Who We Are’. The string quartet in ‘Now We Die’ features much more prominently than it ever did in ‘I Am Hell’. The nu-metal moments come across not as an attempt to cash-in on a popular genre, as they often did in the band’s middle albums, but are instead combined with the band’s layered song-writing to become yet another instrument in a symphony of aggression and dissent. The one moment where previous influence fails to be surpassed is with ‘Imaginal Cells’, which, though a nice break late in the album between more explosive songs and an interesting exploration of human capacity for innovation and evolution, lacks the punch of ‘Real Eyes, Realize, Real Lies”s socio-political cacophony.
As if all of this were not enough, Machine Head also experiments with new elements and techniques quite extensively. ‘Damage Inside’ features frontman Rob Flynn singing quietly but movingly into the emptiness, whereas Phil Demmel’s uses of a Whammy pedal in ‘Ghosts Will Haunt My Bones’ makes his guitar sound like a specter screaming in the distance. The most innovation, however, comes in ‘Sail Into the Black’ with the use of Gregorian chanting and an unusual song-structure in which the first half of the song is mostly calm and atmospheric – think the early moments of ‘Darkness Within’ – and the second half explodes into song by adding intensely, dramatically heavy moments.
The innovations also extend to the lyric aspect of the songs. ‘Night of Long Knives’, perhaps confusingly not named after the Nazi purge, is a veritable horror song based on the Manson family murders. ‘Killers & Kings’, meanwhile, uses Tarot imagery to explore the band’s core philosophy, namely that “from death comes rebirth”. Indeed, as a whole the album’s lyrics argue rather cohesively for standing up to the evils of society and fighting for something new. What at first may appear mere self-destructive nihilism is eventually revealed as self-empowering dissent in a world where, as Flynn sings in ‘In Comes the Flood’, “the market may be free, but not for you and me”.
Unfortunately, amidst all the album has to offer, some great songs fade into the background. On their own, ‘Eyes of the Dead’ and ‘Beneath the Silt’ will definitely enliven a shuffle section, but sandwiched between the monumental ‘Sail into the Black’ and the epic diatribe of ‘In Comes the Flood’ they cannot but feel relatively flat. Similarly, album closer ‘Take Me Through the Fire’ provides a call to arms with various interesting elements, such as a brief drum solo, but by comparison to some of the more successfully ambitious songs in the album it seems an odd choice to conclude the album.
Bloodstone & Diamonds may be less focused and slightly lighter than previous releases, yet it is also more varied, melodic and even frenetic. It displays a band able to borrow from their past in interesting ways but also capable of innovating and branching into new sounds. Its one flaw is offering such a sumptuous feast of riffs, solos and melodic mayhem that the listener may become desensitized to some of its dishes. For metal fans everywhere, however, this just means they can indeed have Christmas every day.