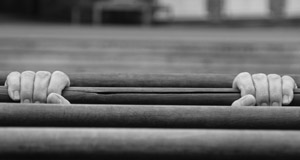 I got my first taste of Monkey Bars last Saturday, at a rehearsal in St. John’s. Director Siwan Clark discussed her own motivation for putting on a production of the award-winning show from her mother’s work with vulnerable children, as the cast acted out a selection of scenes. Seeing the whole production in the intimate setting of the Burton Taylor Studio, I’m pleased to see, shows the same verve and energy from the preview.

Based on interviews conducted by Counsellor Karl James, Monkey Bars takes the words of 7 to 14-year old children and gives them to adults in adult environments. The result is an oddly disconcerting work, which can move from a perfectly mature discussion to a childish squabble within sentences.

The setting certainly plays to the production’s advantage. Bar a microphone, the stage is made up of black blocks, on which the actors draw out the props with chalk. Chairs become tables; tables become podiums. Between the scenes, the actors stalk about, their business drab as expressionless as their faces as an oppressive beat plays in the background.

It feels unfair to single out any one actor because of the great standard, but also due to the strong connection between them. Rosalind Brody’s air of sugared haughtiness, all head rolls and high laughs, plays off against the intensity of Charlotte Fraser as she discusses politics, patriotism, and supporting the Queen.

Freddie Popplewell and Ben Goldstein play perfect ‘old-before-their-time’ students, griping about the behaviour of girls in their generation, worrying about the Scylla and Charybdis of venturing outside and being mugged, or staying indoors and suffering from Ricketts.

Calam Lynch takes on the role of attention-seeker and show-off in a scene at a dinner table, blurting out about a bike accident in a vain attempt to gain street cred. Connie Treves offers a particularly notable performance as Grace, the girl who gives the name to the play from when she fell off the monkey bars and broke her arm. Her monologues are direct and blunt, and the message which comes out is a feeling of never being heard.

Perhaps most strikingly different from the preview is the audience’s opinion, and the variety therein. Though a number of lines draw in guffaws from the whole theatre, there are just as many moments where many audience members see the children’s words as rather more serious. It certainly feels as if we are participating in the play, and discerning just what the words mean to us. Topics ranging from religion to domestic violence appear between the more comic sequences, the children’s curiosity seemingly oblivious of taboos.

These moments are the tenderest and perhaps the strongest parts of the play, their brilliance foregrounded by the humour which pervades much of the rest of the production. The speed of the scenes – and the fluidity of character, with the role of Karl James shared between the actors – keeps away the danger of it all becoming saccharine.

The only part of the production which feels out of place is the end, which (though I won’t spoil it) doesn’t seem to fit in as well with the clever and well-executed premise. Nevertheless, Monkey Bars is a fascinating, funny, provoking work, and one well worth watching. Following scandal after scandal involving mistreatment of children, it is satisfying to see that they are given a voice.

Another Country’s Good: Playhouse to boarding-house

Making Miracles From the Mundane: Why Claymation Still Works