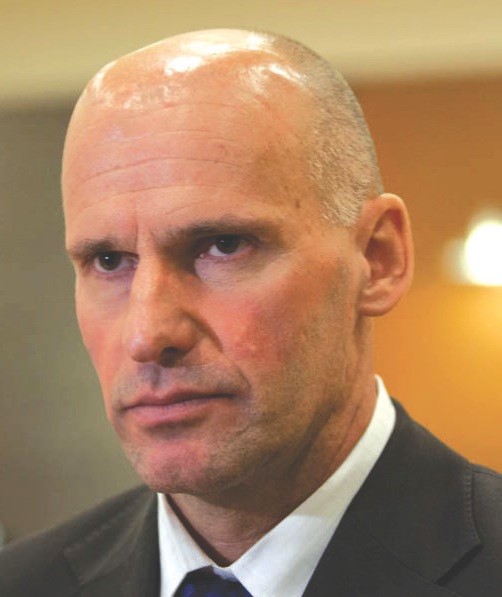 It seems like an ethical thought experiment, an exercise for a philosophy class – someone who has committed an atrocity of unimaginable cruelty, a despicable murderer, stands in the dock, and has requested you to defend him in court. But, in the early hours of the morning, a matter of hours after Anders Breivik had committed one of the worst massacres in European peacetime history, Geir Lippestad’s phone rang. The man who had just left Norway reeling from the impact of 77 murders, including 69 children, wanted Lippestad as his defence attorney.

In the recordings of press conferences from the time, Lippestad is stony-faced, prickly, unsurprisingly tired-looking. His sharp Scandinavian features seemed hard enough to bounce off questions from even the most prying reporters, so I was ready for the same clipped tetchiness. In person, though, he was disarmingly charming, swapping the gruff ‘no comment’ responses for an almost lyrical Norwegian lilt as he leaned back in his chair, turning over each question I asked him in his mind, examining them like pages of case notes.

“Defending Breivik, I had to put myself, my feelings to one side”

He’s already picked up the English penchant for self-deprecating humour: “I hope you can understand a word I’m saying, with my English!” But perhaps it’s not surprising that there are two Geir Lippestads – as he explains, there has to be: “Defending Breivik, I had to put myself, my feelings to one side. It’s all about being professional.”

The division between Geir the man, the father of eight children, the left-wing humanist, and Geir the cog in the justice system stems from some of his most deeply held values. “My father went bankrupt when I was about 15 years old. The house, our family, everything that was secure was thrown away. Then I met a man, a nice, intelligent man – a lawyer. He talked to me about the value of the rule of law, human dignity, human rights, and I remember listening to him and him telling me: ‘Geir, the value of the rule of law is security; you can’t find a society without it that is secure.’ And for me, who had experienced massive insecurity, it was something I thought about. Law is security.”

It was a philosophy that would serve him well in his debut high-profile case in 2001, defending neo-Nazis who had murdered a 15-year-old boy: “It was difficult, but I had the same idea that, well, they’d done something terrible, but they were human beings, they have human rights, the rule of law must exist. We can’t shoot them, we must treat them as human beings. And I did my very best. The case lasted almost three years. It was a difficult three years, but I worked as hard as I could for these guys.”

It was this experience that brought him the renown that would attract Breivik, and stood him in good stead for the case: “I learnt a lot in that case, a lot about communication. Because when people are angry, they don’t understand why you said ‘yes’ to defending these horrible people. When people are angry at you they don’t listen, and you don’t get any respect.”

This is an understatement – 40,000 people were on the streets of Oslo within days, protesting the way in which the trial was being conducted. As we move on to talking about the trial itself, Lippestad seems to tense up, flashes of his curt professional self showing as he repeats what seems like a mantra: “I believe in the values of the rule of law, and the values of human dignity and human rights. Everyone, even Breivik, has the right to a good defence. It’s one of the most important values in a democracy.”

“We have to think about the core values in a society: rule of law, human dignity, and human rights”

I try to delve into how he as a person felt about the trial, and he bristles: “I have two daughters who are disabled, I have defended two people, right-wing extremists, who have said ‘if I were the ruler, I would kill all disabled people, because disabled people are not real people’. Of course, I could get hurt from that, but instead I think: I don’t agree with you, but I will still defend you. Because that’s my task. That’s my role, and I think that’s very important for society”.

It was particularly difficult because of the exact nature of the case – almost uniquely, the defence were arguing that Breivik was compos mentis, and thus that his act was one of political extremism, not insanity. Lippestad explains: “Breivik said to me: ‘I don’t want to be criminally insane, because I’ve got lots of letters from all over Europe telling me that if I’m criminally insane, my action is worth nothing to right-wing extremists. But if I am sane, and go to prison, I will be looked upon as a hero.’ So he wanted to be sane and go to prison.”

And so, the trial hinged not on ‘guilty’ or ‘not guilty’, but on the line between evil and insanity. Working closely with Breivik on this basis would push Lippestad to almost to breaking point: “You have to be professional and keep a distance, but you have to do your work. You have to know him, learn him, because finding out about his childhood was important for the case. So I asked him: ‘What was your childhood like?’ He talked about that, and then he asks me: ‘What was your childhood like?’.”

He lowers his voice, leaning towards me: “You talk to the client as close as we are now – having seen so much cruelty, the pictures, the funerals on television. And he jokes, he smiles, he thinks it’s okay.”

He pauses, and leans back again. “But of course, I won’t ask myself:  ‘Do I like this person?’ If I ask myself that, then I can’t be a lawyer. I have to think: ‘This person has done something terrible.’ Of course Breivik had done something terrible. But, again, we have to think about the core values in a society: rule of law, human dignity, and human rights. I believe in these values, so I’ll do my very best to defend him. And if you think about that all the time, these values, and your part in these values, it’s easier to disconnect from all the antipathy.”