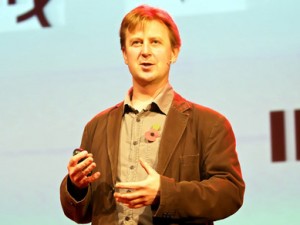 “You should never call yourself a philosopher.” Coming from the co-founder of The Philosopher’s Magazine, such an opening is surprising, to say the least. Instead, Julian Baggini, who has gone on to author numerous books aimed at a wide audience on topics as varied as personal-identity, ethics, and atheism, prefers to describe himself as simply “a writer.”

Yet despite his viewing the term “philosopher” as too evaluative, leaving it as something “for other people to judge,” there is no denying that philosophy forms the primary concern of Baggini’s writing.

Given this focus on challenging the unexamined assumptions that shape our understanding of the world, one may be surprised at his claim that “philosophy by itself isn’t necessary of much use outside of philosophy.” Yet this is more than a throwaway comment from a self-deprecating academic. Baggini underlines throughout our conversation the importance of feeding philosophy into other areas, in order to truly reap its benefit. “It contributes that theoretical clarification and habit of rigorous interrogation of ideas to make sure they stand up, but it has to then blend with other things […] to be of real use.” This “blending” can be seen, on an everyday level, in the way political philosophy combines with more concrete knowledge of human nature to shape our understanding of the political sphere, yet more surprisingly, perhaps, it is applied to eating in Baggini’s most recent book, The Virtues of the Table.

Philosophy by itself isn’t of much use outside of philosophy

Here, our conventional assumptions about food and eating, ranging from the benefits of Organic, Fairtrade and PDO status, to the loaded debate about vegetarianism, are re-evaluated, often leading to unexpected conclusions. Throughout this process the question of “how we ought to eat” is shown to lead to a broader, more inclusive answer to the more fundamental question of “how we ought to live,” in a connexion which reveals itself to be less tenuous than it may initially appear. It relates, Baggini argues, to the concern common to both philosophy and eating with our humanity, as “to live as a proper human being we can’t, ignore our physicality and pretend we’re just intellectual.”

Brushing aside what he considers to be the equally absurd assumption that we “Ain’t nothing but mammals,” (“In saying that the guy is proving he’s wrong, because animals do not use rhyming language in order to communicate”) Baggini outlines the importance of a way of living in which “we accept our physicality without descending to the level of an animal.” If this suggestion seems unnecessarily high-minded too apply to a process that ultimately serves to keep us alive, it is perhaps more convincingly articulated simply as “adopting an attitude to our eating which is appreciative.” Being aware that with food nothing is permanent, and accepting this in a way that doesn’t result simply in “a desperate scrambling to keep hold of a moment” is one way he proposes this can be done.

If philosophy can now be seen to permeate even into what Baggini puts on his plate each morning, his first encounter with it gave little hint of what was to come. “I grew up in England in the 1980’s- philosophy didn’t exist to us then.” After taking three A-levels with a “philosophical dimension to them” he went on to study the subject at university, yet was distinctly underprepared for what followed: “I didn’t really know what I was applying for, like most people, I turned up to do philosophy and was shocked to discover logic.” He soon, however, found himself hooked, remembering how, on finishing his undergraduate degree, he felt as if he’d “only just started going.” A Phd, in which he focuses on issues surrounding personal identity, followed, proceeded by the co-founding of The Philosophers Magazine, a quarterly publication that aims to present in-depth philosophical discussion approachable for a wider audience .

According to their website, Baggini is a “distinguished supporter” of British Humanist association, but he is tentative in describing his connexion to the body, viewing himself more as “kind of an awkward friend,” citing his discomfort with “everything that seems to come out of organised humanism” as the reason behind this, most notably the focus on defining themselves too greatly in opposition to religion. Indeed, since his Very Short Introduction to the topic in 2003, the atheist landscape has changed noticeably. With the arrival of the collectively termed “Four Horsemen of Atheism”- Dawkins, Hitchens, Harris and Dennett, has come a shift in the “public rhetoric” of those who reject belief in God, and it is these attention-grabbing titles and provocative interviews which Baggini takes issue with. Questioning the value of atheists reading these books simply looking for “confirmation” of what they already believe, his reminder that “you don’t automatically become more intelligent or a better critical thinker by giving up belief in God” could serve as a useful one for those who take a more militant view against theism, which, he suggests, non-believers can still learn something from.

Unlike those with religious belief, however, he does not consider belief in a higher being to be necessary for moral values. “It’s so evidently the case that people do have moral values without God, and certainly people find life meaningful and purposeful without God too, yet so many people can’t get their head around that.” He does, nonetheless, seem concerned that taking this approach to the other extreme is unproductive, citing discomfort with the way that “people become so keen to counter the idea that without God everything’s miserable, that they just give the upbeat message too much.”

This desire to balance optimism and realism frames the approach of his forthcoming book on freewill, where he is eager to reformulate the problem in terms of a freewill “worth having.” Paraphrasing Morecambe and Wise in a classic example of his merging of the philosophical with the quotidian, he argues that this well-trodden area of philosophy is one in which “all of the things that need to have been said have been said, but I don’t think they’ve been said in the right order.”  In this, like any of the subjects he addresses, “it’s a question of putting it all together in a way that makes sense to people and really gets to the core of why it matters to us.”

In the light of this approach, his earlier claim that “people say there can be philosophy of anything, to which I always think: Yes, but what would be the point?” begins to make more sense. The value of philosophy for Baggini, then, is neither as an abstract discipline confined to it’s stereotypically stuffy libraries, nor something we “stitch on” to everyday subjects for added profundity, but in the right contexts, can force a new perspective  on  the everyday.