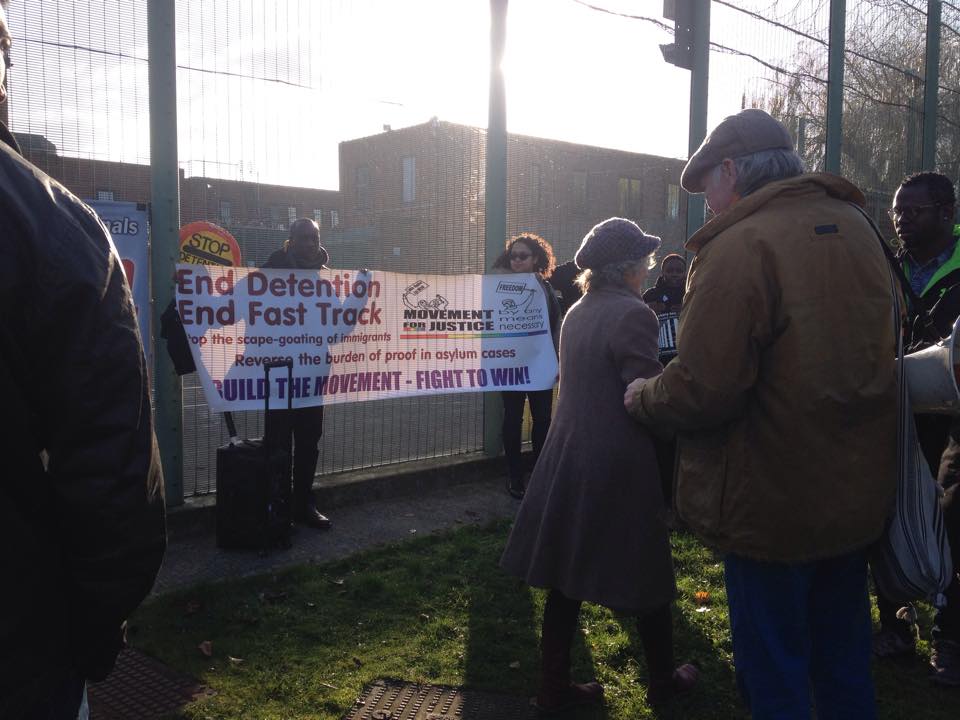 Numerous Oxford students participated in a demonstration outside Campsfield House immigrant detention centre this afternoon, protesting an alleged assault against a detainee by security staff.

Around 30 protesters chanted “detention centres, shut them down” and “money for jobs and education, not for racist deportation” outside the centre in Kidlington. The demonstration attracted a small police presence, with around five Thames Valley Police officers observing events.

The demonstration was organised following an incident on Saturday evening inside the centre, in which a detainee was allegedly restrained and assaulted by Mitie security staff.

Whilst admitting they have “found it difficult to get a reliable account of what took place”, Kate Smart, a spokesperson for Asylum Welcome, claimed that “a detainee was pinned to the ground by a group of 4 or 5 members of staff at around 5 or 5.30 on Saturday. Accounts vary as to whether he was only restrained or whether he was physically assaulted”. Writing on Wednesday, Smart went on to report that “the alleged victim is in solitary confinement”. Asylum Welcome, a group campaigning for the rights of asylum seekers in Oxfordshire, was able to confirm on Tuesday morning that the detainee was not seriously injured.

The incident prompted a protest of around 60 to 100 detainees in the courtyard of Campsfield House a few hours later, a video of which has circulated online. In the video, detainees can be heard chanting “England, hear our voice.”

During today’s demonstration, a Campsfield House employee emerged from the premises and told protesters that they were trespassing on private property and had to leave. However, after a discussion between the guard and a police officer, the protest was allowed to continue.

Comparing the demonstration at Campsfield House with the recent protest over the killing of 18-year-old Michael Brown in Ferguson, US, third-year student Allen commented: “Hundreds of students attended what was an incredibly moving protest in solidarity with Ferguson, but I imagine most don’t even know what is going on just six miles outside of Oxford”. Allen described the aims of the Campsfield House protest as raising awareness of the “systematic degrading treatment of asylum seekers carried out as part of government immigration policy”, with the ultimate objective of shutting down detention centres.

The protest was supported by the Close Campsfield Campaign. Spokesman Brian MacKeith stated: “We want to show our solidarity with detainees in Campsfield, and show the authorities that we want Campsfield to be closed along with all the other detention centres.”

Alleged human rights abuses at Campsfield House, which was established in 1993, have provoked numerous student protests. Earlier this term, 61 senior Oxford academics signed an open letter to the Prime Minister urging for the closure of the centre. Last year, student group Oxford Migrant Society arranged a demonstration to mark its 20th anniversary, and in 2010 a detainee’s hunger strike reached national headlines.