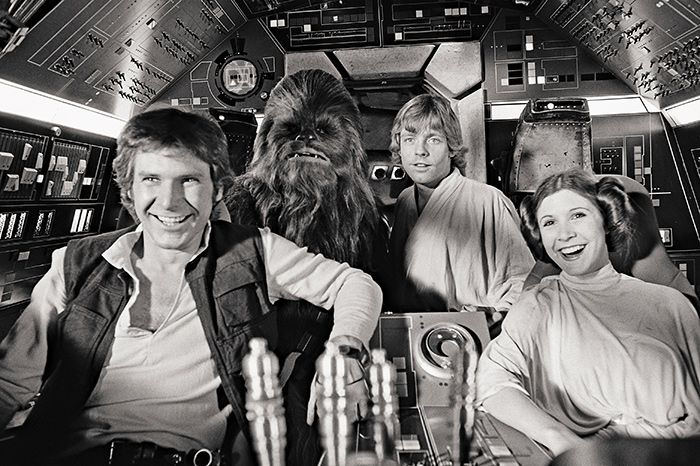 Anticipation has the power to kill movies. Overly hyping that blockbuster that won’t hit our screens for months and months creates such a bubble of excitement that even the smallest of flaws in the film itself bursts it. Case in point, Star Wars I, II & III. The original trilogy left such a cultural imprint that it became, and continues to be, the blueprint for action sci-fi. The flip side to this coin was that it strangely became a poison chalice for the makers of the noughties trilogy, as, let’s be honest, it was going to be incredibly difficult to emulate, let alone top, what went before. So, the next trilogy is surely in a better position? Arguably less hype, bigger budget and better technology? All of this is true, yet what is also clear is that the newest batch of Star Wars films are going to released in a much more crowded cinematic universe.

So, let’s form a defence in aid of this new Star Wars reboot. What does it have in its favour? Well the obvious draw is that the big three are back; Harrison Ford returns as Han Solo, Carrie Fisher is back as Leia and Mark Hammil (who?) is back as Luke Skywalker. This is JJ Abrams getting the band back together for one last sell out tour, with C3PO on bass and R2D2 on the drums. Abrams himself is a massive draw as well. He’s already mastered one reboot – the Star Trek franchise – and that was excellent.

If you haven’t seen them already, or feel like watching anything Star Trek obliges you to be socially awkward and go to sci-fi conventions dressed as a Space Lobster, then just leave those prejudices at the door and do so.

The first of the reboots in particular is genius and actually carries the same cavalier spirit of the original Star Wars films. The rest of the cast is largely unknown in Hollywood circles but has an excellent back catalogue. In particular look out for John Boyega, a young English actor who starred in the brilliant Attack the Block and is touted for a key role in the film. So; cast good, director excellent, nothing can go wrong.

Wrong. Despite all the positives this is by no means a risk free franchise for Disney. So many big questions still persist; what will the tone be like, will the big baddie carry the same gravitas as Darth Vader, why haven’t they confirmed the absence of Jar Jar Binks? (Seriously, three films for that cretin?) The tone is a huge issue, as the original trilogy had the gunslinging feel of a western in space, with Vader acting as the unrelenting Sheriff; even if he does look like a big black dildo (credit goes to Frankie Boyle for that joke). However the noughties trilogy was much more serious in general.

Revenge of the Sith as a standalone film is pretty epic, it’s got emotional range, superbly imagined and shot set pieces as well as the gut-wrenching final scenes between Obi Wan and Anakin.

However, the problem was that for many people it didn’t feel like Star Wars. Indeed, a lot of people think that the recent ‘Guardians of the Galaxy’ acted as more of a spiritual extension of the Star Wars Universe.

Star Wars has also now entered a cinematic world where sci-fi is the norm. Unlike the late 70s and 80s, where it was real ground-breaking stuff, now it is playing catch up. Superhero movies are the norm and the frontiers of space seem much closer than they once did. Moreover television and film has expanded its emotional boundaries. I see the awkwardness of Leia kissing her own brother by mistake but I raise you Cersei Lannister consistently sleeping with hers in Game of Thrones. We’ve all seen spaceships fall out of the sky on our screens, seen huge flowing set pieces set amidst the destruction of some planet that is impossible to pronounce unless you’ve had a few Jägerbombs. The point is that Star Wars will have to go a long way to re-capture its place as a pioneering franchise which pushes cinematic boundaries.

Can it still do that? Yes, it can, but it’s going to be an uphill struggle. Reboots in the past have failed because they either stray too far from the original tonally or they try too hard to emulate it. In many ways it’s the hardest thing to do in film, as audiences create such a link with the original characters in the first place.

A good example is the reboot of The Italian Job with Mark Wahlberg, or indeed any movie that remakes a Michael Caine film, there’s always a nagging feeling that it isn’t quite the same.

Moreover, Disney has taken three of the most recognisable and iconic characters in film ever and hopes to re-kindle the formula that made it such a seminal trilogy in the first place. When reboots work it can be brilliant, look at the recent re-emergence of the ‘Planet of the Apes’ as a franchise. Here’s a reboot that emulates the original and washes away the bad reputation that later Apes films gathered, including the 2001 reboot with Mark Wahlberg – I promise this isn’t a hatchet job, I actually think he’s a good actor, if a terrible rapper. However the Apes franchise is a rare example of a film that manoeuvres this tightrope effectively. Whether Star Wars can do this as well remains to be seen.

Put simply cinema needs a good Star Wars trilogy. At its best it can be a touchstone for sci-fi; at its worst it can be incredibly disappointing. Indeed, there’s a poetic irony to the title of the new film, ‘The Force Awakens’, as this could very well be the re-awakening of a cinematic giant.