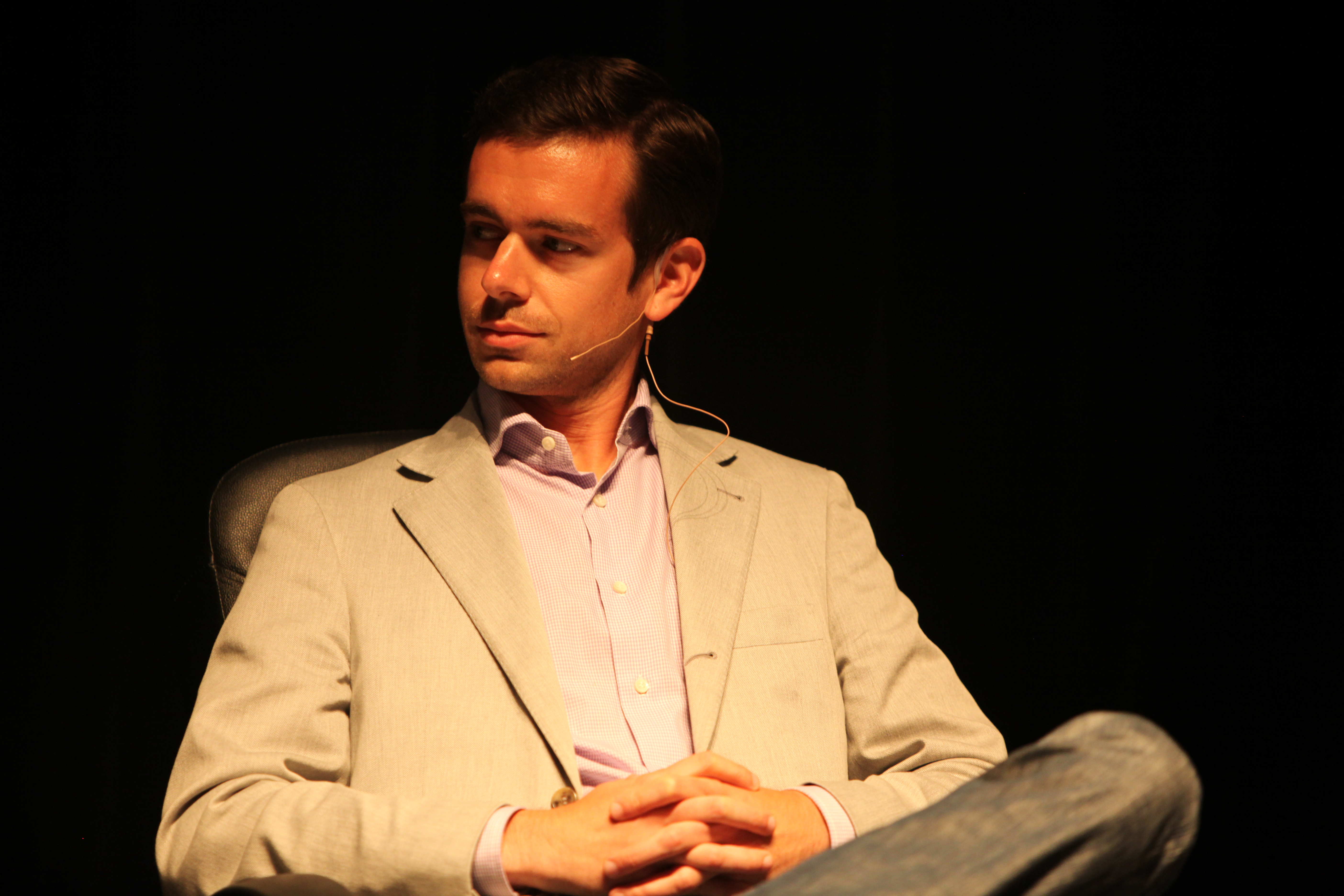 Jack Dorsey doesn’t speak unless he has something important to say. This advice rings loudly in my ears as I apprehensively climb the Union staircase to meet the technology entrepreneur dubbed the “two-hit wonder”. For a man who turned 38 this week, Jack Dorsey already boasts – although I get the feeling boasting is not something that interests him – a breathtakingly impressive resume. Best known for co-founding Twitter and winning the Wall Street Journal’s prestigious Innovator of the Year award for technology, last night at the ‘Financial Times The 125’ flagship event he announced plans to take his second company, Square, global.

Dressed in head-to-toe black – a sartorial manifestation of his preoccupation with streamlining and simplifying – with impeccably styled hair and a tattoo of an elongated ‘S’ peeking out from beneath his shirt cuff, the recent recruit to the tech billionaires club appears collected and unimposing.

Speaking with a soft American accent, in hushed tones that lack the usual rises and falls of more eccentric characters, the Missouri-born entrepreneur offered an unexpectedly relaxed handshake. As someone who once displayed a nose piercing, experimented with bright blue dreadlocks and attended punk concerts, his youthful edge has matured into an aura of unassuming coolness.

Surprisingly, his composition and demeanour are unchanged from his earlier address of the Union, where members were made to check-in bags and laptops before entering. There is no façade: the Jack Dorsey one meets in private is the same Jack Dorsey one encounters in the public forum. It is undeniable that, for one of Forbes’ youngest billionaires, the certified masseur – who once studied botanical illustration and fashion design – is down-to-earth. He speaks of a modest, Catholic upbringing, the “Catholic guilt” he feels at dropping out of NYU a semester before graduating (he wanted to “build more” rather than “learn more”) despite being the first in his family to attempt to go to college, and his mother’s tendency to remind him every week that he could still go back to school.

Notably, he is motivated by a desire to influence the worlds of others, drawing analogies between his current work in computer science and the work of those in public office. Having once declared his ambition to run for Mayor of New York City, he has now reconsidered his stance. “Rules and laws in computer programs show results in seconds; in public office, the results of rules and laws take years.”

Throughout our encounter, he refers repeatedly to an innate desire to “level the playing field”. With Square, the focus is commerce; with Twitter it was communication. Earlier, he informed those present at the Union Chamber that his mother originally thought Twitter was a private mode of contacting him, not realising her messages were public. Inspired by a lifelong interest in whether it was possible for an individual to report what they’re doing and where they’re going, Twitter was designed for SMS so that anyone, anywhere in possession of a cell phone could “have a conversation with the entire world”.

Glimmers of dry humour pierce through his distinctly composed temperament when I ask which project he is proudest of: Twitter or Square? A low laugh escapes, and he compares my question to asking a parent “which one of your twin girls are you proudest of?”

“They’re both doing really, really fundamental things, and I’m extremely proud of both,” he begins diplomatically, referring to his belief that commerce and communication are two of the most basic building blocks of civilisation. Modestly, he refuses to take absolute credit: “I’m just proud of the group of people we’ve been able to collect to do this.”

As the author of the world’s first tweet (“just setting up my twttr”) and the man who, by his own admission, created “the closest thing we have to a global consciousness”, I’m keen to ask him whether he wishes he could be selective about who uses Twitter. Does he ever feel that Twitter has gifted people with a platform to express their views, but perhaps not everyone – and Twitter trolls or figures who incite racial hatred spring to mind – deserves such a platform?

He pauses for a second, maintaining unwavering eye contact with watery blue eyes. “No. I think everyone deserves to have a voice, and Twitter is just an amplification and an extension of that voice,” he comments carefully, leading me to suspect this response is pre-rehearsed. “Certainly there are certain behaviours I’d love to see diminished, but those are behaviours that are not unique to Twitter. They’re everywhere in the world … Twitter has an ability to make that felt faster and have more people see it, but it doesn’t mean that if Twitter wasn’t there it wouldn’t happen.” One wonders, however, whether Twitter provides a new forum, and a new opportunity, for malice where there was none before.

The parallels with Christ Church’s decision to cancel the Oxford Students For Life debate on whether ‘abortion culture’ harms Britain are clear to see. Although Dorsey was previously unaware of the incident, I probe whether he feels that free speech has been compromised, or whether this is merely an instance of a failure to provide a platform.

“Fundamentally I believe that a free flow of information is a positive for the world. The more we can see the conversations, and the more we can see participation, the more we have the potential to learn from it, and the world is better for it. I would rather not shut down conversations – I’d let them flourish, because they’ll end in the state that they need to.” Although optimistic, there may be some truth to his claim. However, I cannot help but feel it ignores the possibility that these conversations may be harmful in and of themselves.

Our meeting occurs at a pivotal time. His latest venture, Square, a mobile payments company which he co-founded in 2009 following a conversation with an acquaintance who had lost a sale worth $2,500 due to his inability to accept the buyer’s credit card, has just gone global, and is capable of supporting over 130 currencies. I ask him about his decision to take the start-up company international – why the expansion, and why now?

“We’re finally in a position where the software is equally as powerful as what we did with the hardware, in the sense that it provides a lot of insight and understanding back to the merchant … We’ve decided that we’re going to make this available to everyone, and we’re going to learn even faster.”

In keeping with Dorsey’s attempt to “democratise” commercial transactions by ensuring small businesses do not lose out on large sales, Square is giving the software away for free, earning revenue instead from a 2.75 per cent transaction fee. I am struck by the altruistic aspect to the project: in Dorsey’s words, he is seeking to “level the playing field”. Alongside providing the gratuitous service, the company launched Square Capital – which has provided over $75 million in advance capital to sellers since its launch 6 months ago – and has plans to focus heavily on merchant education.

“I think we have the potential to really be there for every type of seller all over the world, and we want to build a tool that can impact the lives of everyone on the planet,” he states, speaking with inimitable sincerity. Previously, Dorsey has admitted his need to believe whole-heartedly in the social value of a product, and its ability to streamline daily life, in order to devote his time and energy into building it.

“We think there’s a huge opportunity to add value to every single transaction and every single moment of commerce. But right now we’re focused on the product as a tool to build and grow your business and get our sellers new sales, and also it’s just a very easy and fluid way to exchange money between two people.”

The story is reminiscent of the development of Twitter: progression comes first, profit second. In the tradition of Amazon and Google, Square is currently foregoing profit in order to invest its revenue in the growth of the company. They are, Dorsey agrees, playing the long game.

I ask how, ultimately, he plans to reconcile his altruistic aim of “democratising” commercial transactions with the aim of any successful businessman: profitability.

“I don’t think those two things are necessarily at odds. I think you can build tools that democratise or level the playing field and still build a very, very interesting and healthy business. We’re not leading the company purely by the business. The business supports the idea, supports the tools, supports the movement we’re building, and that money provides the option to continue growing and to continue to pay ourselves so we can continue to work on this product and service that we love.”

Discussing his business model for Square, Dorsey stresses the importance of ensuring the company is as diverse as its customers to guarantee they are building the right product for them. Over 60 per cent of Square’s sellers are woman-owned and led businesses – a figure which correlates with the high proportion of senior female figures within the company. (The CFO, the head of business, and the head of engineering are all posts held by women.) We discuss the gender imbalance in STEM industries – females make up just 13 per cent of the STEM workforce – and I question whether he feels other companies have a responsibility to make urgent changes in order to ensure women are adequately represented.

“I believe the world needs to see more diversity in its leadership, not just companies. So I think the more we can show that and the more we can encourage it by actually doing it, hopefully inspires others to do the same.”