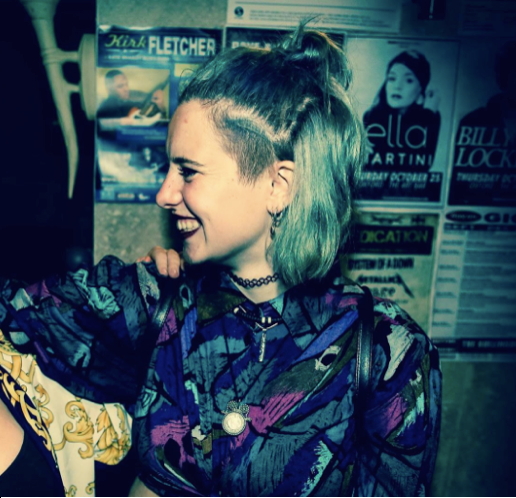 As I write I am sitting in the hairdressers’ for the second time in a month, desperately trying to get the stubborn green out of my hair, listening to the gossip from my tiny provincial village. My hairdressing salon is called BJs, by the way. They have no idea how funny the name is.

I decided to hold my middle finger up to natural hair during the summer, this being the summer before I started university. The reaction I received was not what I expected, especially at Oxford, supposedly known for its tolerance of all things weird and wonderful. I wasn’t too bothered about rocking up to freshers week with my ridiculously cut blue hair. I actually loved my azure lid, but the reactions of many people in Oxford shocked me enormously. The number of times that people said things like ‘oh my god, you have blue hair!’ seemed absurd to me. How did they expect me to react: ‘Holy fuck, I didn’t realise!’? The only responses that my Cherwell blind-date could come up with to the questions were green or blue related – is the colour of my hair really the only thing about me that is worthy of note? I soon became labelled ‘blue hair girl’, which I didn’t care about, but it was the presumptions people made about me that I found frustrating.

Perhaps I live in an airy-fairy world where people don’t play along to ridiculous stereotypes, but I wasn’t aware that blue hair automatically made me gay in many people’s eyes. I’ve seen ‘Blue is the Warmest Colour’, but does one example of a blue haired lesbian mean that all people with blue hair are lesbians and all lesbians have blue hair? This labelling is yet another example of taking an unusual appearance trait and twisting it so that it becomes a stereotype.

This happened despite Oxford labelling itself as ‘liberal’ and ‘progressive’.  How can this be true when it is presumed that one must be homosexual to have brightly coloured hair? Sexuality has nothing to do with appearance, it relates to each individual’s innate attraction to whichever gender, and the sheer ignorance of some people that it is possible to define sexuality through appearance is deeply troubling. The typical response to my constant moaning about no one wanting to snog me (I am a tragic human being) was “yeah, but everyone probably thinks you’re gay because you have blue hair”. I would like to take this moment to state that having blue hair does not necessarily make someone homosexual. All people of all sexualities look different and we cannot state that any appearance traits relate to any sexuality.

The process of attaining my sapphire locks was something of an ordeal. After nineteen years of long dirty-blonde hair, a friend hacked off my golden locks with the kitchen scissors. This was the beginning of my quest for rainbow hair. After a highly amusing trip to Sally’s (which I strongly recommend to everyone, it’s a magical place), we returned home with gin and peroxide. Our one bottle of peroxide, however, only covered a few strands of my hair, so I made my dear sweet angelic friend run back to Sally’s to buy more bleach whilst I danced to Mis-Teeq, topless, with a bin-bag around my shoulders. Three trips and eight bottles later, my hair was bleached and I looked like everyone’s favourite fashion icon: Mozart.

Despite looking super cool and sexy in my resemblance to the 18th Century genius, I thought I would spruce things up a little, so whacked on some ‘Crazy Colour Candyfloss’ dye. Regardless of my delusion at the time that it really was pink, it 100 percent was not – it was a tangerine mess. My hair stayed like this for a couple of weeks until one day I accepted a request to be a hair model at Saco. The hairdresser looked and dressed like a tragic 60-year-old lovechild of Russell Brand and Pete Doherty, and he clearly thought he was giving me a ‘mad trendy lid’. He did not. I looked like the love child of a toucan and Rod Steward. My friends later identified – to their great amusement – that it resembled an attempt to rock an edgy version of the much-celebrated ‘let me speak to your manager’ haircut. The obvious solution? Re-dye my hair another exciting colour! If at first you don’t succeed…  So, I combined lilac and candyfloss dyes, but rather than achieving the pinky-purple of my dreams, my hair turned electric blue. In time, this toned down to a lighter blue, then turquoise, and then eventually, green. This ‘semi-permanent’ dye that supposedly lasts for up to two weeks ended up lasting for over two months. You have been warned.

Despite the quite literal headache of the whole process, I loved my blue hair. I felt like a mermaid, or a My Little Pony, or a Powerpuff Girl, basically all the good things. But, alas, all good things must come to an end, and my locks were soon snot green. The snot colour wouldn’t budge though, so I went to the hairdressers, where they tried to get the green out for six hours, but I still had a swampy tinge. Today, as I sit in my throne at BJs, all I can hope is that the green will eventually come out of my hair, and that I won’t be left looking like a minty Medusa for another two years.