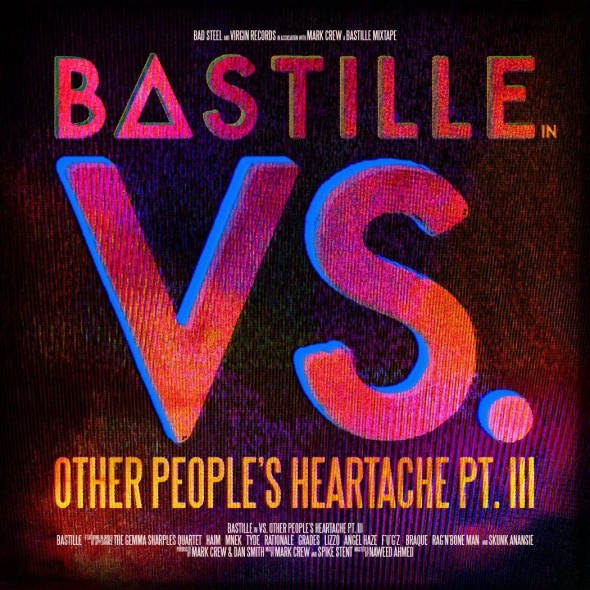 Bastille are back in force, with their newest mixtape, VS. (Other People’s Heartache, Pt. III). Containing nine new tracks, it is their latest indie rock offering, which sounds like it has been created via a synth machine circa 1983, the Park End cheese floor, searing underground rap and Classic FM. Sounding eclectic? It is. To be honest, I’d be disappointed if frontman Dan Smith and the band came up with anything different.

Unusually for a mainstream band, VS. is an album predominantly containing collaborations – boasting tracks with big names like Haim, Skunk Anansie and Angel Haze. On first glance, the mixtape looks to be extensive exploration into different sounds and expression for Bastille. Bastille are partly answering the question which is on everyone’s lips: how can you create a follow up album to the giant that is Bad Blood?

There are some real anthems brewing. Torn Apart (vs. GRADES) is a hedonistic dance track which makes you taste the smoke machine in its synth. It’s a song that is guaranteed to go down well at gigs, with a clear drop before the chorus which makes your heart lurch in your chest.  The only track solely featuring Bastille on the album, The Driver, could be interpreted as a dark and brash take on everyone’s favourite Shakespeare hit – Romeo and Juliet. It is refreshing that Bastille are still experimenting with telling well known stories in their own song writing fashion – for example Pompeii, Icarus, and Daniel in the Den. They challenge your perspective and make you think about the story in a new light. This is what makes Bastille so appealing and what works so well for them – they challenge the listener to think about perspective. It’s a relief to see they’re continuing to experiment with the art of storytelling on this mixtape.

However, some of the tracks will be too different, too unlike Bad Blood, for some listeners. Weapon (vs. Angel Haze vs. F*U*G*Z vs. Braque) is a brutish car crash of rap from Angel Haze and the emotional lyricism of Dan Smith. I’m not convinced their experimentation always works, no matter how many familiar Bastille beats are laid underneath. What we like about Bastille seems to be lost in the mix sometimes. Tracks like Bite Down (vs. Haim) are potentially a winning combination; however, they seem to go out with a fizzle rather than a bang. You’re left a little bit disappointed that this is all Bastille and Haim could make in a collaboration attempt. Although the song starts out with a strong riff, the track as a whole gets lost in amongst the rest of the album. It is simply too soft sonically and lacks the depth lyrically of the rest of the mixtape.  Of course, it has the catchy chorus of a stereotypical Bastille song, which proves that all was not lost.

VS. (Other People’s Heartache, Pt. III ), is a promising collection of music. At least one of the tracks will probably weasel its way onto your New Year’s playlist. It is clear that this is, at heart, an album of experimentation. Bastille seems to be testing the water, finding new sounds, styles and modes of expression. Of course, there are some things that aren’t quite there yet. This album will pique the interest of current fans of the band, especially those who are interested in the creative process. However, it will leave the casual listener slightly dissatisfied with the lack of polish and catchiness which has become a hallmark of Bastille. Overall, it is a fascinating look into a side of Bastille which might not make it onto the next album. Bastille are proving that they are not simply a one album wonder. This mixtape is a promise of greater things to come from the band.