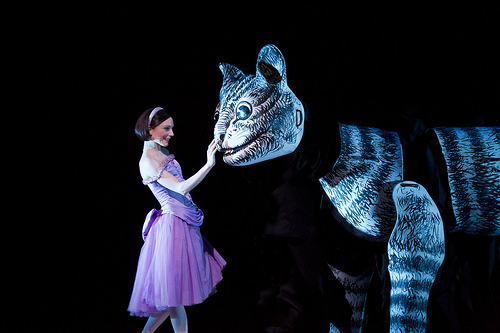 Wheeldon’s Wonderland is curiouser and curiouser

It is the story we all know and love: rabbit holes, caterpillars and playing cards. Christopher Wheeldon’s new ballet brings Alice’s adventures vividly to life. Beginning with the musical ticks of multiple clocks, we are led to the normality of Alice’s family garden party where the children are being told a story by Lewis Carroll, while Alice and the gardener, Jack, share coy looks. However when a white fluffy tail bursts through the suit trousers of Lewis Carroll, Alice jumps down the rabbit hole to follow him. In Wonderland the characters at the Victorian garden party reappear in new guises.

The Queen of Hearts (Zenaida Yanowsky) was a particularly comedic highlight. She spends most of the first two acts being wheeled around in a wooden heart contraption and ordering beheadings, but in the final act she comes into her own. As the heart opens to reveal a quivering King, the Queen is greeted by various suitors. In a parody of the traditional suitor scene in ‘Sleeping Beauty’, the Rose Adagio, the Queen is twirled around by terrified suitors who narrowly miss being knocked out by a flailing leg and do their best to avoid all contact. In place of the traditional rose, each suitor presents the Queen with a jam tart to try and must be faced by her verdict on whether it is up to scratch. The traditional elements of a ballet are all there, waltzes, pas de deux, Rose Adagio, but they are all given a contemporary twist filled with colour and liveliness.

The Mad Hatter (Steven McCrae), or Mad Tapper as he is rebranded here, is another highlight. He is a whirl of tap-dancing energy in a tie-dye tail coat, pink streaked hair and green top hat, legs forever moving as he navigates the trampoline sponge-cake and tea-cup stage lights.

Sarah Lamb as Alice is captivating, and her joy on exploring Wonderland is infectious. She is forever lively even when merely observing, and she melds with the audience at times, as if seeing this new world for the first time. Her best moments include her transformations from large to small, and the beautiful dances she shares with Federico Bonelli as Jack, a romantic and captivating performance.

The Chesire Cat, a collection of giant floating body parts which vibrate when Alice accidentally runs through them is particularly effective, impressive and funny simultaneously. The Caterpillar, though onstage only briefly, is also visually stunning, a blue visage of crystal feet.

The Duchess’ character wasn’t given much to do, other than showcase her costume and set, and Alice could have done with some more moments of frustration to develop her as a character. The slow-moving King was relatively dreary, as were his attempts to woo his Queen. The modern ending, camera phone in hand, added little to the world of fantasy created throughout the rest of the production. But ultimately, characterisation across the ballet was approached with a vibrant theatricality and liveliness.

The ballet copes with the many visual challenges of such a story very well. Bob Crawley’s set design is exceptional. Towers of tea cups and wobbling jellies are placed on long tables ready for tea. An embroidered ‘home sweet home’ sign opens into the chaos of the Duchess’ kitchen as the Cook pours pepper over the crying baby and wields her chopper around with dangerous enthusiasm.

Poking her head through a small door in the middle of the stage Alice looks out into the audience as dancers in tutus of petals dance down the aisles. Unable to fit through the door, a bite of cake and gulp of liquid later, her head is bent against the ceiling and her tears are causing a lake of water around her. The use of projections is very effective, as projections meld into physical objects onstage, and a falling puppet of Alice turns into the dancer herself.

It is a whirlwind of colour, accompanied by a perfect score that matches every moment on stage with ease. Watching this ballet, we are truly taken to Wonderland.