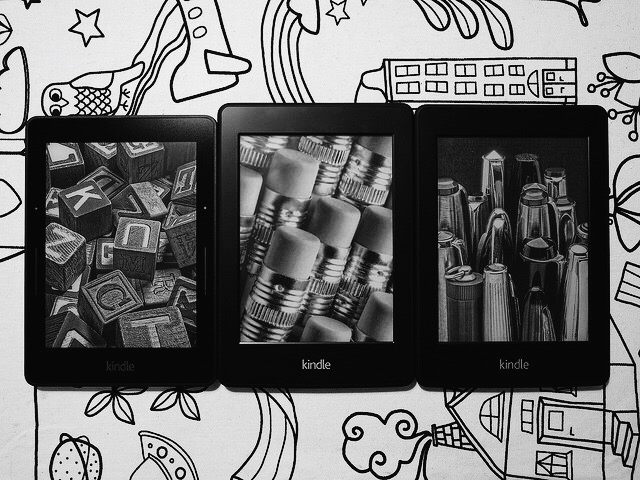 Amongst its crooning assurances of crisper-than-ever display and many other features qualified invariably by the words ‘new’, ‘improved’, and ‘haptic’, the triumphant swathe of text on the Kindle Voyage’s Amazon page embeds a couple of summary quotes, blown up. One of these is from Jules Verne, French novelist and playwright: “You will travel in a land of marvels.”

You could do worse on the 25th than to find in your stocking a Kindle Voyage, depending, of course, on your opinion on this kind of thing. The newest iteration of Amazon’s popular e-reader, released in the UK last month and present, no doubt, on the Christmas lists of many, the Voyage continues the closing of the gap between ‘real’ books and their digital representations. It reads more like the printed page than any of its predecessors; its thinness is one step closer to paper­-thinness. How near are we to the moment when the argument in favour of the ‘feel’ of a physical book becomes invalid?

One thing’s for sure: Jeff Bezos and co. are treading on touchy ground, quietly and busily advancing the technology while debates rage about whether e-books are Satan’s spawn or the logical if Luddite-irking next step for the written word. It’s necessary, I think, for Amazon to maintain a sort of self-limiting respect for the culture of reading, even while it spearheads the e-book revolution.

And besides a few PR hiccups early on (in 2009, Animal Farm and Nineteen Eighty-Four were mercilessly mass-deleted from Kindle-users’ libraries over a publishing technicality, leading many people to point out the irony), that’s exactly what has happened. The Verne quote may be melodramatic, but it exemplifies what has been a central feature of the company’s philosophy since the original Kindle’s release in 2007: recognition of the importance of literature and of those who love it. Bezos incidentally talked in a recent interview about “a healthy culture of long-form reading”. There is a sense of care.

The Verne quote, indeed, points to one major benefit of the Kindle and of e-readers in general: portability. There’s no way you can have your extensive hardback collection with you at arm’s length on any train or plane. In the modern world, hyper-connected and ever-bustling, e-readers are for bookworms the answer to unique problems posed by combining reading and travel. On one sleek tablet you have access to as many books as you want (and unlike with a ragged copy of Infinite Jest and a pencil, you can annotate them in public without looking uncool).

For those going on extended journeys, this portability is invaluable. The difficulties of certain travelling bibliophiles of yore put into marked perspective, I hope, just how liberating e-readers can be. William Hazlitt, arriving in Sardinia in 1825 with a view to traversing the Alps and seeing the Grande Chartreuse, took a book-filled trunk with him, packed with John Milton, Francis Bacon, some French theorists, and various newspapers. Apparently seen as “the corrosive sublimate that eat out despotism and priestcraft”, the books were confiscated at the customs house, to be forwarded to Hazlitt only once he’d left the Kingdom.

Granted, literature these days doesn’t court the threat of intervention that it used to (unless it’s dubiously-published Orwell), but the relative convenience is undeniable.

I sometimes wonder how necessary a Kindle or Kobo is for the daily commute, though. The image of the metropolitan man or woman in constant to-and-fro and in need of some electronic solution to the book problem seems potent at first, but really, how many books can you read on one train journey? If you’re able to pack an e-reader in your suitcase you’re able to pack a couple of paperbacks.

And while it may be true that the gap between the physical and digital ‘feel’ of the reading experience is getting smaller all the time, there are definitely still some practical benefits to sticking with the traditional book. The apparently chronic prevalence of spelling and formatting errors in Kindle’s e-books, to which 1-star reviews (consigned in their indignation to the bottom of the page) often testify, raises the question of whether the industry as it stands is sufficiently developed to justify complete abandonment of the traditional format.

This is not to mention those aspects of the physical book which, for many bibliophiles, transcend considerations of convenience or hipness. As is sometimes the case with the reactionary position, the defence of the traditional book is often borne more of nostalgia and affection than of political or social concern, and it’s pretty understandable. The smell of a book, the very fact of its vulnerability, and the novelty of a high-rise, cluttered, colourful bookcase are all important factors for many people, factors which Kindle can’t compete with.

Whatever your particular standpoint, it remains the case – happily – hat the land of marvels to which the Verne quote refers is, really, neither physical or digital, but found in the words themselves.