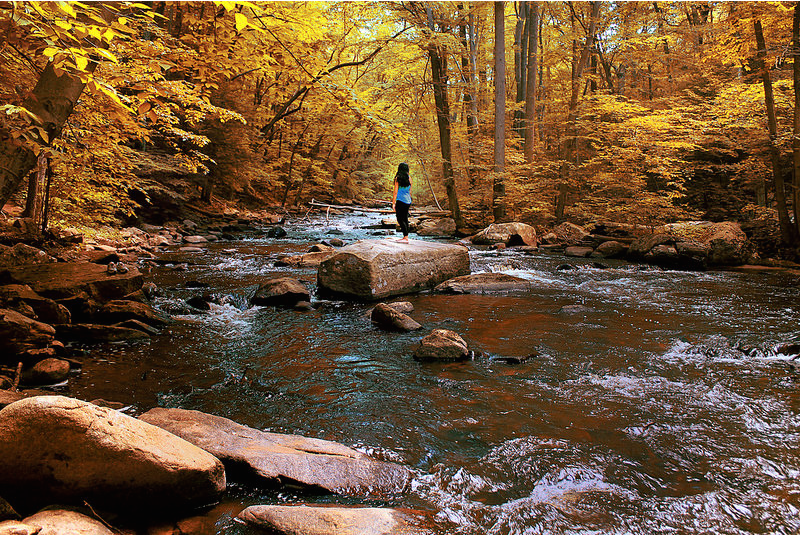 I’ve been to the river in a village on the outskirts of town only three times in my long life. The first time was one of my happiest days, and the second one of my most miserable. The third visit, of course, fell somewhere in between.

In the summer of 1963 the grass was dry and hummed with insect song as we ran over it, giggling and shrieking, shedding our clothes as we went. I slowed to watch her, a lone figure against an empty horizon, plop into the water, and rise for breath like a nymph in the dawn light. We stayed and bathed and paddled and splashed and lay naked on the muddy banks, until people began to appear further down the river. Then we shrank back into our clothes and sat in the branches of a willow until the water was quiet once more. I asked her to marry me within weeks, and soon we were secured by a pair of gold rings.

It seemed a different place when I came back, nearly twenty years later. She had left me for what was to be the last time, I was sure of it even then, in that particularly stifling August. I returned there in September. I crawled into the curtained clearing of the willow tree and curled up like a child. I rocked back and forth and shuddered at my memories, which now seemed like somebody else’s. I thought of the supple, gliding figure and wanted to scream. All there was left for me in this place was the low morning mist and my persistent solitude. Then the rage swelled inside me, like white noise behind my eyes, and there was something pressing on my lungs, and I felt so very sick. In one swift movement I wrenched the gold band from my ring finger and tossed it into the river. It did not help at all. I would not – I could not – take it back. Yet, I needed it to remain, to be somewhere, not lost, not destroyed, not the possession of someone else. My marriage was no longer in my hands, but I was not ready to forget it. I crept over to the bank and peered into the blue, to see my wedding ring blazing at the bottom. I recognised, despite my embarrassment, that it looked better among the shimmering pebbles than it had on my finger for many years. So I left it there to become part of the weeds and riverbed. I dusted myself off and walked back across the meadow.

There is something about old age which instils in one a true sense of calm contentment. Despite my body having aged and tired, I have never been as comfortable and happy in my own skin as I am today. Or as I will be tomorrow. It has been many years since the end of my marriage, and today I cleansed myself of any residual pain. Today I went back to the river to see the wedding ring, to see how something which had once been so much part of me was now part of the landscape. I wanted to see its new identity, and thus reflect on my own.

I walked back across the grass, now green and dewy, towards the familiar willow tree. My solitude now felt like strength. I paused at the water’s edge, unbuttoned my clothes and slid into the soft folds of the water. I stretched my body and dipped my head beneath the surface. I felt new.

It was only when I had found footing and swept the water from my forehead that I saw my little gold band. I stepped towards it, and then instantly back. My little gold band had become three. I ducked once again beneath the surface, and forced myself to open my eyes. Nestled beside the sloping wall of the riverbank, within a crevice in a large rock, were three shining wedding rings. Running out of air I propelled myself forward and clutched them, then dropped them on the grassy verge.

I could tell easily which ring was mine. The other two were entirely unfamiliar. My first thought was how strange it was that two others had lost their rings at that very spot, or blindly thrown them into the water as I had done. It took a few seconds for me to realise that my ring had, just as I had hoped it would, taken on a new identity. It was now just part of the landscape. That crevice in that rock in that river had become something, somewhere in its own right. It was a place for things which could neither be kept nor truly lost. Out of all the pain I felt that day had risen freedom, calm, space for thought. Like a nymph from the river.

Today I am peaceful. Today, I am new.