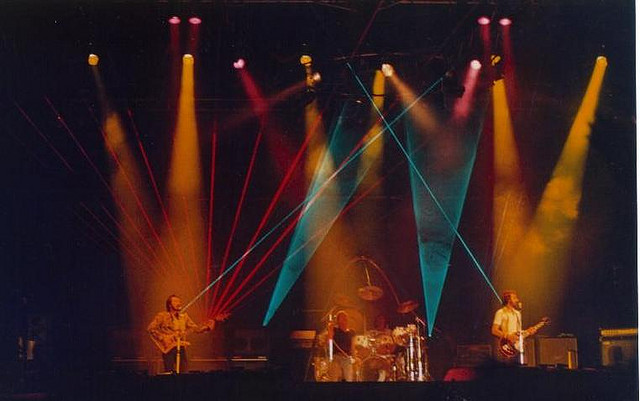 The Who are still talking about My Generation

As I saunter through the gates into the entrance hall of Newcastle’s Metro Radio Arena, one thing becomes abundantly clear to me. Tonight, this humble Arena is host, not merely to nostalgia set to guitar, bass and drums, but to a gathering of the former, or, in some cases, not so former devotees of a bona fide youth subculture.

The Who’s marathon 50th anniversary tour, which has already swept through arenas throughout the UK, and will still be in tireless full swing well into 2015, represents a touching reunion for the country’s retired Mods. While the bob-cuts are somewhat greyer than they used to be, the mood is jovial, the atmosphere tight-knit, and the alcohol surprisingly cheap for an arena gig. While the young are by no means absent from the scene, and indeed, I’m almost scandalised by how under-populated it is in general (youth of today, shame on us etc. etc) the audience here represents a fifty-year, unbroken chain of rabid, almost cultic, fan loyalty.  Some are no doubt a heady mix of assorted civil servants, accountants and plumbers, who’ve delved into their wardrobes to dig out their old duds for the occasion, others have kept the fire resolutely burning; it doesn’t matter. Here, they’re all united in their purpose; to see the last two surviving members of a legendary band do what they do best.  As if to confirm my observations, the lovely elderly gentleman I’m sat next to needs no encouragement to delve into his wallet and retrieve a pristinely preserved ticket for a long-since-passed Who gig at a long-defunct Newcastle venue; he even deigns to let me touch such an imperishable artefact with my grubby youthful fingers.

We can understand then, the unenviable situation that opening band Maximo Park find themselves in; this crowd, more so than any other, couldn’t be less interested in support acts. Luckily for them, lead singer Paul Smith reads the audience like a book. His stage patter is self-deprecating without being self-effacing, and he has the sense to acknowledge his band’s position on tonight’s food chain; the ‘pointless support act’ jokes at his bands’ own expense as come thick and fast. In addition, the frankly great performance the Mancunian band deliver off-sets this rhetoric; Smith reveals himself as a wonderfully effervescent frontman, and the band are at their best when at their most energetic, delivering catchy post-punk workouts with relentless zeal. As a result, they receive round after round of warm applause from the crowd, and by the time they close with ‘Apply Some Pressure’, the hearts and minds of the old guard have been convincingly won.

However, the main event is yet to come in its joyous entirety. Instead of the large-scale, theatrical opening we might expect from the inventors of the modern rock opera, the two surviving Who members simply stride onstage and crash straight into ‘Can’t Explain’. Backed by a stellar group of musicians, Daltrey is bombastic and smiling, Townshend dour and cantankerous; ever the almost comedic double-act they always were, the pair treat us to a marathon twenty-four song set, no less than a glittering career retrospective. It’s utterly beautiful to behold. The early material shows itself first; the opening riff of ‘The Seeker’, propelled by Zac Starkey’s propulsive drumming, sends me into a tizzy three songs in, and I proceed to gleefully shout every lyric at the top of my lungs. In addition, each song is accompanied by appropriate visuals from the impressive stage display. ‘The Kids Are Alright’, ever the perfect pop ditty that Paul McCartney wishes he could have written and delivered with its sunny harmonies flawlessly preserved, is accompanied by scenes of the Vesper-riding youth of yesteryear. It’s a shameless nostalgia-fest, certainly, but it doesn’t pretend to be anything else. The set goes from strength to strength as advances; ‘Behind Blue Eyes’ is as stirringly affecting as ever in the hands of an impressively dynamic Roger Daltrey (who, we must remember, turns 70 this year), and I can’t stop myself from moving when the rock barges the ballad out of the way half-way through. However, the high point of the set, to state my own personal preference, comes in the double whammy of two compilations of choice cuts from the band’s two titanic rock operas, Tommy and Quadrophenia. To speak of the former, ‘The Amazing Journey’ is coupled with awe-inspiring, explosive visuals from the stage while preserving the storytelling fervour of its recorded original, and a monumental ‘Pinball Wizard’ presents the most raucous sing-along of the night, with Daltrey every inch the cavorting ringmaster of his younger days.

However, tonight the Quadrophenia material clearly triumphs. Townshend’s delivery of ‘I’m One’ is powerful and determined; as a hymn to individual, personal might, few songs can trounce it. The effect is heightened by the appearance of some old, and dearly beloved faces. A thundering bass solo permeates a steamrolling ‘5.15’, courtesy of the late Jon Entwistle, whose recorded wizardry is presented alongside the live band, and deceased drummer Keith Moon’s raucous vocals barge into ‘Bellboy’ like an uninvited, but never unwelcome guest. Yes, again, it’s nostalgic, or some may even say macabre, to have the voices of dead musicians alongside the living, but here, the effect is mesmerising, and the emotional impact on this audience is completely undeniable. Not to mention it was achieved completely devoid of bloody holograms. As tonight’s Quadrophenia set closes with a jaw-dropping ‘Love Reign O’er Me’, proving that Daltrey’s voice is still a beast to be reckoned with, even the likes of ‘Baba O’Riley’ and ‘Won’t Get Fooled Again’, while still awe-inspiring, seem anaemic after the majesty we’ve just witnessed.

As an afterthought, we can rest assured that Pete Townshend is still the same gloriously grumpy bastard he always was. During one of the set’s negligible low points, the dubious ‘Eminence Front’, he, despairing of the technical issues posed by his guitar, simply takes it off and chucks it halfway across the stage. Petulant? Maybe, but still spectacular, and, if anything, a reminder of the place these men come from, and the audience they represent. As the band re-enter for their encore, a hip-shaking ‘Magic Bus’, you realise that, at this point, the histrionics don’t matter. Such was the enthralling nature of tonight’s performance that it took me about three hours after leaving to realize that they didn’t play ‘My Generation’ (which, again, doesn’t matter). Phenomenal.