Twelve people were shot allegedly because of a picture of Mohammed. Much of the horror and outrage that we have since seen in the media comes from the horrific nature of the shooting. Yet much can also be attributed to the idea that just because people disagree with you, they can silence you – that just because you have spoken freely and offended somebody, your voice can be taken away. Vast crowds have come together – including more than a million in Paris, to condemn this assault on one of the most hard-won and treasured values in our society.

The attack on Charlie Hebdo was one of the most violent and disturbing attempts to silence free expression, but there are less shocking examples of it everywhere, everyday – on every level and from every political leaning. From the sentencing of Raid Badawi to ten-years in jail in Saudi Arabia for creating a website for political debate, to the closing down of the Oxford Students for Life debate on ‘Abortion Culture’ – this censorship comes from diverse political viewpoints. It is becoming increasingly common for people and groups to be sanctioned for something they have said, or ‘no-platformed’ for they might say if they had the chance.

Those arguing for the no-platforming of individuals do so because they believe that the censorship of free expression can be justified where one person’s right to free speech conflicts with someone else’s right to protection from its harmful consequences. Yet, this leaves us on a sticky wicket, for how do we determine and quantify ‘harmful consequences’? By harm do we mean death? Injury? Mental distress? I believe it is right that the law protects people from the incitement of hatred that can directly lead to physical or mental harm, but we are increasingly seeing examples of debates shut down purely because they are deemed ‘offensive’ to others, and it is with this argument that I contend. Offence is insufficient harm to close down a debate.

The Oxford Students for Life debate was not the only debate to be shut-down in Michaelmas term – a debate on the Cuntry Living Facebook page about the eradication of gender was also shut down on the grounds that it was offensive to trans people and incited violence (which, in my view, it did not). Such knee-jerk reactions to comments deemed by some as offensive are baffling, especially in institutions where one would hope that freedom of expression would be highly valued. This is especially true when others take offence on behalf of the supposedly offended parties.

There is no logic to the argument that we can have freedom of expression for some but not for others – surely it should be obvious that by silencing non-conformists the ‘no-platformers’ are demonstrating exactly the kind of moral superiority that other societies use to deny people their freedom and often much worse. They are insistent that their moral code is correct, but if there is one thing that both an increasingly globalised world and a quick scan of history can tell us, it is that there is no such thing as a universal moral code – what is deemed ‘right’ and ‘wrong’ changes both temporally and spatially.

Yet those against the Oxford Students for Life or the gender eradication debates decided that their offence was so great, and their opinion so right, that debate was not an option. This is an untenable position – who are they to decide that their offence is so great that an opinion should be silenced? As John Stuart Mill pointed out, quashing speech can keep us from discovering truths, and stops us from reconsidering and reinforcing our own beliefs. Silencing ideas has a history of backfiring – it does not destroy them, it merely leads to their re-emergence later down the line in a more potent form. We cannot expect views we disagree with to go away if we do not confront them. Silencing the pro-life society will not persuade them to support abortion rights.

Censorship is not the solution, nor is it  a neutral position. A newspaper printing a controversial opinion piece or a college hosting a controversial debate is neutral. Offence itself is not created – it is taken. It is up to those listening to decide whether they will be offended, and those who are talking to decide how much offence they might cause. In an effort to maintain social harmony, free speech is being eroded.  Our society has become intolerant of intolerance. We are no longer allowed to upset or offend people in the slightest. In most circumstances, that is fine – most reasonable people exercise consideration for others and try to refrain from offending without reason. But, the most important aspect of free speech is about challenging social, cultural and political taboos and values. In these matters, we need to speak up where we do not agree or else we will never see change. Many religious groups were offended when the same-sex marriage bill was passed, but did we no-platform LGBTQ rights campaigners? We did not, and we should not.

I am offended by the drivel that comes out of Nigel Farage, Nick Griffin or Marine Le Pen, but should we silence them? No we should not. Different groups will always be offended by different things –we cannot simply suppress all potentially offensive viewpoints.  We need to engage with people we disagree with, understand their arguments, debate them and refute them. Silence, not offensiveness, is the real crime against humanity.

Are student Conservatives unfairly vilified for their beliefs?

The Reply: Society without religion 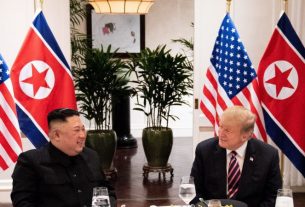 The Vietnam Summit: An end to the “fire and fury”?