Silence, waiting, waiting. Gus (Adam Leonard) ties his shoelaces. Gus unties his shoelaces to find a squashed and empty cigarette packet lodged beneath his sock. Removing this, he reties them. Ben (Tom Marshall) reads the Sun disapprovingly, lying on his bed, braces on, waistcoat at the ready.

This is the brilliant beginning to Pinter’s sharp dark comedy ‘The Dumb Waiter’. A play about waiting might not sound like the most enthralling thing in the world, but I was not bored for a moment. Compelling performances have been well-directed by Tom White, so that the play never stops moving even in the lulls of silence.

Comedy interlaces the dark reality of the situation – two hitmen waiting for their next victim – as Gus remembers the mess of the last girl they killed, interspersed with great appreciation for the striped plates – “he’s laid on some very nice crockery this time” – and a persistent desire to try and catch a football game after the job – “we could go and watch the Villa?”.

Mysterious orders of scampi and jam tarts from the dumb waiter, and what they are certain is some kind of Greek dish, must be answered with the only food they have to offer – sprinklings of crisps, some biscuits, and one stale Eccles cake wrapped in a Boots bag.

The comic timing between the two actors doesn’t lapse for a moment, always sharp and slick. Every line is delivered en pointe. Gus, in particular, stood out, the centre of the comedy, asking question after question, yet perpetually tinged with a confused vulnerability.

The power struggle was not as apparent as it could have been, perhaps in light of this, yet this is a small criticism for a production that depicts a relationship so truthfully, so emotively, despite the continuous sinister undertones of their situation. As the play develops we learn more about their relationship – years of working together it would seem, since they first took their tests together. Ben is in charge, measured and still, in contrast to the pacing, “jabbering” Gus, creating a brilliant dynamic between the pair. Simple easily explained actions take on a deeper, darker significance in the context of the play. The dumb waiter orders coming from above beg the question, who is really upstairs? And how much do either of them know?

Darkly comic, brilliantly acted and unexpectedly emotive, this is a chilling piece that will have you laughing until the last moment. 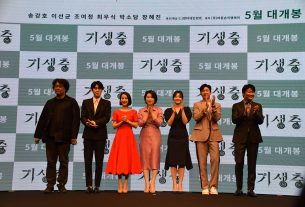 Political Biopics: Watching the lives of others