Since 1993, opera director and producer Ellen Kent has been turning the tables on public perceptions of what opera is.

Known and loved for their traditional staging, lavish sets and international cast, over six million people have now seen an Ellen Kentproduction. Each year, she tours three productions all around the UK and Ireland, and will be returning to Oxford with Madama Butterfly, Rigoletto and La Traviata from 19th to 21st February.

I ask how she came to direct opera and she tells me that the path to “outrageous success” was not so straightforward. Ellen “always wanted to be a performer” and after a Classics degree at Durham University, she trained to be a singer, gaining an offer to study at the prestigious Royal Academy of Music. However, acting was the path she ultimately took; training at the Bristol Old Vic theatre company and then acting in musicals, radio drama and television.

But the streak of a leader was always in her, and Ellen “had never liked being told by directors what to do as an actress. I’d much rather tell people what to do and have my own ideas”.

In 1984 she created a theatre company and soon started bringing tours of national theatres to Britain. Her first opera tour was with the Romanian National Opera and she has “never looked back”.

Being a director is a high pressure job, but Ellen has the right mind-set for it. “I’m the sort of person that likes to live on high adrenaline, I’m an entrepreneur, I take risks. I enjoy risks! These things are very important.”

We discuss public perceptions of opera as being just long and boring and she notes the necessity of keeping art forms such as opera popular in any way possible. “If you have a restricted audience for an art form, it will collapse on itself. You need to open it to the masses because that’s the audience that will keep it alive.”

Ellen is not afraid to flaunt her achievements, saying: “I’m actually sure that I’ve kept opera very much alive in the regions and in London.”  High quality opera is harder to come by outside of London so Kent has really impacted those who live outside of the capital and want to see a large scale production.

Moving onto her personal tastes, Verdi’s opera Rigoletto is one of her favourites to put on, but she laments that it is not the most popular. “I think people are very conservative with what they see, and they’ll go to the known works. Rigoletto is slightly on the edge, but when you see it, it is simply breathtaking.”

So how do you make people want to go and see your operas? “Well, I have my own style, which is basically to make it as near to music theatre as I can, because that’s where the big audiences are.”

Despite saying this, Ellen’s opinions on musicals are not always favourable. “I don’t like that awful style of acting where the acting is all two-dimensional and the all shout and they’re mic-ed up – that style is too sharp.” For her, opera is a more nuanced form, and of course the music is always beautiful.

The visual aspect of opera is also very important to her. Working under the description of “traditional with a sexy twist”, her productions have fabulous sets and she says her bespoke gowns are so beautiful, “they could be Chanel”.

She certainly doesn’t hold back in her productions to achieve a high visual impact: in Carmen she uses a white stallion and a donkey, and in Rigoletto has a golden eagle and greyhounds. She wants everything to “look like it should look”. This extends to her cast, and for the chorus she will go for “young looking girls who are beautiful, and handsome boys. I want a filmic version of opera”.

While this attitude to casting and production may not please the purists, it has certainly worked for her. She acknowledges that “EllenKent is now a brand name, and I’ve been doing it successfully for many many years now”.

Typically opinionated and direct, when I ask her what she thinks about productions that attempt to update an opera and put it in a modern context she says: “Frankly, I don’t see the point.” She thinks the most important thing is that an opera should be “a visual feast”, and audiences want to be lost in a different world.

Chatting with the Catweazle 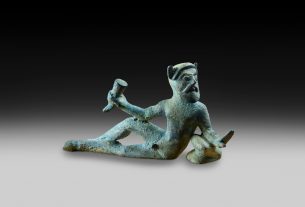 Last supper in Pompeii: a review