Wearable technology, at least for now, is a misleading term. I mean, sure, they are technological objects that you can literally wear – but are they truly wearable in public, outside of the safety of your own home?

That was essentially a convoluted way of saying that people look like idiots wearing Google Glass. Technology these days doesn’t exactly scream ‘wear me!’ And, quite frankly, carrying things in pockets has never been a struggle.

I mean, sure, the chosen of colour of your iPhone 5c may allow you to express things about yourself you never thought you could before, but all in all, wearable technology tends to be ugly and largely masculine.

The Samsung Gear S watch is large and rectangular – it just looks exactly like a tiny phone placed onto an ugly bracelet. There is no evidence of any effort having been exerted to adapt the Samsung smartphone designs into something that someone might actually want to wear.

Techs seem to have misunderstood what it truly means to incorporate electronical technology into items of clothing or accessories; they have interpreted fashion in a literalist way. Style has been replaced by an instrumental view of accessories. Yes, I can physically wear the Sony Smart Watch 2, I just don’t fucking want to.

It’s about time techs collaborated with fashion designers. It’s also time the tech world confronted the fact that women use technology too. In a male-dominated industry, the target of smart watch developments seems to be the male market. The watches are clunky, manly – and generally just not very nice, even for men.

Aside from the fact that, in its current state, technological fashion is remarkably unfashionable, we must ask ourselves if wearing electronics is something we even want to do. It’s not exactly the self-evident next step. The way I see it, it’s not just our overall stylishness but humanity itself that is at risk of serious decline if we allow our world to be constantly filtered by something like Google Glass. Yes, I just made a huge claim.

In an age where we can barely communicate to one another without constant technological interruptions, where we struggle to read a bloody book without checking Instagram or responding to WhatsApps, where a dinner with friends often results in the realization that everyone is on their iPhones, do we really want to open ourselves up to an absolutely constant and inescapable technological presence? That presence, to me, simply means interference.

We might be in better hands with a technology industry that focuses on electronics that we can actually put away, rather than wear. 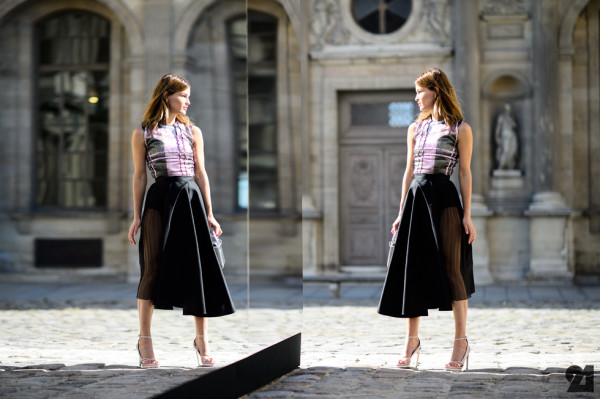 Always be… anyone but yourself

Goth hate: a crime against fashion?