Adaptations are no easy feat. When the text in question is being adapted for stage, rather than the screen, when its subject matter is life in Heian-period Japan, and when it is being adapted from the Japanese, the task, though not impossible, is very difficult indeed. This production does not quite pull it off, but it is well worth watching all the same.

As I Crossed A Bridge of Dreams is a memoir by Lady Sarashina, a lady-in-waiting born at the beginning of the eleventh century. The memoir takes us from Sarashina’s childhood between the provinces and the capital, through her captivation with reading ‘tales’ and self-contained adolescence, her secluded adulthood, to her marriage and the eventual death of her husband. This is rather a lot to fit into a 75-minute play.

Adapted by Harriet Rowe and Laura Cull, and directed by the latter, the BT production whizzes us through epochal events in Sarashina’s life. The creative team have opted to bring Sarashina’s memories to life through dance and music, making for an adept and innovative production, but inhibiting attention to words and character experience. With attention on other media, and so much material to get through, the narrative of Sarashina, ably played by Hannah Scott, is reduced to telling, not showing. Her hopes and fears and dreams, the essence of the play, are asserted rather than dramatised; the words are not given space. This occurs throughout. It is a fault of the production, not of delivery; there is almost too much going on for the words to be given the opportunity to resonate. When one character refers to the pain of grief, to ink being frozen up and a stream of letters congealed, the beauty of the language is not surrounded by sufficient silence to have its due impact. This is a play that needs more time.

The interweaving of myth with story, however, is commandingly done, and well-served by intervals of music and ballet. As Sarashina’s ‘tales’ relent from her mind, giving way to the sadnesses of reality, it is intriguing to witness the way in which Sarashina’s tale-weaving continues, even though she may not realise it. Shirk her stories though she might, they have claimed her and will not let go.

The BT studio is not the best venue for a production of this sort of scope. The ballet needs more space to be danced and more distance from the audience; the play itself, which is an embellishment of narrative rather than a dramatization of a life or a play in its strict sense of action, would be better suited to a larger stage. Intimacy with the cast when they are, as here, largely symbolic, feels distracting. The cast itself is strong, with admirable performances from every member.

As an adaptation, As I Crossed A Bridge of Dreams could be better conceptualised. Is it naturalism; does it function through symbol and gesture; what is the role of the different media as regards the naturalistic storytelling; are the cast members to tell a story with actions, or to act? No doubt these issues would be clear if the play was lengthened. Much of it feels rushed, with momentous occurrences portrayed as incredibly significant and then brushed aside within seconds. Nevertheless, the moments themselves often take place beautifully; I was particularly struck by the relationship between Sarashina and her sister (played by Sophie Sparkes), then by the latter’s death. This scene works so well because the actors really have the opportunity to inhabit their roles, instead of having, in the case of Sparkes, always to switch between characters, or, in the case of Scott, to keep up a stream of narrative that precludes contemplative engagement with the implications of the words. Perhaps a voiceover narrator would have worked better, so as to give Scott’s performing a chance to shine as much as her articulation.

This is a production whose component parts are stronger than its whole: an important and difficult achievement. Visually, it is compelling; performances are skilled and attentive; the play’s language is thoughtful and tranquil. Like the rest of this production, it wants just a little more time under the spotlight in order for its finery and subtlety fully to emerge.

Indeed, the world of ‘As I Crossed a Bridge of Dreams’ was certainly strange… beautiful in concept and origin, yet executed to a somewhat perplexing, almost wearying effect, unfortunate for a piece with so much promise.

Laura Cull’s production centres upon the life and imaginings of Lady Sarashina, a young woman in 11th century Japan devoted to creative tales and storytelling to the neglect of her religious devotion, and one who would ultimately have to come to terms with the harsh realities and trials of life.

The Japanese storytelling effect at the heart of the play came across well, and although its characteristically somber tone was achieved, there was something in this solemnity which for me just didn’t quite work effectively, lacking energy and the necessary magic to fully captivate an audience and fill the blank stage. There were certain admirable performances, especially from Jake Mercer, as both the concerned father and the lyrical gentleman, as well as Chloe Cheung in a variety of roles. However, the pacing of the scenes, though obviously meant to be quite staid and sedate, conveying the gravity of omens and power of certain images and dreams, really dragged in some places, adding a sense of heaviness to the already melancholic trajectory of Sarashina’s life. Perhaps the pacing issues can be put down to first night hesitations, which in following performances can be turned into well-oiled transitions, making the hour-long performance feel less like a two-hour one.

There was something very stagey and static about the whole production, without achieving the highly stylised effect I feel that it was reaching for, unable to fully transport the audience to the reinvigorated world of the ancient Japanese text it originated from. Stasis and solemnity shouldn’t be at the sake of energy and variation of tone, especially in a piece so focused on the wonders of storytelling. Many of the multi-role characters in this way blended together, individual characterisations lacking diversity of voice and countenance. The sense of Sarashina’s isolation was well captured yet a lack of varied facial expressions and development of character left you grasping for a sense of progression in the plot, as well as any indication of the gradual aging of the female lead, played by Hannah Scott.

This being said, the physicality of the piece was very effective and it would have been excellent to have more of the highly crafted ensemble scenes, utilizing and filling the blank space of the stage with vivid tableaus and fluid movement. The riverboat scene in particular was very well executed and a highlight of the production, both visually and orally. The balletic grace of the two main dancers, Steven Doran and Marta Valentina Arnaldi, greatly lifted the narrative scenes and effectively captured the entrancing images of the girl’s imagination with great skill and inventive choreography. The texture of sounds created by the live strings accompaniment and the intertwining of voices was also very effective, together with a highly successful use of lighting to help vary the mood and tone of the scenes.

What seemed to be a beautiful and interesting script unfortunately failed to mesmerize on its first night at the Burton Taylor. Although an interesting fusion of dance and theatre, the crucial element of storytelling was lacking in its imaginative transportation, the stylized performance unfortunately leaving the audience firmly in Oxford rather than the mystical world of the Orient. 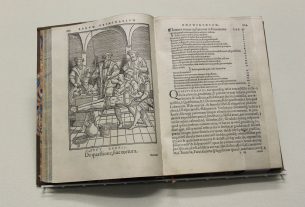