The Vitality Half Marathon has run annually since 2011 and this year the race drew together large crowds and an impressive number of participants. Fortunately for the runners, the weather was a pleasant 10°C and bright, affording them not unpleasant running conditions and picturesque views of the host city.

The start of the event did not begin quite as smoothly as had been hoped, with a number of runners getting stuck on trains. A delay of about an hour on the service between Reading and Didcot operated by Great Western Railways led organisers to postpone the start of the event by 15 minutes; any longer would not have been possible due to commitments to cause as little disruption to traffic and reopen the roads on time. Nonetheless, once everyone had arrived and warmed up – notwithstanding an incident in which one elite runner was led off course – it was considered to be a successful event.

Starting at St Giles, the new route turned down Broad Street and continued nearly as far as Magdalen before heading north to pass by the science faculties. Nearly reaching Summertown, the athletes covered much of the requisite thirteen miles on the northern edge of the city, before passing through the greenery of University Parks on their return to the historic centre. The final straight took the determined participants around the Radcliffe Camera, on specially laid mats to protect them from the worst of Oxford’s unforgiving cobblestones, before disappearing down Brasenose Lane to a hero’s welcome back on St Giles.

Steve Naylor, from Witney, won the men’s race in just over 70 minutes, while Fabienne Amrhein, a biochemistry student from Heidelberg currently studying in Oxford, came first out of the female competitors in under 76 minutes.

Amongst the many running clubs, student runners and seasoned athletes were people running to raise money and awareness for charities. Supporters of Cancer Research UK and Alzheimer’s Society ran, as well as fundraisers for one of the half marathon’s official race partners. The national partner was Macmillan Cancer Support, while the local partner was Helen & Douglas House, a charity based in Cowley which runs the world’s oldest children’s hospice and a hospice for young adults.

Neville Koopowitz, CEO of Vitality, praised the high number of participants and congratulated the winners, commenting: ‘We were delighted to see so many runners take part in today’s Vitality Oxford Half Marathon and congratulations to Steve and Fabienne. It was a superb turnout and we look forward to our next event – Vitality WestRun London 10k on November 15th.’ 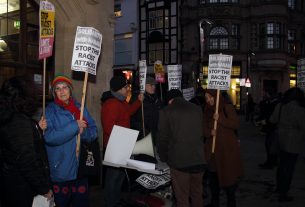