On 24th July 2015, Tianjin Polo Club, China, hosted the opening game of the 2015 Metropolitan Intervarsity Polo Championships. Six polo teams from top universities in England and America competed to earn their university the title of ‘champion’ across five days. The setting was fantastic, with Tianjin’s pristine field and polished stone spectator stands forming a stunning backdrop to the action.

The first game was between Oxford and Yale, and was intensely fast paced from the  word go. Yale was ahead at the opening bowl in with 2.5 goals due to handicap, but Oxford quickly levelled the field with a penalty 3. Louis Maddison, the blues’ back, made an impressive run all the way down field with the ball, knocking it between the posts to bring the score to a tie by the end of the first chukka. By half time, Oxford led 4-3, and then continued to dominate the second half. Yale struggled in an attempt to fight back, which became increasingly difficult with Oxford’s two penalty scores right in front of the Yale goal. The strength which the dark blues displayed across the early chukkas continued right to the match’s close, leaving Oxford in a strong position to face the rest of the championship with a 10-3 win.

In their second game, the Oxford team started

with a two goal lead over Harvard due to
handicap. The game began fairly statically, with continual attempted hooks by both sides, until Harvard broke with the ball and ran it all the way down field, tapping it between Oxford’s posts to bring the score to 3-1. The pace then picked up for the rest of the first half, with horses taken to full gallop and plays happening in seconds. By the time the second half began, Harvard showed that they had settled into the game, with their number three scoring a penalty two and a penalty four. However, Oxford quickly responded with further pressure, keeping the ball just out of Harvard’s reach as blues back Louis Maddison made excellent plays in holding the ball before shooting it up field to his team mates. This pressure proved effective, with Oxford earning another dominating win of 8-3.
The dark blues were in a fantastic position going into the semi-final against Cambridge,
particularly given Oxford’s win earlier in the summer at the Oxbridge varsity match. However, the game was anything but easy; each team met and blocked the other play for play, making for a fast-paced, hard fought match. Lawrence Wang positioned himself perfectly for the Oxford side, receiving Maddison’s well placed long shot to put the ball through Cambridge’s posts and score the first goal. However Cambridge responded by tightening their defensive play, making Oxford’s job trickier in the second half. Despite this, the light blues just lost out, with the final score 5-3.5 to Oxford.

The long awaited final consisted of a thrilling four chukkas between Oxford and Londo.  A particularly smoggy day led to the strange spectacle of dragonflies hovering in the humid air above the field, whilst the biggest, most expectant crowd of the whole tournament gathered in the stands. The game began with Oxford up by four goals due to London’s higher total handicap, a lead which London’s Arthur Cole-Fontayn wasted no time in denting as he completed Harold Hodge’s attack on Oxford’s goal after just one minute of play. The restart saw Cole-Fontayn quick off the mark once again, galloping down the field bring the score to 4-2. Maddison responded with a calm, collected penalty, before London hammered back and scored again, making it 5-4 to Oxford after the first chukka. The second chukka saw a slight knock in the Oxford team’s confidence, with Maddison’s first shot going wide. The unstoppable combination of London’s Hodges and Cooper then proceeded to dominate the field, working seamlessly off each other’s short backhands and long passes to level the scoreboard at five goals each by half time. After the interval, London managed to pull ahead for the first time, hooking Oxford’s Maddison out of an ambitious charge and turning defence into attack by covering half a field to score. With 90 seconds left on the clock for the chukka, it was all to play for. The awe was palpable across the stands as spectators watched London bring their lead to 8-5, then 9-5, responding fantastically to the time pressure and making Oxford’s job much harder in the six minutes which were left after the bell. The dark blues stepped up their attack in the fourth chukka, earning a penalty after two and a half minutes which was coolly dispatched by Maddison. Christian De Koning then played a brilliant defence, freeing space along the boards for Maddison to charge to the goal seconds after the penalty was won; however, the whistle went for an infringement before he could get his shot away. This gave London the final chance which they needed to seal the match, with Cole-Fontayn scoring a simple penalty goal and closing the final of the 2015 Intervarsity Competition with a 10-6 win to London.

Intervarsity marked the end of an action-packed summer for OUPC and a wonderful follow up to our varsity success in June. Each match which the Oxford team played in China was fantiatically hard-fought, with three wins out of four proving the strength of the dark blue side. We look forwards to the events which OUPC will be partaking in this year, following the fantastic opportunity which Tianjin afforded to the team’s development.

The Joys of Test Match Cricket 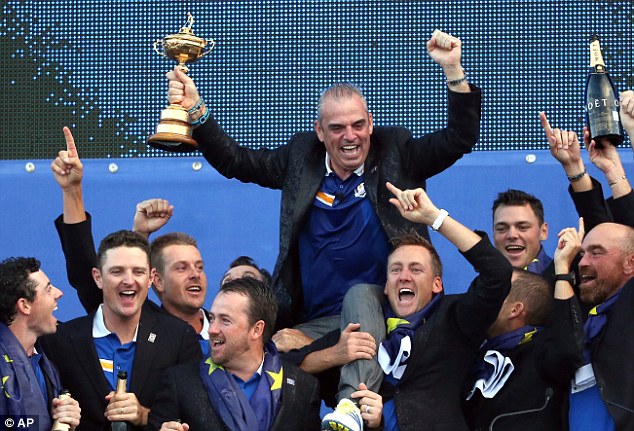 Is Europe’s dominance a threat to the Ryder Cup?