The String is definitely the thing…

If String – a new piece of writing by Lauren Jackson – does anything, it stimulates conversation and debate. Leaving the Burton Taylor after the show I was surrounded by discussions going on in the audience around me, as audience members told each other what they thought of the string: “a metaphor for relationships, perhaps?” “No, it was definitely about the internet…”

Whichever way you approach this innovative work, you can’t get past the string. As the characters kept repeating to each other, “the string is the thing” – a line used so often you began to feel as if the script must resemble some sort of odd nursery rhyme. However, it does strangely work here – the writing is clean, crisp and sparse, leaving lots of space for the characters to interact and evolve without giving too much about them away, and contains beautifully confusing twists and turns that leave the audience disorientated.

The play switches between two realities: one, of a playwright and her friend discussing the play in front of the audience (cue sweeping arm gestures out to the audiences and repeated references to “all of them”); and the other reality of the play that is being written, a fabulous world of pixies from Exeter and of string that sticks itself onto people. The grand concept being alluded to throughout was clearly the internet, but this was never actually discussed – indeed, the abrupt end of the play 45 minutes in surprised the entire audience, leaving us all wondering why “the string was the thing”. And if it was a metaphor for the interconnectedness and inescapability of the internet and online identities, then why was this shown through a magical spool of growing string given to an artist by a pixie from Devon? But maybe this madcap approach is the only way to discuss such a broad topic as the invasion of the internet into our lives.

The lines are peppered with witty remarks that leave the audience giggling almost unconsciously, easing us into a play with quite dark intentions. The main focus of the set – a huge sculpture enveloped in string with hundreds of eclectic scraps of paper attached – eventually becomes a malevolent force. As the playwright states: “anything can get attached to the string, even people.” The early incident of naked photos stuck permanently to the string, though perhaps a slightly obvious metaphor, is an interesting and original take on our virtual, online presences. Apparently the actors were also encouraged to open twitter pages, getting to grips with gaining online presences and attaching parts of their personality to “the string”. But, just in case the subject matter is getting too heavy, there are copious amounts of “dick doodles” on the string as well – a reference to the overbearing presence of pornography perhaps? The author allows us to giggle at the idea of penises attached to a line of string, but still the characters can’t escape its encroachment.

So, back to that evening when I left the performance, surrounded by the murmurs of the audience. Despite the play’s shortness and its slight repetitiveness (if you leave with nothing else, it will be the incessant phrase “the string is the thing”, a rhyme the characters themselves admit is “pure genius”), I thoroughly enjoyed the show. I was surprised, questioned and entertained by its eccentric oddity and it’s interesting approach to the somewhat clichéd subject of internet security, and what more can you ask of a play that gives itself only 45 minutes to explain itself? You can even say that I had become, perhaps, slightly attached. 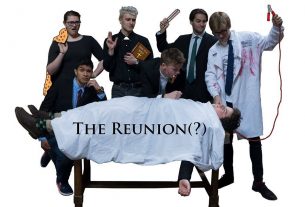 Preview: The Reunion at the BT impresses with its chaotic dark humour