Stuart Lancaster’s four year tenure has come to an end. Many people have expressed their views on a reign that begun with so much optimism, but ultimately culminated in a pool-stage elimination from a home World Cup and the Sam Burgess fiasco, leaving a cloud of doom and despair over England rugby. If we are to really judge Lancaster’s reign we must look at him both as England coach and as a man who sought to bring so much more to the sport.

Sport itself is entirely meaningless: its rules and every result only have any meaning within the construct of sport and the rules created around it. Nonetheless, sport can teach a lot and it is the source of many people’s idols and heroes. Stuart Lancaster sought to use English Rugby for that purpose. Taking over after the media disaster of the 2011 World Cup in which Manu Tuilagi was arrested for jumping off of a ferry and players were photographed dwarf tossing, Lancaster sought to revive pride in the shirt. The greatest achievement of a sportsperson is becoming  a positive role model, inspiring people to emulate them in their determination, leadership, discipline and modesty. By creating a sense of pride and tapping into the history of what it means to represent your country, Lancaster was attempting to create a group of role models proudly flying the flag for their country in a home World Cup. The fact people brought into this is evident when ‘Swing Low, Sweet Chariot’ rang around Twickenham stadium at the World Cup final, one in which England were very much absent.

Many will criticise Lancaster for his idealism. After dropping Dylan Hartley the scrum and lineout was never as solid. Yet, Dylan Hartley is captain of his club Northampton Saints and although the ban was for a contentious head-butt on Jamie George he has a long list of bans. What kind of role model does that show when someone with multiple bans can still be picked midway into the pool stages following a ban, unable to earn his place in the team in the same way everyone else had to?

Despite this Lancaster’s loyalty has also been questioned as he selected players for far too long that were out of form or had spurned opportunities. Billy Twelvestrees is one case in point, as is Sam Burgess. This selection issue is where the line between Lancaster’s idealism and coaching merges. As a coach Lancaster had England playing some of the best rugby they have for some time, but they never stuck to that style. For the Wales game, the biggest pool stage match of the tournament, he reverted to pragmatic conservatism selecting Owen Farrell over the more expansive George Ford. Although this selection worked with Farrell and Sam Burgess solid against Wales’ battering rams he replaced Burgess, moving Farrell to centre and bringing Ford on for the last ten minutes. Why when your team has the lead do you bring a player inclined to try and open the game up on for someone happy to close it out for the rest of the match?

Selection has shown the uncertainty in playing style. Lancaster tried 14 different centre combinations during his tenure, while he capped 43 different players. Many criticised his reticence to pick players, who he deemed inexperienced for big games, without an adequate number of caps, as many called for Henry Slade’s inclusion as Jonathon Joseph’s injury ruled him out of the World Cup. Nehe Milner-Skudder has less than 10 caps for New Zealand, but has won a World Cup. No player, if they are ready, is too inexperienced. Lancaster also did not pick on form and play a style that suited his teams.

On their tour to New Zealand in 2013 the first Test loss was suffered by a team missing all the players in the Premiership final between Northampton and Saracens, but the team only lost by a try in the last five minutes of the game against an almost full -strength New Zealand squad. The week after rather than stick with the team that had come so close to victory despite never having played together, he reverted to the team that included all the Premiership final starters. England lost by a point, but the scoreline deceives the reality of a late comeback in the last ten minutes and a last minute try to bring the scores back to a reputable gap. In that game England’s loss came from attempting to outplay New Zealand with an expansive game which neither the wet conditions nor England’s skill set suited.

Stuart Lancaster will be remembered as the England coach unable to decide on a way of playing, whose tampering with selections showed an uncertainty that often led him to revert to type, selecting a conservative, pragmatic side. He will take all the blame for this, a man who masterminded England’s biggest ever victory over New Zealand, one of only three defeats for the men in Black in four years. He is the scapegoat of Ian Ritchie the director of the Rugby Football Union, given the task of ensuring England made the final of their home World Cup; a man who, having failed at this job, was asked to sit on the RFU review panel to report back on what went wrong and was the one that agreed Lancaster should part company with the RFU.

Lancaster will not be remembered for his rejuvenation of English rugby as a sport’s team that provided affable role models like Chris Robshaw, the unrelenting workhorse that put his body on the line every game, despite the criticism. Lancaster the humble man that was never happy with a performance, always aware of areas to improve on. Lancaster, the man who brought honesty and pride to rugby, who created a group of role models that transcend the meaningless parameters of sport. Lancaster’s reign will merely be the rock bottom of English rugby, a sign of the malaise and near-corrupt organisation of a Rugby Football Union. The organisation cannot accept its own failures so allows a far more honest man to fall on his sword for them, a sacrifice for their own security. One wonders whether the next RFU recruit will be a success or a sacrifice. 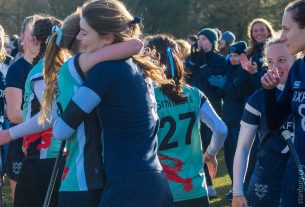