I can’t thank Rio enough for giving me the chance to sit down with him to have a light hearted conversation about his career and his experience of coming to Oxford. Surrounded by adoring fans in the Union bar, Rio made the effort to speak to every single person that attended the talk and even extended the Q+A session to make sure everyone had their question answered.

He was clearly humbled by the opportunity to speak at the Union, “I have never been this nervous in my life”, but Rio walked in with a swagger and oozed class. “It’s a huge honour and a privilege to have even been invited. A kid from a council estate could never have imagined being invited to such a place.” His speech was focused on leadership and the shared experience that he and students of Oxford have as “the elite”, in the respective fields.

Going into more detail about money in football at youth level, Rio criticised the current pattern of giving youth players hugely lucrative contracts as high as £25,000 a week at just 16 years old. “How do you get that kid to get out there to improve? Some kids have not got it in them if you give them this sort of cash too early. There is too much too soon and they are wrapped in cotton wool too!” He talked about his memories of being a young player at West Ham where he assumed the role of cleaning and looking after the kit of the senior players, saying that today’s young players would avoid such graft saying something like “I am on £25,000 a week mate”.

Rio said of Sir Alex Ferguson that “the hairdryer is true, he was explosive at times.”  “When David Moyes came in you could really see the impact Sir Alex had.”  He referred to his ability to delegate responsibilies around the club, allowing people to focus on their area alone whilst he focused solely on the football. “He didn’t have a part in the corporate side of things and would say to Mike Phelan that I don’t want to know what is going on. Moyes came in and he took all of the responsibilities. I remember him saying on tour, ‘It’s unbelievable this…”

One of the most interesting parts of Rio’s talk was when he was questioned by a member of the audience about his pre-match routine. He responded with a Hunter S. Thompson style walk through of every intricate detail. “We could be here for a long time… I was very superstitious because I was so afraid of not winning.” After spending the night before the match analysing the players he’d be matched up against the next day, his match day would start with waking up at “about 7:45, then go down for breakfast” before having a gloriously large amount of foor before then going back to bed and sleeping until about 11:45.

“Music was a big thing, I’d have my IPod in playing tunes; bit of Hip-Hop, old house and garage, reggae or rock and then I’d go to the ground and me and ‘Scholesy’ would play  a bit of two touch in the changing room”.  “I would always have to go out behind the goalkeeper, as I’d leave the changing room and before I get to the white line I smashed a bottle of water over my head and did a little jump. I’d then run to the corner” he pauses and looks to the audience to say “I know this is unbelievable…” before continuing. “If anyone went to Old Trafford regularly they would know where I’d go to the corner, fiddle with my shorts, spin round and then I was in match mode.”

“I used to hate seeing my England team-mates in the tunnel.” Rio expressed his dismay at the act of his former team mate and current Barcelona star Gerard Pique who would greet and hug his fellow countryman Cesc Fabregas before a match against Arsenal, a sight us mortals regularly see on pre-match TV coverage. “I remember Jermaine Defoe coming up to me and ask me how I was doing trying to shake my hand I would just stand there” [laughs].  “I remember Jermaine coming up to me when with England saying  “why wont you talk to me in the tunnel, I said what do you want me to do? Cuddle you? I want to go out and play and I want to kick you”

After his speech and Q+A session, Rio and I sat down in the Union bar having desperately fought off a scrum of selfie takers and junior Union hacks. I can’t deny the fact that I sat there in startled awe at first, as loads of people watched me talked to the great man “That was nerve-racking, the history, the people that have been here, I almost feel like I’ve lived up to an expectation which has been going through my mind and it’s weight off my shoulders now.”

Rio has since transitioned from being at the top of football on the pitch to taking a role at the top of broadcasting as a pundit for BT Sport. “Having to recreate yourself is a big thing. I have had to start off on from a level playing field again and I have had to prove myself again. My goal for the next phase of my life is to be recognised for something other than being a footballer. I still bring the same traits from what made me become a footballer in terms of the work ethic, desire and consistency.”

“Success for my brand would be to have something out there that people recognise as having quality and has the respect of the people in that field. My dad is a tailor so I have been around clothes all of my life. We started to see whether we could sell caps through social media, which is now a business in itself. I have had a lot of options to do lots of things, but whilst I was playing I didn’t feel I could give it the attention that it needed for me to put stuff in the shops despite having a number of big retailers asking me to provide them with a product to put in their shops.”

Rio’s former team-mate Ruud van Nistelrooy visited the Union a week later to give even further insight into the world of elite football. 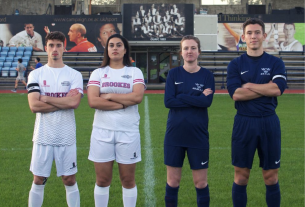