Imagine Black Mirror as written by Samuel Beckett. Dark, clever and deeply emotional, ONLIFE tells the story of one man struggling to deal with modern technology. But while it displays a lot more tech savviness and emotional depth than the average screed about those damn kids and their smartphones, ONLIFE is unfortunately marred by some iffy production choices and inconsistent writing. It’s a worthwhile experiment, and delivers some damn fine moments, but the overall impression is of a play still in beta.

The play follows the life of programmer, vlogger and all-round techie Felix (Felix Von Stumm) as he manages a messy breakup and attempts to launch his ambitious start-up, the titular ONLIFE. The entire play takes place in Felix’s flat, realised with authentic squalor by director Will Stevens, as he Skypes, sends emails and records vlogs, never directly interacting with another human being. It’s an authentic-feeling portrait of a lonely, desperate man, aided by Von Stumm’s gangling, awkward physicality. There is a sense that Felix is at odds with his world, both on and offline.

One of the play’s greatest strengths is that it clearly understands the technology it’s talking about. The scenes of Felix agonising over the wording of difficult emails will be familiar to anyone who has ever struggled getting their real intent across in the voiceless world of online chat, and Von Stumm delivers them beautifully. His sense of pathos and strong comic timing also enlivens the vlogging scenes, which are easily the highlight of the play. Narrative digressions filled with weird imagery and clever bits of wordplay, they come off like a cyberpunk version of Angela Carter, which is one of those things you don’t even know you want until you see it in motion.

But the writing overall feels uneven; in between the brilliant monologues about silicon valley and Pret a Manger there are some rather overdone one-sided conversations about Felix’s breakup, which come across as a bit ham-fisted. We don’t really get a sense of what Felix’s ex was actually like (I saw it about an hour ago and I can’t even remember her name), and Felix comes across as annoyingly self-pitying. Von Stumm visibly struggles in these scenes, and displays an unfortunate inability to act and shout at the same time. The play floats between vignettes without much regard to structure, and it doesn’t really cohere until the very end.

But once the play hits the final stretch, its limitations start to fall away, and the last ten minutes are genuinely moving. ONLIFE is a fragmentary, half-formed mess, but it’s a mess long on ambition and full of ideas. As Felix himself puts it, a broken mirror still works. 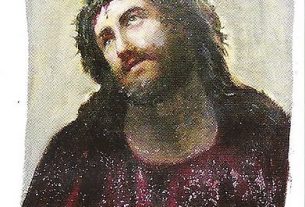