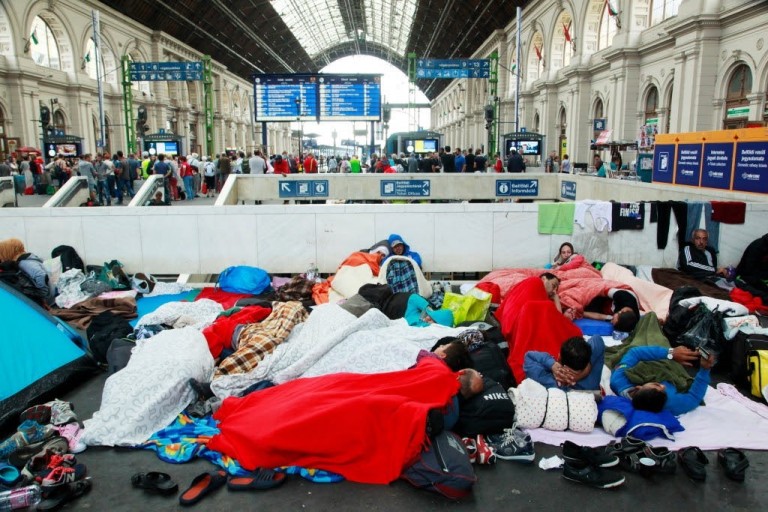 The Refugee Crisis: A Shared Responsibility

The Oresund bridge, which connects Sweden to Denmark, stretching from Malmo and Lund to Copenhagen, and which sees 20,000 crossing daily, has, for 15 years, been a monument to international cooperation, a sign of openness, a symbol of interchange between nations and cultures. Now it has become something more akin to the Berlin Wall.

On the 4th January 2016, for the first time in 50 years, a new Swedish law was implemented which will require travellers crossing the bridge to present photo ID on entering Sweden, in a bid to stop the influx of refugees, of whom 160,000 were allowed to resettle in the country last year. Sweden had previously stated that it would allow all refugees to resettle within its borders, but this new law comes after the country’s more recent statement that Sweden can no longer provide housing for all the refugees who have entered the country.

Residents of the Oresund region have objected to the new law, which has caused turmoil for both commuters and rail companies. Denmark has also reacted negatively and, fearing that it will have to deal with the refugees who can no longer gain entry into Sweden, has stepped up border controls with Germany.

This increasingly cynical attitude towards migration will make it a lot harder for refugees to find safety. The ‘odyssey’ of Syrian refugee, Hashem Alsouki, as he journeyed to Sweden, which was chronicled by Patrick Kingsley for The Guardian, would no longer be possible within the current climate – Alsouki would not be able to enter Sweden, even illegally, for fences have been erected in railway stations and airport security has been tightened. The tightening of Sweden’s borders also constitutes an exemption from the Schengen Agreement – a treaty which abolished border checks in the region. This has worrying connotations regarding the future of the European Union itself, raising fears of the collapse of the accord. Germany’s foreign minister, Frank-Walter Steinmeier, has expressed fear that one of the ‘biggest achievements for the EU in recent years’ may be overturned.  As Andreas Onnerfors put it: ‘A borderless Europe cannot be a dream reserved for time of perfect peace’.

However, if Sweden’s avowal that it can no longer cope with the number of refugees it has resettled seems disappointing, this is not so much indicative of a weakness on its own part as of a failure of other EU member states to accept their fair share of the responsibility. Sweden has taken in more asylum seekers per capita than any other European nation so far. Meanwhile, nations such as Denmark refuse to accept asylum seekers and claim to have no responsibility for solving the largest refugee crisis since World War II. While Danish migration minister Inger Stojberg has claimed that Sweden ‘have put themselves in this situation’, it is, in reality, the unwillingness of other nations that have caused the problem. To ease the refugee crisis in a sustainable way, more countries need to be willing to accept refugees.

Benjamin Teitelbaum, writing for The New York Times, called Sweden’s situation a ‘self-inflicted nightmare’,  and also criticised Sweden’s migration policy for the reason that it has already redirected 20 percent of its foreign aid budget, with plans to increase this percentage, to domestic migration agencies. He argues that Sweden is ‘shunning those abroad in greatest need’. However, again, these funds are only being redirected in order to mend an infrastructure partially crippled by the weight of a burden that could easily be shared across nations.

If any progress is to be made, an open discussion is needed to respond to the refugee crisis, not just in Sweden but across Europe and, ultimately, across the world. The EU commission into migration has begun a migrant relocation plan agreed in September, but the implementation of it has proved slow, and only a fraction of the 160,000 people it aims to resettle have actually been found homes. This needs to change. So too does the Dublin Regulation which means that refugees can be sent back to their original point of entry into Europe, which only complicates the problem, and again concentrates the responsibility for refugees on individual countries. More Intergovernmental cooperation is also needed. For example, Yvette Cooper has claimed that if France and England work together, the refugees currently living in ‘the jungle’ in Calais can be resettled – after all, the camp represents just 0.0006 percent of the French population.

One of the most pressing impediments to this progress is the negative public perception of refugees. Migrants have been demonised either as villains, as responsible for the crises from which they flee, or as being ‘healthy and wealthy enough’ to fund their own way to new countries, and therefore undeserving of our help. Even the term ‘migrants’ has come to be used in a pejorative sense. The refugee crisis is not too big to bear; as early as 2014, Eiko Thielemann, professor of migration at the London School of Economics, developed a model that allowed for refugees to be distributed across the European Union depending on each country’s infrastructure. A solution is possible, but would require countries across the EU to accept joint responsibility. However, this won’t happen until negative myths surrounding refugees are dispelled. Often, these myths arise from other countries seeing the problems faced by those such as Sweden. Yet what these countries must realise is that those negative consequences would not arise if the responsibility were fairly shared between states.

We need a concerted effort on the part of the European Union, of all European countries and, if possible, countries such as America and Canada, too, the latter of which has welcomed Syrian families recently. Manuela Bojadzijev has said that the crisis facing Europe is ‘personified by the figure of the migrant, in search of a better existence’. Europe will have its own ‘better existence’ if all the countries within the European Union work together. If we cannot learn to do so, the consequences will be dire, not only for the European Union but for the families and the children who have become refugees through no fault of their own.