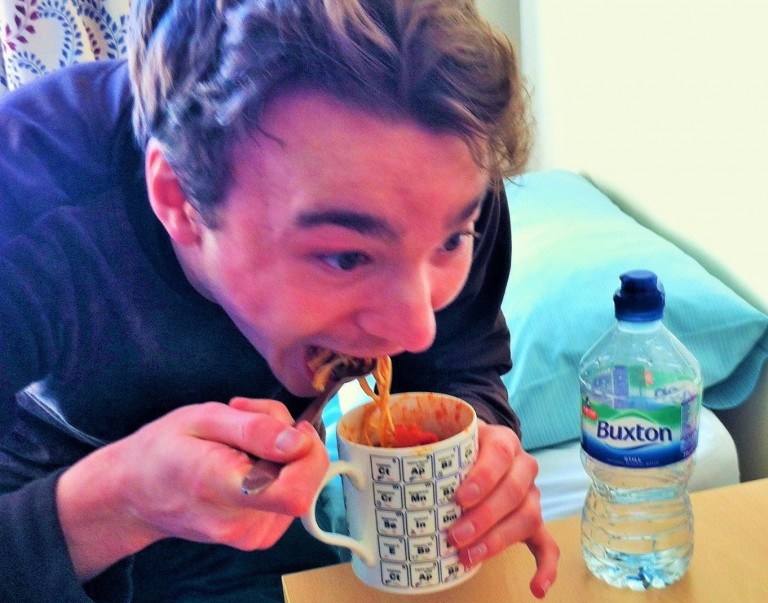 Not the most tasteful of articles

My kitchen in college measures two metres by one metre, barely enough room to swing a decent sized rodent, let alone a cat. With ten undergraduates desperate to make toast and swing cats, the situation is somewhat problematic. I, for one, can’t stand feeling chivvied when I’m chopping chives, or being kettled when I’m just trying to use the kettle.

In its appliances, at least, the kitchen encapsulates the real advances of the twenty-first century. By this I mean that there is neither hob nor cooker, both having been exposed as relics of the distant past, simpler times when folk worshipped the sun and lived in huts and let their food heat for longer than three minutes and twenty five seconds.

Alternatively, the deliberate parallel of the number of appliances which the kitchen does boast, a toaster, kettle and microwave, with the three courses of a meal could be interpreted as a kind of challenge. No stranger to a challenge, having once reached a high score of 250 on Bop It Extreme 2, I endeavoured to construct the most complex meal possible, using a different appliance for each course. Embracing the task with relish (Branston Caramelised Red Onion, in case you’re interested), I collected some mugs and then collected some more mugs, called Tom, Max and Jake (Dick and Harry being busy), who would act as food critics.  When they had grudgingly agreed to overlook the high chance of being poisoned, I was ready to begin.

The same as garlic bread you buy in a shop, except not. After dolloping some fresh garlic butter onto a few slices of crusty French bread, I used tin foil to create toaster friendly packages. Then in a very toaster unfriendly way, I rammed the packages inside the burning metal mesh with a knife. The results were electrifying.

What did the critics think?

Max, eager to represent the voice of minority groups, pointed out that the dish would be a “nightmare for vampires.”

Tom, wanting to join in the fun, plaintively wailed that “some fish sauce wouldn’t have gone amiss.”

I like Pot Noodle as much as the next person, unless the next person likes Pot Noodle. With a nest of noodles, a chew of chorizo, a splodge of passata and just a shred of basil, however, it’s possible to recreate your favourite pot based snack in the comfort of your home. Place all the ingredients in a mug and add boiling water. You could also make up some collective nouns for added fun.

Over to the critics:

Tom, with a look of surprise and suppressed fear, exclaimed “this is actually good!”

Max’s response cannot be disclosed in a respectable newspaper.

In the Microwave: Pears and that

After an initial attempt to make crumble, I was afflicted with low quality margarine. Bloody Tories. Fortunately I had the agility of mind to sprinkle the chopped pear with sugar and chocolate chips and claim that it was a novel creation. Well done me. If this inspires you, as I’m sure it will, all you need to do is fling the aforementioned ingredients in a mug and zap them for two minutes in the microwave. You’re welcome.

All other potential responses became irrelevant.

So, what did my acquaintances think about the meal which I’d so kindly cooked for them and not charged them £2.50 for?

Jake, sensing a chance to ingratiate himself with me, described it as “very, very enjoyable Robert.”

Tom, never likely to miss a food pun, said “on a scale of one to ten, I’d give you pi.”

There you have it; it is indeed possible to cook a three course meal using a toaster, kettle and microwave. It is, however, a bit time consuming, not to mention boring. Maybe have some crisps instead. Quavers are quite nice.