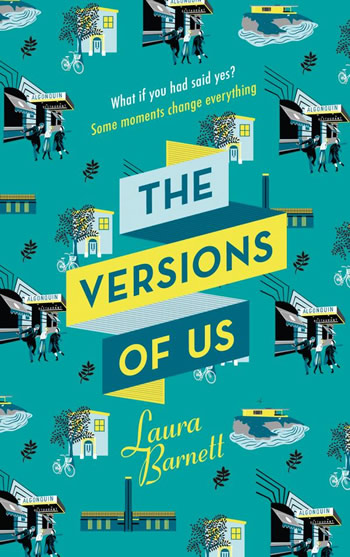 Book Review: The Versions of Us by Laura Barnett

A thought-provoking read that will resonate with many and serve as a source of comfort when it feels like everything is falling apart.

I ordered The Versions of Us instantly when I found out it was about a couple that met in their second year at Cambridge. As someone who developed an obsession with all things Oxbridge from my (somewhat extreme) yearning to attend (Cam)bridge (but obviously Ox once I came to my senses), I was automatically excited about this story. The idea of different fates reminiscent of two of my favourite films, Back to the Future and It’s a Wonderful Life, made it all the more appealing.

However, I didn’t anticipate that the book would make my mind go into such overdrive (I ploughed through the 400 pages in two days when I should have been revising for collections – sorry tutors). In short, the novel describes three possible lives of the two main characters, at times together and at times apart, all flowing from a single moment in 1958 and the subsequent events and choices that followed.

It’s easy to take this as any other love story. Sometimes you’re rooting for Jim and Eva as a couple and sometimes for just one of them as an individual. However, there is so much more depth to this novel because of how it prompts you reflect on your own life and the repercussions and possibilities that stem from your actions.

My perspective is this: there are three consecutive components that define the path your life will take. Firstly, your mere existence, depending on the choices made by your parents, grandparents, great-grandparents, et cetera. If my grandparents had emigrated to Australia in 1973 as they had intended, my parents would not have met. This is reflected in the eight different children that are born over the course of the three versions; the decisions of Eva and Jim impact the lives of their children’s would-be partners, children, et cetera – the butterfly effect. Similarly, Eva’s childhood is largely defined by the chance meeting of her mother and father on a train in Vienna in 1938.

Anyway, that’s quite morbid, so assuming you were born, you’re here and all is well, the next step is the circumstances that you end up in: your hometown, school, university, choice of career, et cetera. Personally, I view this as my place at Oxford – what if I hadn’t got in? Where would I be and what would I be studying? Even if I had got in but into a different college – who would my friends be? Would I still be as happy? Would I be happier? My life could be very similar on the surface, albeit entirely different due to the people that feature in it, and this is something that defines the novel, with various partners, lovers, colleagues, friends and acquaintances featured throughout. This is perhaps the only drawback as at times it becomes difficult to keep tabs on the three separate plot lines, with the same characters sometimes appearing in more than one.

Finally, the first three chapters of the novel are entirely based on tiny details, such as not being in a certain place at a certain time or not responding in a certain way. Had I not cried when my boyfriend had annoyed me in a JCR meeting, I probably would never have gone up to him and had a go at him the following week, which started the chain of events that led to him asking me out for a drink (and me realising he is actually not annoying). We are shown what happens if Eva doesn’t meet Jim at Cambridge in version two and how what would seem to be a tiny difference defines the majority of their lives.

I filled up pages thinking about all of this after finishing the book and had to stop myself as it approached 3am. What struck me was that although the story was confined to three versions, there are hundreds of other versions that could have been written if Barnett had decided fate should work a bit differently or if another option had been chosen. The infinite possibilities are slightly dizzying.

Among all this fate and choice there is however an element of destiny: the connection between Jim and Eva, the presence of both characters at a 30th birthday party, the character of Penelope (Eva’s best friend from Cambridge), Eva’s accomplishments as a writer and moist poignantly, the ending (which I won’t spoil). These threads of continuity demonstrate how some things are meant to be and it is this we can take solace in when our minds are going crazy at the thoughts of what could have been.

A final thing to remember is that we never know which version we are living. We can torture ourselves over the ‘what ifs?’, but the way we respond to things is a result of the circumstances that brought us to that moment. This explains why the perspective Jim has of Eva differs so greatly between and throughout the versions. Jim takes advantage of her in one version and longs for her after having lost her in another, showing people’s different responses to different circumstances. Eventually, life will work itself out in some way or another, and just because it is not what we originally visualised, does not mean it isn’t wonderful. After all, you could have simply not existed, and how bad would that be?