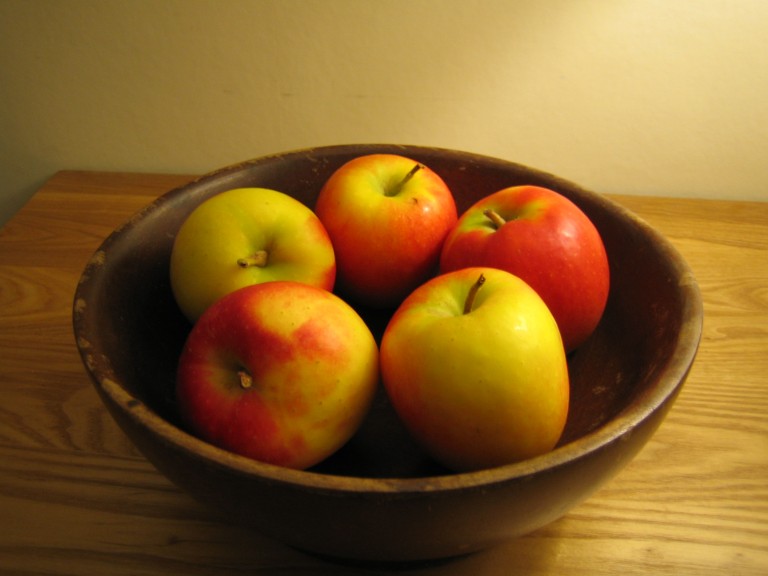 There’s a party in my mouth and only one genre of music is playing. Also no-one else is invited, that would be disgusting. Jamie Oliver’s would be the 1905 Revolution in comparison with this bona fide Bolshevik Uprising in the fruit bowl. When the Frankensteinian fruit scientists of New Zealand put a Braeburn to stud with a Royal Gala, they could not have predicted what the consequences would be.

I learned about the concept of the Jazz Apple from my brother, proving, I suppose, that the apple doesn’t fall too far from the tree. With a 75% sales increase in four years[1], the Jazz Apple fanbase has blossomed from a core of fanatics into an orchard of admirers. Perhaps only the Pink Lady presents any real resistance to the relentless march of the Jazz, but do not be deceived by her strumpet-like ways.

The erroneously named Golden Delicious, the Cox (tenuous pun intended), those big red ones that decompose in your mouth: all are pipsqueaks in comparison with the mighty Jazz. After a head of acidic crunch, the taste crescendos into sweet honey, followed by a coda redolent of those sultry New Orleans evenings in which the Jazz Apple is rooted.

The Jazz Apple phenomenon has riffed upon its successful theme. The Yarra Valley orchards in Victoria, Australia now produce a Jazz Apple cider. While some polemicists may question the efficacy of brewing a cider using apples designed for consumption, they should bear in mind the words of one reviewer: ‘Yes is [sic] does lack in tannins, but i [sic] don’t think that the Jazz Apple Cider is aimed at that end of the market’.[2]

Finally, in the context of budget cuts to NHS services, what would ministers not give to ease the workload of NHS medical professionals? As the famous adage goes, ‘An apple a day significantly reduces the need to consult a healthcare practitioner’.

Just remember to keep your Jazz Apples in the fridge. That way they stay particularly crunchy.