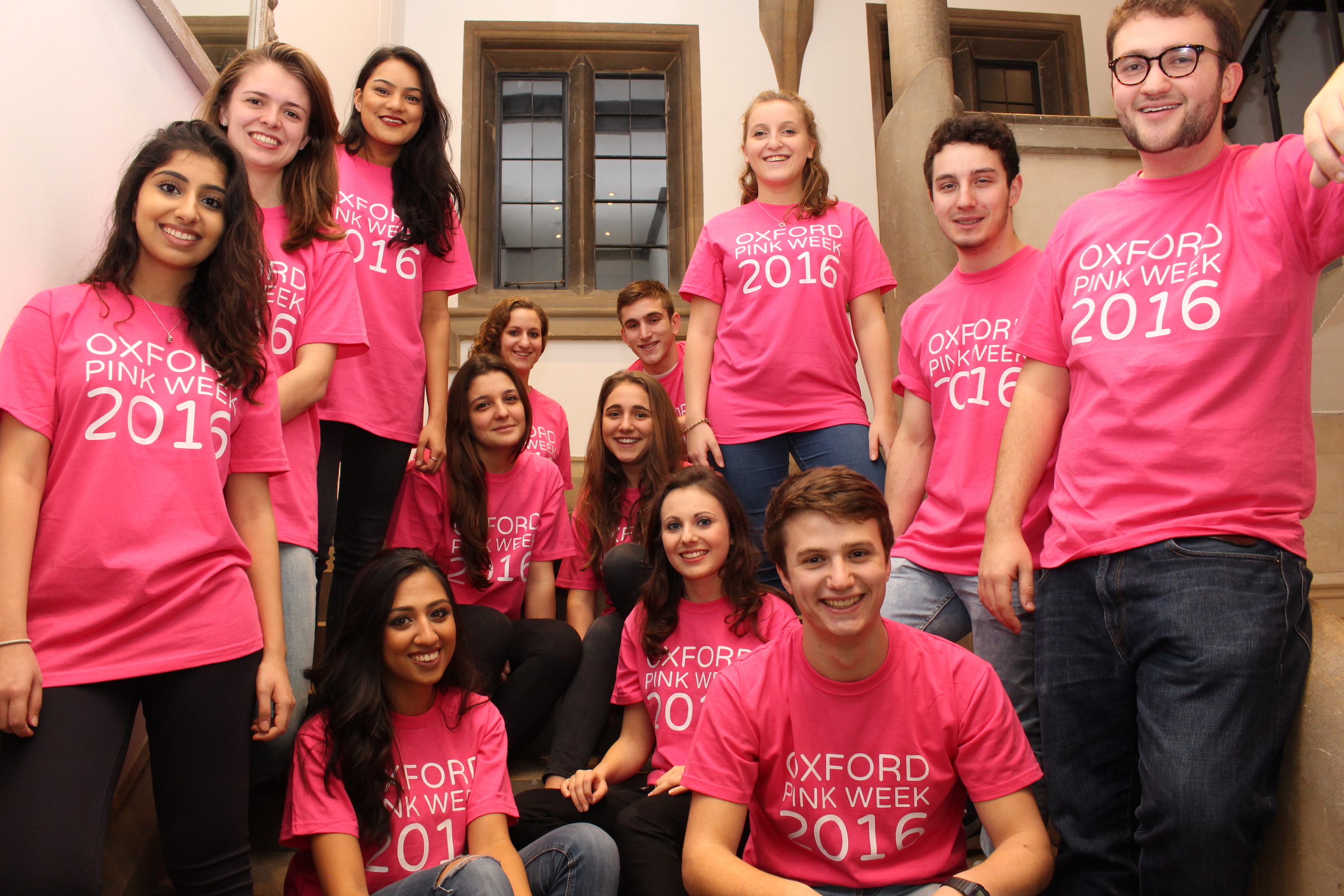 Launching at Wahoo this Friday, Pink Week is coming to Oxford. The campaign aims to raise funds and awareness for breast cancer charities. In this profile, the Pink Week team introduce Gina Sternberg, head of Pink Week at Oxford to tell us more about what the week is all about.

When was Pink Week started and why?

This is the first Pink Week we are holding in Oxford, hoping to bring the model of the highly successful Pink Weeks at Cambridge, Durham, Bristol, Birmingham and Sussex to Oxford. This UK-wide movement began at Cambridge University three years ago to raise money and awareness for breast cancer charities. Nina Rauch founded Pink Week in honor of her late mother, the Guardian columnist Dina Rabinovich. Dina fought cancer with grace and with humor, raising over £110,000 in her last years. Through Pink Week, we hope to continue to raise much-needed funds to help those who are diagnosed as well as spread awareness to both students and the wider community.

Where does the money raised go?

We have chosen to split 100% of our proceeds between three valuable causes. Pink Week, as a nation-wide initiative, raises money for Breast Cancer Care. The substantial sums raised from Pink Weeks provide much needed funds so that those diagnosed with breast cancer are provided with the best treatment, support and information. As a committee, we also decided to support two less well-known causes, each of which provide a unique approach to breast cancer awareness. Hello Beautiful run exhibits and sell artwork, with the aim of stamping out the stigma associated with Breast Cancer. Coppa Feel work across the country to prevent late detection of breast cancer. We aim to not only raise money for these causes but also increase their profile. We feel that the nuanced approaches these charities bring to raising funds and awareness for the cause, as well as developing the support network available for those affected, deserves the utmost recognition alongside more prominent charities.

Who does Pink Week involve?

Pink Week is currently held in universities across the UK and offers events for the student community alongside the wider community. Our main fundraising event is Pink Night at Freud, a ‘pink tie’ event which will feature a number of student acts, pink cocktails and other entertainment. The aim of Pink Week is not just to raise funds but also awareness. We’re putting on a series of free talks given by surgeons as well as representatives from the charities we will be supporting. We’ve also been fortunate that the wider Oxford community have reached out to us. This will include Deliveroo donating £1 for every delivery made during the week, as well as a special ice cream flavour from G&D’s.

Is pink your colour?

I personally do love pink. This question, however, feeds into the dual concerns that the committee had about Pink Week. Firstly, we, do not wish the week to be associated with any colour prescribed gender stereotypes.  When Pink Week was founded it was named as such to make use of the widely recognized pink colour which is associated with the global campaign against breast cancer. Secondly, we do not wish for the week to be a week exclusively run by females and for females. We have made a conscious effort to ensure that people of all genders can be included in our events. Moreover, we wish to raise awareness that although breast cancer is a disease that primarily affected females, it can also affect males with around 400 men being diagnosed each year.

Do you worry that ‘pinkwashing’ is an issue in relation to breast cancer awareness?

I do. As a committee we are keen not to loose touch of the reason why  we are holding the week. Pink Week’s philosophy is grounded in the severity of  the disease and the lives of the people who are affected on a daily basis by breast cancer. The week itself will, of course, be full of enthusiasm from both co-ordinators and participants, and it is this enthusiasm (manifest in the colour pink) that we hope will encourage increased awareness and support of the cause. In addition we are incredibly conscious that people may be affected by some of our events. If they wish to reach out, we will be able to put people directly in touch with  the charities or other support networks.

What could the university/ colleges do (and what do they already do) on a more regular basis to raise awareness for the breast cancer?

It has been amazing to hear that many colleges have already held charity events where money has gone towards Breast Cancer Care. I hope that in the future, the university will provide more advice about breast checking and increase awareness of the support networks that are available for those affected. During the week we are hoping to have a university-wide event where advice is provided about breast checking.

More generally, organising Pink Week has re-affirmed my belief that when the energies and imagination of students at Oxford are put behind a good cause, great results can be achieved. The committee and team of college representatives have united behind this cause and it is through all their work that this  idea of launching Pink Week in Oxford has become a reality. The support of RAG and RAG Network has also been amazing. I highly recommend that anyone who has an ideas about charitable initiatives reach out and get in touch with them.