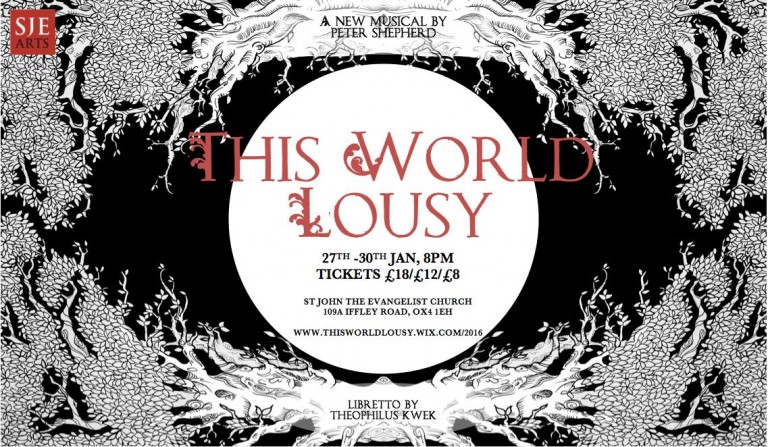 Next week, St John the Evangelist’s Church will be moonlighting as a forest. A new musical by Peter Shepherd and Theophilus Kwek, This World Lousy is a haunting and atmospheric fairy tale about a man on the run, and the various characters he meets along the way.

Mysterious, playful, and occasionally very dark, This World Lousy has some serious potential, and seems well worth checking out for any curious opera fans. In talking to me about the production, director Maya Ghose highlighted the fact that none of the characters have names. At first it seems an alienating choice, but it makes sense once we see them in motion; the production is more operatic than dramatic, and the lack of individual names lends the play an allegorical air more suited to myth than to standard issue musical storytelling. As composer Peter Shepherd told me, these characters are “meant to represent all of us”.

The plot kicks off when the Fugitive (played by Aaron King) is accused of murder, and flees into the woods to escape persecution. Over the course of the play he encounters a number of mysterious and intriguing characters, including an Orphan who nicks his wallet before striking up a conversation, and a Hermit with a shameful secret. It’s an intelligent riff on European folklore, whose major beats are as powerful and dramatic as they are touching and intimate. But what really sells This World Lousy is the music. While the orchestra at the preview were clearly a few days’ practice away from the finished product, they still managed a very impressive showing. The opening number is a grand, sweeping affair which effectively conveys the harshness of the natural world as the Fugitive ventures out into the world.

Another highlight is the scene of a brewing riot, scored with a palpable sense of rising dread, as well as a powerful catharsis when the scene reaches its inevitable conclusion. Overall, there is a sense that the music derives from the plot rather than the way round, something that can be tricky to pull off for an original composition like this, even if in the preview performance the orchestra occasionally threatened to drown out the singers.

The music is helped by a top-notch cast. Aaron King brims with leading-man charm as the Fugitive, while also managing to convincingly portray the character’s pervading sense of self-doubt. Emily Coatsworth is marvellous as the Orphan, her comedic physical performance lending her character a cheeky and playful stage presence, complemented by her superb singing voice. The rest of the cast acquitted themselves admirably, though were less prominent in the bits I saw. This World Lousy still feels like a work in progress, but its rough images belie a rock solid core. With just a few more rehearsals this has the potential to be something truly special. As things stand, this looks to be an immersive, atmospheric experience of a type you won’t see anywhere else this term.