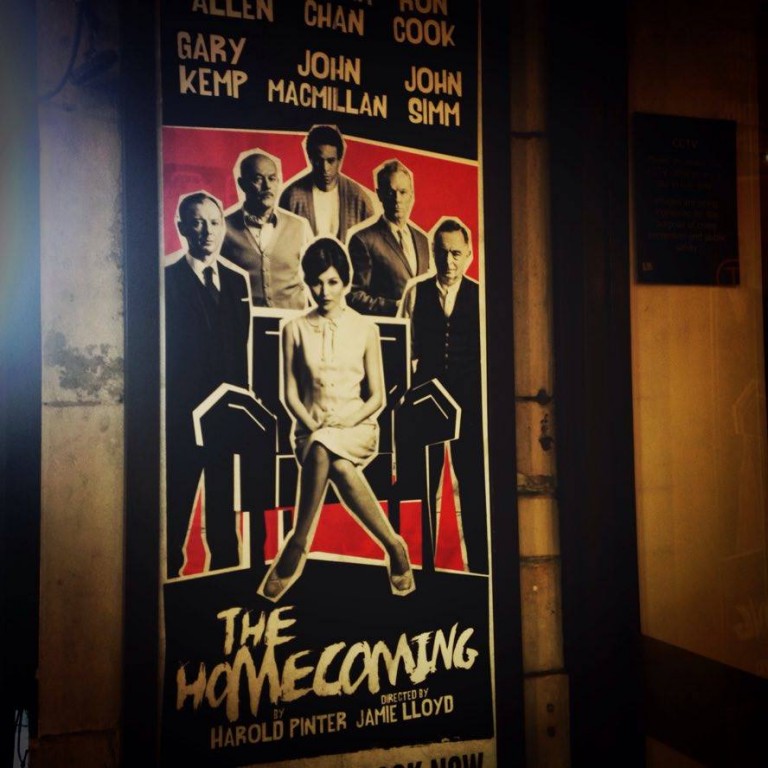 Just over 50 years ago Pinter’s The Homecoming opened at London’s Aldwych Theatre. After years of criticism for his absurdist style, this was the play that not only was considered by Pinter’s closest friends to be his best, but also finally secured his status as a celebrity playwright. This is why director Jamie Lloyd is reviving the Nobel prize-winner’s 13th play at Trafalgar Studios in London, till the 13th of February.

Set in the cigarette-fumed North London house of 70-year-old Max the play presents a coarse and vulgar working-class family, each member fighting to be at the top of the pecking order. To complicate this power-struggle further, estranged son and academic Teddy returns from America with his wife, Ruth. Ruth feels too much at home in Max’s house for Teddy’s liking; what ensues shocks and disturbs both Teddy and the audience.

The script is a masterpiece. Behind each story the characters tell, lies a force, an attack to bring down their rivals in the family hierarchy. It is a comedy of menace, a play that as Lloyd puts it, “crawls under your skin” but makes you laugh in equal measure; it is as repellent and sad as it is funny.

Lloyd’s production is an extremely powerful one, and I highly recommend you all jump on the Oxford Tube to go see it. He compared his presentation of Pinter’s play to Stanley Kubrick’s style of direction. But there was also something almost Tarantinoesque about it: as the characters made their entrance in Act II, smoking in sync and looking badass, the opening of Resevoir Dogs came to mind. It was extremely atmospheric as red lights, dramatic sound-effects, and the smoke of smoke machines and cigarettes melded beautifully with the script. It’s easy to overdo it with special effects in a play as raw and language-driven as The Homecoming, but Lloyd does not fall into this trap. This was a refreshing new aesthetic applied to Pinter as most productions including the classic 1973 Peter Hall film, tend to present the play as naturalistically as possible.

However, I felt let down in that Ruth’s character (despite Gemma Chan’s obvious talent) was presented by Lloyd as so emotionally vulnerable. In the beginning she was nervous, gasping for air and near the end was breaking down in tears. This is very different from the way Vivien Merchant (Pinter’s first wife) played the role – she was cold, composed, the most powerful character on stage. Because it is important to be surprised and confused by Ruth’s behaviour in the way we are by Merchant; she’s not a victim who simply stepped into the wrong house – she’s somehow destined to take it over.

The problem with Ruth’s presentation stems from Lloyd’s more general attempts to show the audience what the characters were truly feeling. At various points the characters would freeze to allow for one character to cry or scream. Though this was executed brilliantly and would have been stylistically wonderful in any other play, I feel that there is a reason the Lincoln Center Festival’s celebration of Pinter’s works was called “The Spaces Between the Words”: the spaces left by Pinter’s ambiguity, absurdity and constant use of ellipses in his works do not need to be filled.

But I cannot urge you to go see this play enough, if only to see Ron Cook’s unmissable performance as Max. Bound to blow you away, he perfects the effect Max is meant to have on the audience: he is amusing, repellent, and as observably vulnerable as he needs to be. It’s as if he was born for this role.