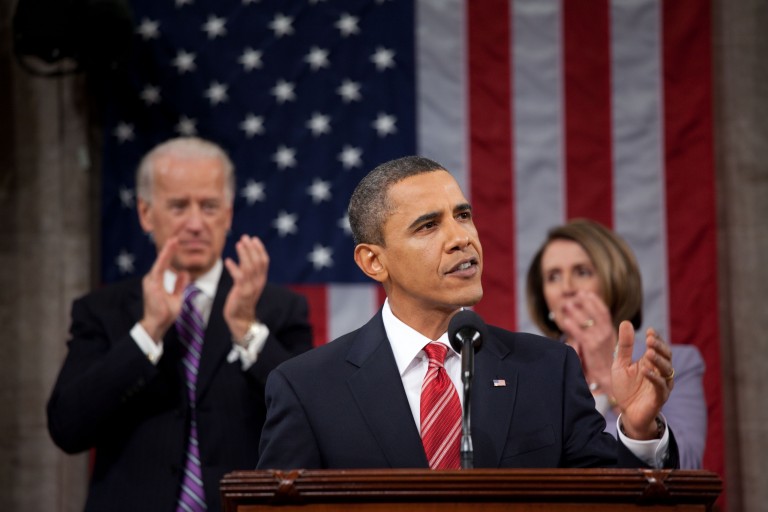 President Barack Obama gives his State of the Union address to a joint session of Congress in the House Chamber of the U.S. Capitol, Jan. 27, 2010. (Official White House Photo by Pete Souza) This official White House photograph is being made available only for publication by news organizations and/or for personal use printing by the subject(s) of the photograph. The photograph may not be manipulated in any way and may not be used in commercial or political materials, advertisements, emails, products, promotions that in any way suggests approval or endorsement of the President, the First Family, or the White House.
Comment
·25th January 2016

America must not resist change

On January 12, Obama found himself for the last time delivering the State of the Union Address. Throughout the speech the President talked about the economic recovery, the Affordable Care Act, climate change and America’s standing in the world. But most importantly he talked about the future of the United States, In not so many words his speech was a plea for the American people to question what they envision America to be and what being American will mean in the future.

His speech summarized what the 2016 US Presidential election will be about: a referendum on American national identity.

The President is right. The United States is facing a period of change where uncertainty looms over its security and the place it has in the world. China, despite its current economic turmoil seem to become stronger and stronger. Technology is changing our way of life and inequality seems to be growing instead of shrinking. The President calls for unity in the face of change and for America to overcome the fear of change.

That unity has been long gone and it is exemplified by how little Republicans clapped even when the President made valid points that could be supported by all in his speech. It seemed that Republicans found little truth in anything the President says, even when he has facts to back him up.

Republicans may claim that the current state of affairs is caused  — at least on their side — by Donald Trump, the billionaire turned politician who argues with braggadocio that he will make America great again. Yes, he has insulted Mexicans by stating that they’re all rapist, Muslims by proposing to register them despite the fact that this might be unconstitutional. His offenses are many more but he is not the only one making such outrageous statements. What differentiates him from his opponents is that he does not speak in code to appear politically correct. He insults, he shouts and the Republican base applauds.

All of this is symptomatic of a polarization so extreme that it may remind some of the polarization in  the 1850s that led to the American Civil War after Lincoln’s election. It is so bad that people affiliated with the Republican or Democratic party believe that their counterparts may lead the country to ruin.

“… Democracy does require basic bonds of trust between its citizens. It doesn’t work if we think the people who disagree with us are all motivated by malice. It doesn’t work if we think that our political opponents are unpatriotic or trying to weaken America.”  Those basic bonds of trust have been broken. The country now finds itself with  Democrats looking in one direction and actively trying to be as inclusive as possible, and with the Republicans hoping to go back to the 1950s as they have been doing since Nixon decided to go after the South.

This is the real problem. America finds itself at a crossroad. It can decide to look back and resist change or it can decide to ride the wave to success and emerge as a stronger and more respected global power as a result. It can decide to lash out against the world and to target “people because of race or religion” and therefore betray its values, or it can show the world how open and diverse it can be. There is little room for compromise when the two options available are so different.

“We did not, in the words of Lincoln, adhere to the ‘dogmas of the quiet past’” said Obama when talking about other instances where America found itself confronted with change.  Coming November Americans will have to decide which side to take in what looks more and more like a tribal conflict. They will have to vote on a referendum on American national identity. History teaches us that the ways of the past tend to lose out — whether they like it or not —  by the forces of change. The past ways lost the battle when Jim Crow laws were overturned in the 1960s. They lost again when women fought for their rights and more recently when the Supreme Court struck down DOMA. Republicans are likely fighting a losing battle. Some will argue that they might loose this upcoming election and position themselves on the right side of change. This would lead to a less polarized nation and for the restoration of unity within the Union. But politicians have short memories as the doubts the party had about itself after Romney’s defeat in 2012 were quickly forgotten when the Presidential election cycle started.

Obama may be optimistic about the future. I am certain history will be this time on the side of the Democrats as it happened to be on the side of Republicans in the nineteenth19th century. But for the polarization to end the Republican party will need to be so drastically defeated that the only way for them to survive would be to become champions of change forward, not backwards.

Until then I hope the Democrats will continue to win the White House.