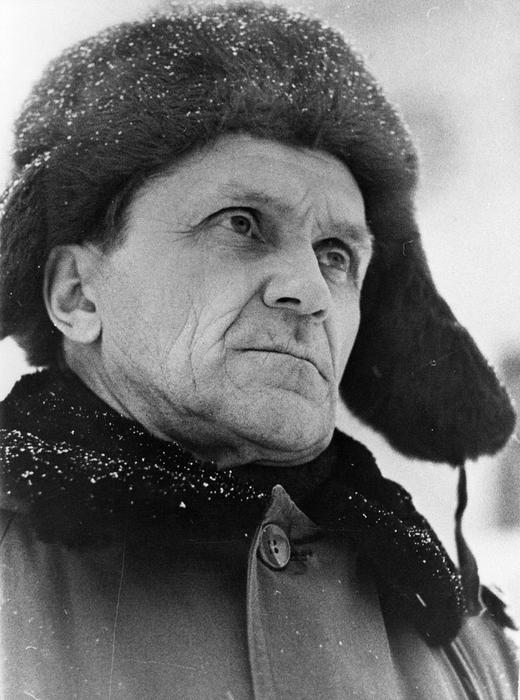 Short Story: The Berth of Hell by Varlam Shalamov

Varlam Shalamov (1907-1982) is probably the best-known Gulag writer after Solzhenitsyn, spending twelve years in labour camps. He wrote lots of short stories about his experiences. This one is from his collection The Resurrection of the Larch, and describes his arrival at a remote prison camp.

The heavy doors of the hold opened before us, and we slowly ascended the narrow iron stairs, one by one, to the deck. The guards were arranged in a thick line along the railing at the stern of the steamboat, rifles aimed at us. But no one paid any attention to them. Someone shouted, “Hurry, hurry.” The crowd pushed around like on any station platform. The way ahead was only visible to the one at the front – along the rifles to the wide ramp onto the barge, and from the barge by another ladder to the ground. Our voyage had finished. Twelve thousand people had been brought along on our ship, and until they were discharged there was time to look around.

After the hot, autumnally sunny days in Vladivostok, after the pure colours of the far-eastern sky at sunset – immaculate and bright, without halftones and transitions, remembered for a lifetime…

Cold, drizzling rain fell across the dark, off-white, monochromatic sky. Bare, treeless, greenish stone mounds stood right in front of us, and in the clearings between them at their very feet curled shaggy, dirty grey, broken clouds. They covered this dark, mountainous region like the shreds of a huge blanket. I remember well: I was quite calm, ready for anything, but my heart was hammering and clenching involuntarily. And, looking away, I thought – we were brought here to die.

My jacket slowly got wet. I sat on my suitcase, which, by my eternal human vanity, I had seized from my house during my arrest. We all had our things: suitcases, backpacks, folding blankets… Much later, I realised that the perfect outfit for a prisoner was a small canvas sack with a wooden spoon in it. Everything else, be it a pencil stub or a blanket, only hinders you. We learned to hold everything in contempt, even personal belongings.

I looked at the steamship clinging to the pier, so small and swaying in the grey, dark waves.

The dark silhouettes of rocks surrounding the Nagaevo bay stood out through the grey mesh of rain, and only there, from where the ship had come, could the endless, bumpy ocean be seen, like a great beast, lying against the shore, sighing heavily, with the wind ruffling its fur, damp from the scaly waves, shining in the rain.

It was cold and scary. The hot autumnal brightness of the colours of sunny Vladivostok remained somewhere out there, in another, real world. The world here was unfriendly and gloomy.

There were no residential buildings anywhere in sight. The only road, enveloping the hill, went away upwards somewhere.

Finally the unloading was completed. It was already dusk, and the unit slowly moved into the mountains. Nobody asked anyone anything. A crowd of wet people crawled along the road, often stopping to rest. The suitcases became too heavy, their clothes wet.

Two turns in the road, and then next to us, on the ledge of the hill overhead, we saw rows of barbed wire. People were pressed against the wire from the inside. They were shouting something, and suddenly loaves of bread flew at us. The bread was thrown over the wire, we caught it, broke it and shared it out. Behind us lay months of prison, forty-five days of train journeys and five days at sea. We were all hungry. No one had been given money for the trip. The bread was eaten greedily. One lucky man, caching the bread, shared it between everyone who wanted it, showing a nobility from which we permanently lost the habit three weeks later.

We were all led further along, higher up. The rest stops became more frequent. And there were the wooden gates, barbed wire, and within it rows of rain-darkened canvas tents – white and light green, enormous. We were divided up, filling one tent after another. The tents had a wooden double-decker bunk-bed system – one bunk for eight people. Everyone took their place. The canvas leaked and there were puddles on the floor and benches, but I was so tired (and everyone was as tired as I was – from the rain, the atmosphere, the transport, soaked clothes, suitcases) that, curling up somehow, not even thinking about getting my clothes dry, or indeed where to dry them, I lay down and fell asleep. It was dark and cold.