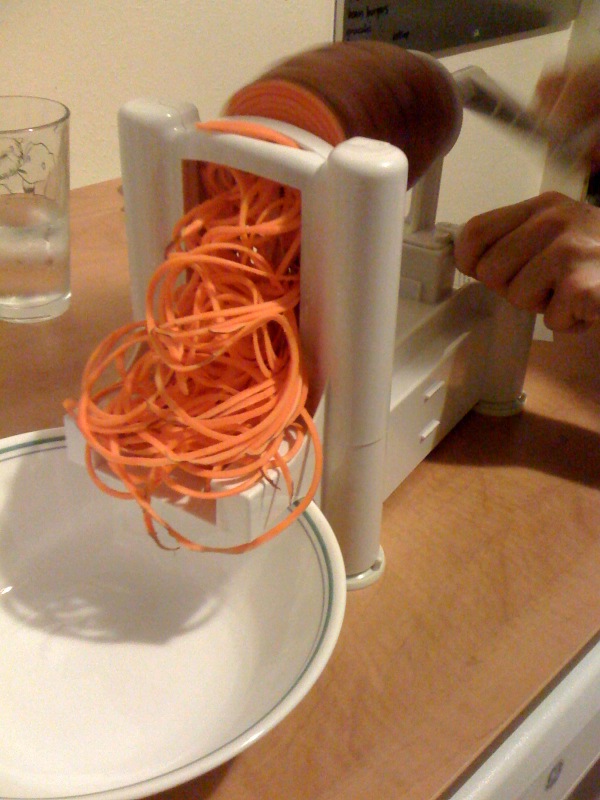 Spiralizing out of control? The new craze for replacing carbs with vegetables

Broccoli Couscous, Courgetti, Carrot Pasta, Cauliflower Rice… are these new, indie bands playing at Cellar? Code names for rugby? No, these terms define the new fad for replacing heavy carb staples such as pasta and couscous… with vegetables. Advanced notice: I also apologise for the overload of spiralizing puns in this article, terrible really.

How does one spiralize?

Spiralizing involves using a Spiralizer (surprise surprise) to divide vegetables up into spaghetti-like swirls. The technique has been around for a while, being a common method used in raw food, vegan, gluten free and paleo diets (which involves eating raw, unrefined foods like our cavemen ancestors did). But suddenly, all the big names of cookery such as blogger Ella Woodward (Deliciously Ella) and chef Jamie Oliver are latching on and telling us to chuck out that penne and move on to the greater good of carrots and cauliflower.

Should I a-spiral to this?

It’s January, the post-Christmas time of diet books and gym memberships. As far as I’m concerned, the best New-Year’s Resolutions always come in a hidden form. So, by buying vegetables dressed up as spaghetti or rice, it’s possible to be healthy without realizing it. The more disguised that gym workout can be (i.e., taking the stairs instead of the lift), or the more effortlessly you can become more cultured (watching the BBC adaptation of War and Peace rather than reading the 1,225 page book) the less torturous the process is. Even if you’re not planning a New Year’s detox, spiralizing gives you an excuse to eat some vegetables. Let’s be honest, unless forced to in hall, it is easy to forget to eat that elusive 5 a day. No, the chilli in the sauce at Hassan’s really doesn’t count.

No doubt about it, spiralize vegetables could be your superfood in shining armour. A bowl of Courgetti contains a tiny 30 calories per portion, compared to standard pasta with 580 calories, plus packs in far more vitamins and minerals along the way. Also, it actually tastes good, with a comparable texture to pasta… you basically won’t realize you’re eating your childhood vegetable arch nemesis.

Is there a chance of a downwards spiral?

As with most food fads, there are some downsides. Perhaps most importantly, spiralized vegetables (in my opinion) lack the satisfaction of normal pasta. Yes, Courgetti is only 30 calories a bowl, but the lack of carbs can simply lead to unhealthy eating habits. Maybe that was just my problem, but 30 minutes after my health craze of carrot spaghetti and tomato sauce, the magic was broken with 4 custard creams and Yazoo… in future, I’ll just keep some kale on hand to while away the hunger pangs…

I’ve been in-spiraled; how do I get involved?

Surprisingly, this is a health food that is actually accessible to the pitiful student budget, unlike those financially unreachable quinoa-granola-walnut-pomegranate salads that would deny you a mid-week night out in Park End. Tesco has it online. M & S does it, too, for those who are feeling confident about the abilities of their student loan. If you wish to DIY, vegetable Spiralizers are available via Amazon or Argos, although it is quite a large piece of kit to lug up every 8 weeks. So really a potato peeler will do. You’ll even get in a nice arm workout from it, too.