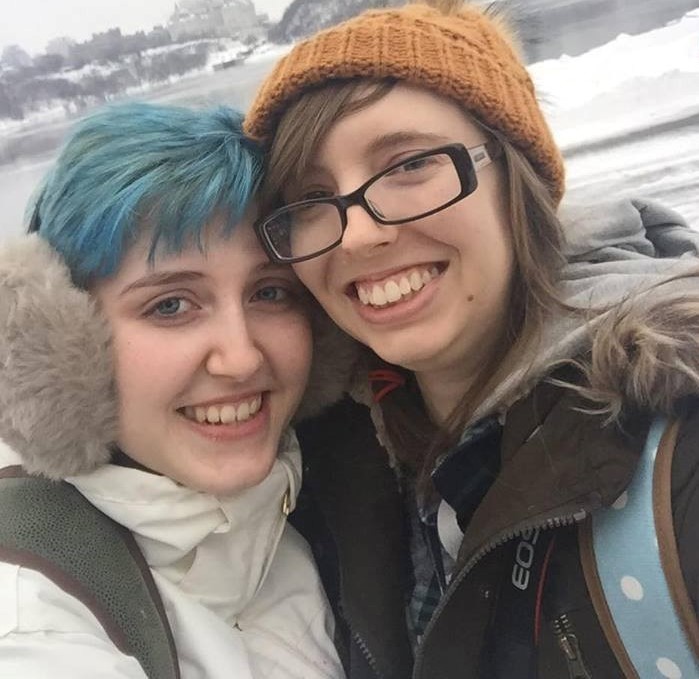 On 28th December 2015 I boarded a plane to Montreal, Canada. I was about to travel 3300 miles to meet my girlfriend of six months for the first time.

I met Keri in a fandom for a video game called Life Is Strange. I had never met anyone I got along with so well before. Within a month we were talking – typing – to each other for hours a day. I felt completely open with her, we had conversations about everything from depression to cat farts.

I spent the first two months of our relationship holding onto pessimism. I expected it to end: it was my first romantic relationship; those never last. Nothing lasts. I was afraid to think about the future in any aspect of my life, I lived week by week because the future was too murky to imagine. There was no point, anything could happen.But slowly, that changed. Keri became my best friend, the label of girlfriend wasn’t even necessary for me – that was just another aspect of our friendship. She helped me to be truly happy for the first time in a long time and I helped her. We know everything about each other.

I finally started to imagine the future again and so, weeks before I began at Oxford, I booked a plane ticket for December.

At 3.30pm EST and 8.30pm GMT I arrived in Canada, alone and stepping off a plane for the first time since I was ten years old. I was about to physically meet the girl I had spent so much time with through instant messages and Skype. Although I had cried (many times) imagining this moment, I had already warned Keri that my feelings might not translate into the actual event. And I was right. I saw Keri and she grinned and hugged me and was so happy but I felt nothing except sick and dehydrated. We drove into the night for two hours to reach her home in Ottawa, Ontario, and I wondered if I would be cursed to only love her in writing, the only world where I felt 100% myself. In the physical world I felt like a reduced person defined by my severe shyness and a stranger to Keri. When her friend, who was driving, parked the car I opened the door to the night air and was immediately sick in the snow.

In her house I recovered from the travel sickness. Overnight it had snowed and was still snowing when we went out in the morning. 20 centimetres settled but people were still driving as if it was rain. We spent the day holding hands and I felt myself warming up to Keri all over again. I tried my first root beer: it tastes of Pepto-Bismol. I will never drink it again.

The next day we went to the Canadian Museum of History on the Quebec side of the river. From the window we could see the parliament buildings; they looked like a Disney castle: turquoise roofs on top of a snow-covered hill against the water. But when we actually visited them days later the weather had dropped to -10 degrees Celsius and so their greatest attraction turned out to be the heated toilets.

In the museum I tried a BeaverTail. Contrary to the name, it is a deep-fried piece of dough with various sweet toppings. Both it and poutine, Canada’s famous chips with cheese curds and gravy, had my definite approval, unlike the root beer.

I burst into tears on New Year’s Eve, knowing that we only had a week left. It had taken three days but my love for Keri had finally caught up with me in Canada.We spent every moment together. A highlight of my trip turned out to be visiting the Ottawa Humane Society twice, similar to the RSPCA, where I fell in love again. This time it was with a 13 year-old cat named Fifa who fell asleep on my lap. We named the snowcat we built after him.

My final day was heart-breaking. Before arriving, I had focused on getting to Canada, not leaving it. I cried about six times that day and later at the airport my dread of leaving made me sick again. My flight wasn’t until 9.50pm and so we spent the day trying to distract ourselves. I took photos in the field by her house: the last few days of my trip were beautifully sunny and the snow hadn’t melted. In the ten days I was in Canada, I took 992 photos. Being thousands of miles and five hours’ time difference away from each other again, we still miss each other – even though we talk every day. We’re hoping to see each other again in April but realistically it may not be until the summer. I can’t imagine us ever running out of things to say to each other but if we do break up in the future it won’t be because of the distance. Although living so far apart has its difficulties, we get to experience new things and it doesn’t make us want to give up.