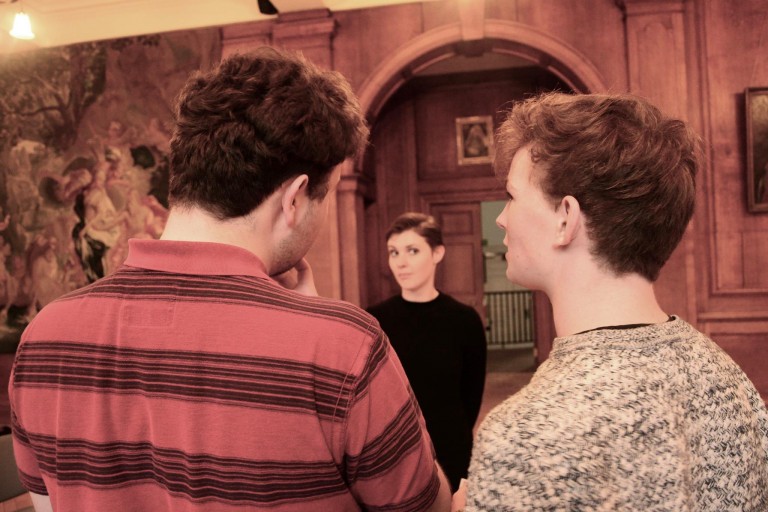 Farces are perhaps the hardest of all plays to perform successfully; how does a cast and director balance comic timing, ridiculous lines and quick interchanges while making the script intelligible and, most importantly, funny? Thark, Ben Travers’ play from the 1920s, poses just these challenges to director Jack Bradfield and his 10-strong cast, but luckily, in the preview I was treated to this week, it seemed as if all the elements of an entertaining night out are definitely coming together.

Now, as to the plot, I barely understood any of it, but then I did only see scenes from the later end of the play. With an uncle and nephew combo that reminded me of Bryn and Jason from Gavin and Stacey, and a pair of lovebirds reminiscent of Chris and Allison from Miranda, the cast interact well together, an essential ingredient for a successful farce.

The scenes I saw had some brilliant moments of comic interchange between the actors, with the first scene of Act 2 as a particular highlight; especially since I got the chance to read one of the parts (luckily a character who had no idea what was going on). To be honest, I enjoyed this so much, I couldn’t help thinking it was a shame this wasn’t going to be a participatory production when it is actually staged! That being said, the way the staging was explained to me makes it sound as if it will be just a little bit interactive, and definitely interesting. The audience will be seated in the round, with actors coming in from anywhere at any time, bits of the eponymous house, Thark, in amongst the audience, and what was described as a “casual jazz trio”. What more could you want?!

As for the cast themselves, all seem more than capable of taking on the difficult script, and mining it for as many jokes as possible. On occasion the stereotypically posh English accents threaten to make the lines a little hard to hear, but Bradfield pointed this out immediately, so it looks like that will be completely sorted by first night. Two cast members in particular stood out; Barney Shekleton as nephew Ronny, a Sebastian-from-Brideshead Revisited-type immature posh boy, complete with teddy bear, and George Fforde as one of the funniest creepy servants I’ve ever seen, Jones (his rather more unusual real name is revealed as the play goes on). Seamus Lavan was oddly touching as the put-upon servant Hook, and Niamh Simpson made an imperious Mrs Benbow, with Adam Cameron Diaper as an amusing Hector, her womanising, domineering husband. Amy Perkis played Kitty (Ronny’s fiancée) as a woman who could stand on her own two feet, and Maddie Pollard and Ryan Lea as Cherry Buck and Lionel Frush respectively were a comically endearing pair.

This, then, promises to be a really fun evening out; one where you can forget about any essay crises or problem sheet emergencies and just have a good laugh. What more could you want?

Thark, a Poltergeist Theatre Production, written by Ben Travers and adapted by Clive Francis, is on at the Michael Pilch Studio, from Feb 3-6th at 7.30pm.