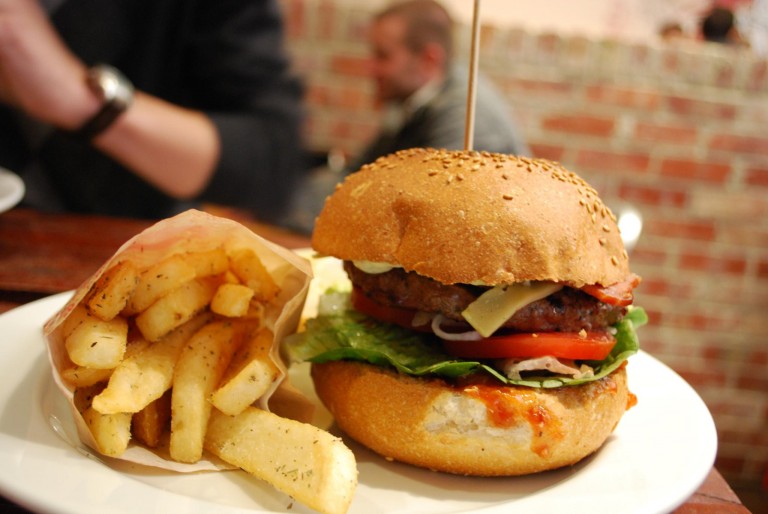 Unbeknownst to most students, there are other places to eat in Oxford besides the glorious kebab vans dotted around the city, those hallowed places of drunken pilgrimage. In the unlikely scenario that you have some money spare, and are not deep-sea diving into your overdraft, Oxford offers an embarrassment of culinary riches, for anyone anywhere on any spectrum, from the paifnully sober to the dizzyingly drunk, the edgy to the mainstream, the junk-lovers to the gourmands. To aid you in your culinary explorations, dear reader, I present to you a survey of some of the best places to eat in Oxford, seasoned with the truth and wisdom only a jaded third year can convey.

ATS (Alternative Tuck Shop – Holywell Street)
Hidden away on Holywell Street, opposite New College, this is a godsend for hungry students. Speedy, easy, friendly, they offer a smorgasbord of paninis, bagels, baguettes and ciabattas (tomato and spinach), with a delicious array of fillings. Sadly shut on weekends.

Taylors (High Street and Woodstock Road)
Lurking at the Magdalen end of the High Street, this offers a bit more of a corporate take on the Oxford sandwich scene, but still has its charms. I recommend the hot flatbreads, especially the mozzarella and pancetta one.

Olives (High Street)
This is the one, the one and only. Nestling amidst touristy tat and tobacco, opposite Exam Schools, this is the crème de la crème of Oxford sandwiches.The bread (especially their baguettes) is a large part of what makes them special – it tastes of wholesomeness and authenticity. Be as inventive as you like with ingredients – somehow the bread just makes it work. They also have a fabulous range of ingredients – pasta, jams, etc. – on offer, if you’re not on a budget. The perfect post-lecture munch.

GBK (George Street)
I’m going to start sounding dangerously mainstream here, but this Antipodean chain’s George Street outpost is a stone-cold classic. The burgers simply ooze flavour, swaddled in their luxuriant brioche buns – try the Don, the Avocado and Bacon, or the Mighty, and you’ll see what I mean as the taste wraps you in its cocoon of succulent fantasy. The chips, whether you go for chunky, matchstick, or sweet potato, are perfectly calibrated creations; garlic, chilli, and bacon mayo add their own frissons of delight. Of course, GBK ain’t cheap, but with the app, you can actually make some surprising savings. I’m still praying that they’ll resurrect the two burgers for £10 deal from 2014….

Atomic Burger (Stockmore Street)
Here’s an edgier counterpart to GBK, for all those consigned to the wastelands of Cowley, like me. The burgers are fantastic, but what this place is really about is the experience. It’s like being in some kind of hyperactive shrine to American nerd culture, with a menu where the burgers are superheroes (or supervillains), walls covered in lurid stickers from Comic-con, and glass cabinets full of toys and action figures and Star Wars memorabilia. Tastes like imagination and innocence. Gets fully booked prety quickly though – Atomic Pizza further down Cowley road has the same menu and vibe.

Pret (Cornmarket)
A bastion of bourgeois culinary sensibilities, this one. I’ve always thought it a testament to how bourgeois Oxford really is that there’s a Pret at both ends of Cornmarket (bad luck radical socialists…). Still, they do delicious food and ethical practices, maintaining the admirable policy of giving their left-over sandwiches to the homeless, so I love ‘em. We’ll just try and forget about how they’re owned by MacDonalds…

Nandos (George Street)
Catapulted to even greater fame by some inexplicable connection with the virtuoso flautist we all know and revere (Azeem be praised), Nando’s has long been beloved for its policy of refillable drinks and frozen yoghurt, and remains a ripe target for hungry and exploitative students. Just remember – all the cheeky, all the time.

Zizzi (George Street)
With elements of Pizza Express, Ask, and something distinctively its own, this funky Italian restaurant just feels cool. If I had to decribe it, I’d say it had the quality of extra virgin olive oil. Versatile too – a lovely place to take a friend, parent, or significant other.

Itsu (Cornmarket)
Perfect for anyone who likes clean eating, they offer high-calibre sushi and hot noodle dishes (‘hotsu potsu’), among others. You’re guaranteed to feel good and fresh after you eat at Itsu. Of course, it’s not cheap, but they start selling all the fresh stuff that has to go half-price from 21:30 onwards, so get there a bit before then and you can make some mad savings.

Noodle Nation (Gloucester Green)
Excellent Chinese restaurant, of which there are surprisingly few in central Oxford (more in Cowley). Well worth a go; they also do takeaways.

MacDonalds (Cornmarket)
Mainstream again, but this is a safe bet when you’re sleepless and hungry at 3AM. My policy is to get the 20-nugget sharebox, and then vehemently refuse to share it (Joey doesn’t share FOOD!). Also get the chips – for all of Maccys’ other faults., their chips live up to an almost Platonic standard of culinary excellence.

Hassan’s (Broad Street)
Poised on the corner of Turl and Broad Street to snap up any hapless (read: bevved) wayfarers through the twilight of the dreaming spires, this wondrous white van offers a whole host of delights. If you haven’t already, you will soon come to feel a great fondness for the oily chips sizzling away in their oily jacuzzi, for the mysterious but delicious leg of doner meat rotating hypnotically on its spit, and for the stalwart men themselves. For similar delights in other locations (though I will always be loyal to Hassan’s, try Achmed’s, Ali’s, and the High Street Grilled Van). Has the added benefit of being one of the most prominent meeting-places of the inebriated hordes – up there with Park End on a Shark Tales night.

Express Pizza (Gloucester Green)
The subject of minor scandal, when it transpired that their ‘pepperoni’ was in fact processed turkey meat, this little-known pizza van on Gloucester Green is basically like Dominoes, but better and at a much much more reasonable price. And they deliver. Win.

Kebab Kid (unknown location in Cowley)
Buried in the depths of Cowley, this cavern of kebabs and chicken can match any KFC rip-off, whether it be ‘What a Chicken!’, “Favourite Chicken’, or ‘Chicken Surprise’.

That concludes our roundup: in future weeks we will be covering the delights of the Gloucester Green market and the Covered Market.