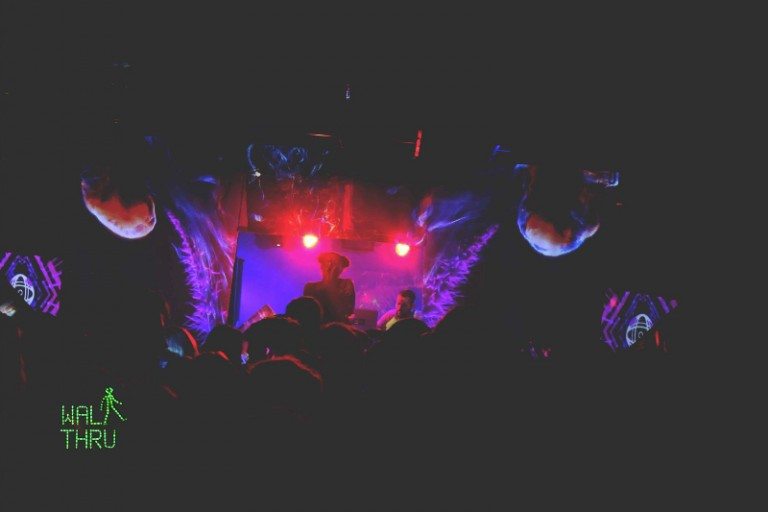 After another success at The Bullingdon in November last year, creative community Keep Hush are returning to Oxford on 4th February for another of their immersive Walk. Thru nights. Keep Hush founder Fred Conybeare-Cross describes how the concept came about, and what makes it unique within Oxford’s nightlife: “I studied fine art at university and spent most of my time making words that alter space using light, sound and installations together. Naturally the audience become immersed in these works when walking through the environments created. The name Walk. Thru was born. As you tell by our website – I am also greatly interested in electronic music. Creating a fun take on immersion with electronic music seemed a great idea. There wasn’t a whole lot going on in Oxford in terms of nights that combined visual production and good music”.

Although growing in popularity, immersive events are still an alien concept to many; perhaps still wrongly perceived as the preserve of an elitist avant-garde. When asked to describe Keep Hush’s take on an ‘immersive experience’, and how that differs from a standard club night he replied, “the club is an ideal place to have an immersive experience – there are lights beaming everywhere and music blaring in your ears. Combined with lots of visual décor and set around a theme, you can really feel miles away from your average club night. So for us this is more about creating a unique and fun clubbing experience where we can get creative and transform the club to a theme”. Given the recent issues of queueing and overcrowding in Cellar, any night that promises a degree of escapism is refreshing. He continues, “our team of creative and student artists will make installations and projections in the weeks leading up to the event and then install them on the day. We put everything in to making sure the venue is completely altered. The music is equally as important to us – we don’t stick to one genre in these events so expect everything from dub to techno”.

There is, however, still something new for those returning to the Keep Hush event: “This time we are going to be focusing on making installations that relate to the Carnival theme. We have some really exciting ideas in the pipeline – for example we have The Oxford Experimental Theatre Club involved, bringing actors on the night. The music will also be different this time – think dub, ragga jungle and reggae”.

I asked if he could elaborate on the musicians that will feature on the night and how they will fit into the Carnival theme: “Benny Page is someone that we’ve admired for a long time – he burst onto the scene more than 10 years ago and was an innovator of ragga drum and bass music.  Just listen to ‘Turn Down the Lights’, he really put a twist on classic Carnival music.  He’s been doing his thing for years, working with the massive Digital Soundboy, repping the sound system culture that we love so much at Keep Hush.  Needless to say, he’s a perfect fit for a Carnival night.  Dub Smugglers and Kuntri Ranks are a much more classic reggae/dub outfit, their style is very much at the roots of the Carnival sound.  It’s all about the good vibes, Carnival style for this one”.

One of the main criticisms facing immersive projects is that they are often found to be unconvincing. For example, projects involving actors rely on their steadfast, unfaltering performance. When asked how Keep Hush respond to these difficulties, Conybeare-Cross said, “this isn’t the kind of immersive experience you’d expect from a contemporary art gallery or something. It’s a combination of an immersive environment, with good, well mixed music.  Partying with like-minded people is immersive, having a 16-year old spill a Jägerbomb down your t-shirt isn’t.  Hearing great music mixed well is immersive, going to the smoking area because the DJ is playing House Every Weekend for the second time isn’t.  Overall we don’t want to take this part too seriously… It’s about being at a proper party, where a lot of effort has gone into the surroundings and making sure everyone has a good time.”

Walk. Thru’s venue remains shrouded in mystery until the day of the event. As recent student club nights in Oxford have demonstrated, venues – and their suitability particularly in terms of size – are an inescapable problem. On this matter Conybeare-Cross said, “we are always trying to find new spaces in Oxford that would work well for visual production. There isn’t a huge amount of choice but we’re really happy with the space we have for this one…it’s going to be loads of fun to transform”. Reluctant to reveal anymore, he concluded, “it’s the perfect size for what we want to do as well…that’s all you’re going to get I’m afraid!”

Keep Hush have even more exciting projects coming to Oxford: “We have our LEAN event on 5th March at The Bullingdon – our event promoting sound system culture. This will be a very special night as we’re hosting an Innamind Recordings tour, which are an American-based label, but pushing a very underground UK dubstep sound.  Quest, Karma and Las are all really involved with System, which people that know their dubstep will know all about.  With Gorgon Sound as well, it’s gonna be a really special night”.

Walk. Thru by Keep Hush is on Thursday 4th February