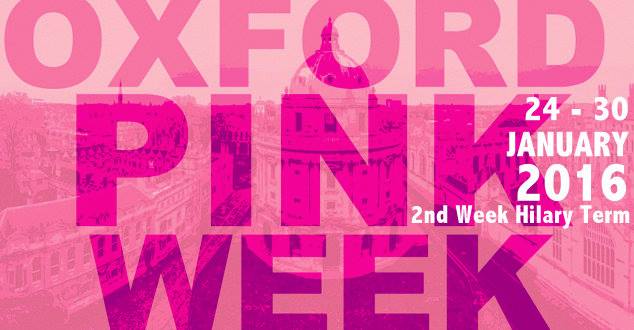 Inspired by the activism of the late Guardian columnist Dina Rabinovitch, Pink Week was established by her daughter Nina Rauch at Haberdashers’ Aske’s school in 2011. Since then, Pink Week has gone from strength to strength, growing into a nation-wide movement that enables students to raise funds and awareness to help fight breast cancer, and launching at universities around the country, including Bristol, Birmingham and Cambridge. Pink Week is running from January 24th-30th 2016, with the aim of ‘painting Oxford pink’.

Pink Week has been a storming success, having  raised over £1000 by the Sunday evening of last week alone. Proceeds will be split amongst three organisations. First is Coppa Feel, a charity that works to prevent the late detection of breast cancer through their team of Boobettes, young volunteers with a personal connection to the disease, who give talks and raise awareness in schools and campuses. The campaign is also supporting Hello Beautiful, a charity which runs exhibits and produces novel artwork in the hope of helping to remove the social stigma sometimes attached to a cancer diagnosis. The third charity that will benefit from proceeds is Breast Cancer Care, a charity that provides support and advice to patients diagnosed with breast cancer.

The organisers of Pink Week put on a week of “inclusive, personal and creative events for students and the wider community”, from a black-tie party at Freuds to a limited-edition G&D’s ice cream flavour launch. For those who prefer to stay in, they’ve even partnered with Deliveroo, who will donate £1 from every delivery made from January 24th – 30th to the Pink Week charities. They have also hosted speakers from the charities being supported, as well as talks from oncologists in the field.

The week kicked off with a charity Zumba session at St John’s on Sunday, followed by speaker events at Christchurch on both Monday and Tuesday. The week’s main event, Pink Night at Freuds, took place on Monday evening and went down a storm, hosting popular student acts such as Jack and Joel and Keep it Trill. Wednesday (#onwednesdayswewearpink) saw a donations collective outside the RadCam, whilst Thursday offered an Emergency Debate at the Union, followed by Pink Week Bridge. On Friday, Oxford’s own In The Pink will be performing a special set at G&D’s, followed by a breast-checking talk at Mansfield on Saturday to end the week on a serious note. Individual colleges will be participating, with bars offering proceeds from special Pink Week cocktails towards charity, and some college formals will also make donations towards the cause.

Breast cancer is the most common type of cancer in the UK. Around 50,000 women and around 350 men are diagnosed with breast cancer each year, yet more people are surviving diagnosis than ever before. Through spreading awareness of this disease and encouraging early detection, campaigns such as Pink Week bring us that much closer to ending breast cancer forever.

A Missed Opportunity for Civil Disobedience