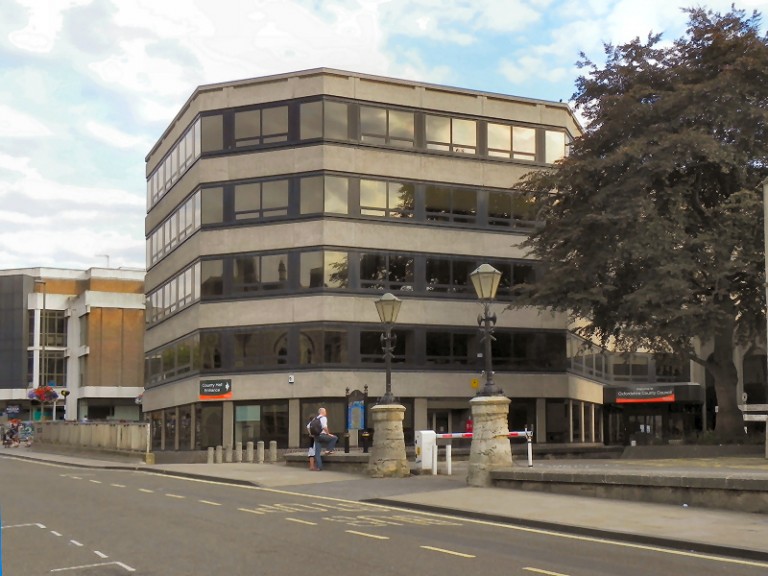 A large number of protesters gathered outside the Oxfordshire County Hall this Tuesday to make their voices heard, as the cabinet voted in favour of a new wave of cuts to services throughout the county.

These latest savings come on top of an existing shrinkage of the council’s budget by £292m between 2010 and 2020.

“Enough is Enough!” was shouted in unison by around a hundred protesters, hoping to dissuade the councillors from their eventual course of action – a further £69 million shaved off of their budget over the next four years. Bearing banners, placards and signs with a range of anti-austerity slogans, the crowd consisted of political activists, people particularly affected by the proposals, religious leaders, and students.

During the protest, representatives from “Save Oxfordshire’s Children’s Centres” were running a campaign to gather signatures for the pledge: “I pledge not to vote for any councillor in 2017 who voted for the closure of Oxfordshire’s Children’s Centres”. This effort was accompanied by a social media campaign, whereby photos of people contributing their signatures were uploaded to Twitter under the hashtag #pledge4children.

Many of the students at the protest were part of “On Your Doorstep”, OUSU’s campaign against homelessness. Jacob Vivian made a statement on behalf of the group: “OYD strongly opposes the cuts to homeless services. We believe that this will incur greater costs down the line and exacerbate an already big problem in this city. Central government cuts might mean the County Council has to make savings, but should the need for ‘savings’ justify society’s most vulnerable people, the homeless, having their only source of support taken away?”

After nearly an hour of protesting in inclement weather, the crowd chanted “Let us in!”, and were duly granted access to the County Hall, where some activists joined the cabinet to offer evidence and testimonies, with others filing into an adjacent room to watch the proceedings through a television link, or standing in the corridors outside the meeting to continue their protest.

Those presenting evidence to the cabinet were given three minutes each, and topics ranged from the removal of support for victims of domestic violence, to the discontinuation of subsidised bus services, to the closure of all 44 of Oxford’s children’s centres. After each testimony, loud applause rang through the building, as members of the public demonstrated their support and concordance.

In reference to council leaders previously describing the proposed budget cuts as “devastating”, one activist told the cabinet: “You do have a choice. If you genuinely believe these cuts will be devastating for Oxfordshire, you can choose to resign.”

There was repeated usage of the phrase “false economy”, with many speakers suggesting that the closure of all the children’s centres “will lead to a greater cost in future”. A doctoral student from Oxford University spoke of studies which show that children’s centres help to protect against “generational cycles of suffering” worsened by “adverse childhood experiences”.

The Rt Hon Andrew Smith MP who represents Oxford East, the constituency in which much of the impact of the cuts will be felt, told The Oxford Student: “These are appalling cuts, which will hit some of the most vulnerable of our fellow citizens hard, with wider damaging effects on the whole community.” He added that the cuts  “will have a very serious impact on many services, including, homeless support, elderly day services, and support for carers, and the 44 children’s centres across the city, as well as hitting mobile libraries and bus subsidies.”

Putting the issue in the context of the national political landscape, he went on to say: “The County Council has been placed in an impossible position by a Tory central government which is disproportionately attacking the budgets of local councils. I will continue to campaign against the impact of these cuts and the policies which underpin them, and to support our Labour County Councillors in standing up for local people and the services they need.”

The Chairman of Oxford East Conservative Association, Mark Bhagwandin, also spoke out against the proposals, saying that OECA is “formally opposed” to the closing of children’s centres, and that this has been their position since 2013. He added: “Oxford continues to feature too highly on the national indices of deprivation, and it is incumbent on us all to work hard to target poverty and deprivation”.

Mr Bhagwandin told the cabinet: “to close such valuable and vital services would be to defeat your own stated policy of prioritising support for vulnerable people”, and that he considers the cutting of these key services “a false economy, resulting in a higher cost rather than a saving to taxpayers […] because many of the services they provide will have to be picked up by other services in a much more costly and inefficient manner”.

Despite the efforts of the protesters and those who contributed their evidence and experience to the cabinet, the vote went in favour of the additional cuts. The final budget is yet to be approved by the full council, which will happen next month.