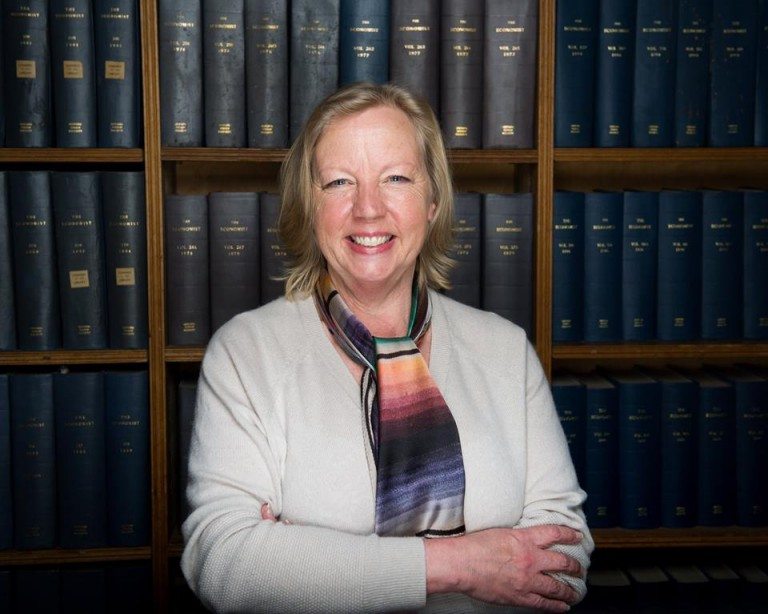 She practically skips down the aisle of the Goodman Library, finishes it with a slight jump, so eager to begin her speech. Meaden begins by apologising for her casual attire but she’s spent the day with the dogs and so is covered in their fluff. She races through her life story as if it was just a bog standard story to tell. You might find it hard to believe that this woman has an estimated net worth of £40 million.

What struck me about Deborah Meaden was how ordinary she was, not in a dull way, but how you would never expect, if you met her for the first time without knowing who she was, that she was worth this staggering amount of money. And from the sounds of it, neither neither can she. “After selling Weststar holidays I looked in the bank account and realised I was rich. I was a millionaire”. She doesn’t come with the Lord Sugar story that she sold electronics out of the back of the van and then suddenly made the jump to owner of a million pound company. “I never thought I’d be a millionaire” she says, pointing out that she just worked like a normal person and then got into the right industries and made shrewd sales and it accumulated until one day she noticed what she had achieved. “People ask me what’s my recipe to success, and I have to be honest with them and say I don’t know”, she laughs. Meaden clearly never thought she’d be where she was today.

Meaden is a lot less intimidating away from the cameras, out of the suit, and not surrounded by piles of money. She’s bubbly, friendly, and giggly. Maybe it’s because she’s been on TV since 2006 but it doesn’t feel like you’re talking to an absolute stranger. Her openness and friendliness make her a joy to talk to. She feels more like a family friend that you haven’t seen in a long time, one who walks the dogs and goes out for a Sunday roast, not the multi-million pound high-powered business woman she actually is.

I ask her about her image on the show that made her famous; Dragons Den. On the show she can be seen as steely and calculating, and even in interviews in the past she has said “I don’t have a soft side”. I find this hard to believe looking at this bubbly individual who has given up her day to go to a dogs home in Milton Keynes and who flies round the world to support incredible charities. With regards to Dragons Den she says the person on TV is her, the show is completely real and as close to real business as you can get on TV, but that the show only portrays a part of who she is. “I’ve invested over £3 million of my own money, I’m not going to be messed with or have my time wasted”. She says that her hand gestures, one of her defining idiosyncrasies, are either a sign of intimidation or that she has a feel for the business. In the den she is undoubtedly just being herself, shrewd as always. But I refuse to believe she doesn’t have a soft side. She laughs about twice a minute and exclaims “you don’t get these lines without a lot of laughter”. She dismisses the Sugar model that you have to be Machiavellian or Lord Sugar-like to get ahead in business, claiming Machiavellian is old fashioned and that you should just be happy and be nice to those you work with because then they’ll want to work. She has reprimanded employees in the past if they are rude to colleagues. Deborah does not throw out the image of a hard-headed business person, but this is clearly only a part of her. The rest of her is an ordinary person, living as normal a life as possible, separate from the money that has transformed her life.

She can sense that a question is coming up about Strictly Come Dancing and she jumps in straight away to talk about it. When I ask whether or not the decision to go on the show was a business decision to promote her brands and businesses, she replies “of course not! But I spoke it over with family and friends and I thought why not? When else am I going to get the chance to learn to dance. Life’s too short not to have a bit of fun”.

When I ask her if any of her TV endeavours have been to promote her businesses she still says no. She even had to be asked several times to do Dragons Den, fearing that the show might even have an adverse effect on her businesses if she got negative responses from the audience.

Discussing the difficulties of finding a job in the extremely competitive market, she gives nothing but genuine advice. “If you’re sending out the same CV to hundreds of companies and you’re not

getting a response, change your CV. If you’re not getting replies from a certain industry, try a different one”. Her pragmatic approach and dabbling in a range of industries is clearly what has been part of her success. She calls herself a “short term expert”, gaining knowledge in a range of fields when necessary and dropping them as soon as they become irrelevant.

Finally I ask her about an issue that has been plaguing the BBC: gender quotas. She has in the past said that she is not a feminist and she is totally against positive discrimination for anyone. “Quotas can’t be a long term solution so why implement them in the first place”. Meaden suggests positive discrimination would breed resentment. When asked how she felt about being the “female dragon” before the introduction of Sarah Willingham (who she can’t stop praising), she says “I was never the female dragon, I’m just a dragon. I’m not a woman in business, I’m just in business. Emphasising that I’m a woman just seems to lessen my achievements in a strange way”, feeling that the emphasising differences will only prolong them.

Overall, I am struck by how well I feel I know this woman who I have only been speaking to for a few minutes. Deborah is clearly a normal woman who worked hard and made some good decisions. She doesn’t feel she worked particularly hard at school, on the few occasions when she was employed by someone else she would clock out as soon as possible. No Cinderella story accompanies her, she didn’t sell electronics out the back of a van. She is just a normal woman, spending the day with the dogs, and spending all her spare time with her husband enjoying every moment of life together. She tells her husband kindly not to butt into her answers just in case he gives the real picture of what she’s like! She doesn’t hog the limelight; only doing three public speaking events a year. She is happy to give out advice to people and answers all questions put to her. Meaden is clearly an astute businessperson, and despite it coming so naturally to her, it is not what defines her. Deborah Meaden is clearly so much more than just the most formidable dragon in the den.